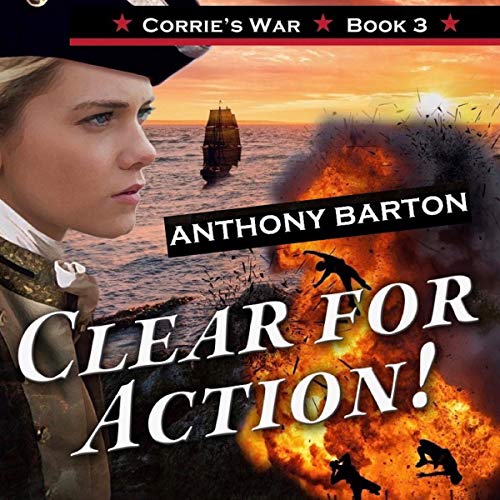 Corrie’s life is threatened by the evil Master-at-Arms Mr. Sly. Corrie meets the escaped slave Billy Brown, the captain of the Maintop, and wonders if Billy, too, is a woman in disguise. All the while, she feels the ambiance of a warship in the time of Nelson: scrubbing the deck, keeping watches, learning to speak the language, and to find her way from the cat lashings to the bilge hole.

Barton is careful about the language of the time and faultless in his description of naval customs and traditions. As you listen to the tale, you have to wonder why the historical fact that women served in large numbers under Nelson has been hidden from the public for so long. Here at last is a true-to-life account that helps to set the record straight.

England and France have declared war, and Corrie Harriman joins in on the action. Corrie’s War is a 16-part naval adventure series where Corrie joins the Royal Navy and must combat deadly enemies, navigate through hazardous storms, and even endure cruelty by the hands of her own crew. No one suspects that Corrie is actually a young woman - and she plans to keep it that way.