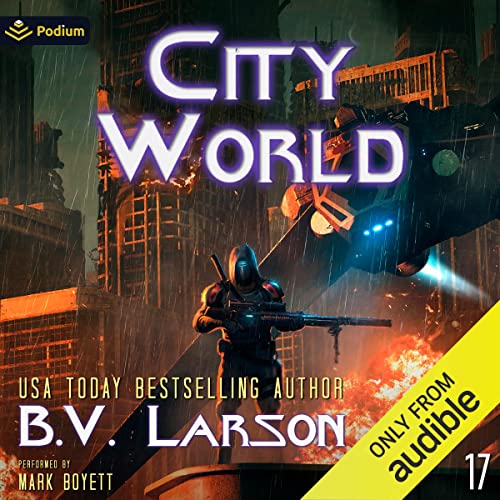 Earth’s entire fleet and all her legions are conscripted by the Galactics. Centurion McGill of Legion Varus is among countless troops pressed into service as cannon fodder for the Empire.

Not everyone on Earth is happy with the demands of the Galactics. Earth has built up her military for decades, and now she might lose everything in a foreign war no one understands. As the man who has killed more Mogwa than any other human in history, McGill is approached and given a mission. He has a fateful decision to make. Will he serve Earth’s overlords faithfully, or will he assassinate the arrogant alien leaders?

City World is book 17 in the Undying Mercenaries series, an epic saga of space battles and ground combat. With millions of his titles sold, USA Today best-selling author B.V. Larson is the king of modern military science fiction.

Keeping to the downward slope

Every time I see a new one pop up, I trick myself into believing that "This has got to be the one! This one will finally get back on the tracks!" Every time, for the last 4-5 books or so, I've come away more disappointed. Maybe the growing disappointment is causing a perceived downward slope and the last 5 books have actually just been of the same, formulaic, names and places replaced, quality, but who knows.

It's literally the same, exact story with the same, exact, lack-of-growth characters as the last 4 have been. The plot is the same, the cast is the same, the dialogue is the same- only the setting has changed, and really only in the most technical aspect. McGill is a dumb, womanizing redneck. The brass/his superiors (many, if not all, are outright traitors that apparently everyone forgot about) throw him into an unwinnable situation. He cheats and turns the tide and accomplishes something with galaxy-wide implications. The brass/his superiors take the credit (with who? Who knows. He deals personally with several of the highest ranked military and civilian authorities.) and go back to treating him like a dumb, womanizing redneck.

Any semblance of a series arc/plot is either gone, or so dissembled that it may as well be.

I very much hope that Larson stumbles back into the tracks of this series soon. It is/was such a fantastic series until the tracks curved and he kept going straight about 5km back. I'm not even sure if he could turn around and get back on at the point of departure at this point.. He needs to stumble back onto the original tracks or find some new ones to get on because this series has just been coasting on momentum and is getting bogged down quickly.

I think even Mark Boyett is tired of this story

This was my last go at giving BV a chance to revitalize this storyline to something worth spending credits on. And now, I am done with it. Like the title says, even Mark Boyett's narration seemed halfhearted this time... it's just dead stick at this point.

It’s important to make me laugh

And this audio book keep me company during my dose of plague. Laughing while sick is the highest honor

The most entertaining story to date.

Kept me involved from the start to finish. Larson weaves a fantastic story and Mark Boycott gives it life. I would recommend this to anyone that enjoys science fiction.

Worst of the series so far

The book is called City World. But you don't get to "City World" until like hour 9 or so. Then the world isn't a city. There is a large city on a world. Boring story. The best part of this book were the characters.

such a great series never dull

I do not know how he can write 13 books all the same but never a dull minute I know we all know the basics of what's going to happen to McGill but you can't stop listening. this should be a TV series it would be bigger than the walking Dead or game of thrones

One of my favorite series. Hate having to wait

Love this guy's sarcastic characters. The book is good, if you are listening you get what you want from this book.

Goods series but a little stagnant

I very much like the writing, world building and narration. however, the main character, known to be a scoundrel is becoming stagnant. There has been no growth or character arc for him and the world has advanced a little but still seems to be similarly stuck. I hope things begin to change or I will need to shelve this series for a bit.

this book addressed allot of the questions left after blood world and introduced a new interesting story line with the galactics . we the fans are on book 17 of the series and still want more. b.v larson if you read this next step is a tv series please 🙏 lol even an animated series like clone wars would be amazing 👏

I don’t know if I’m correct

I don’t know if I’m correct but I think there was some parts of the book that were change that weren’t for example when jink and Miguel and were negotiating they talked about bringing the gremlins to floramel not bringing floramel to the gremlins and there’s one more topic but I can’t remember what it was I don’t know if I’m right I just want the author them know that there might be some hiccups. But overall a great book

great book in a great series

As always thrilling and funny. Just a good listen.
The main character is relatable and the story keeps you listening for hours.