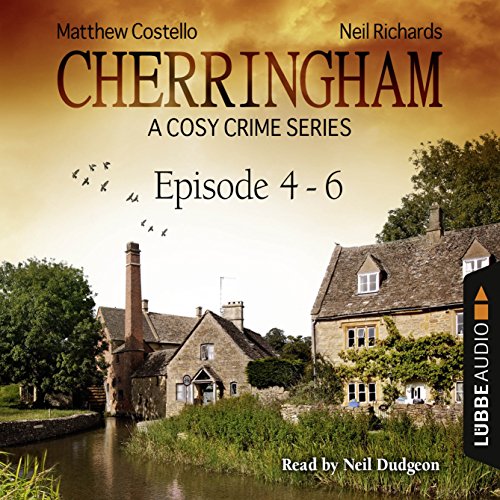 Jack's a retired ex-cop from New York, seeking the simple life in Cherringham. Sarah's a Web designer who's moved back to the village to find herself. But their lives are anything but quiet as the two team up to solve Cherringham's criminal mysteries.

This compilation contains episodes 4 - 6: THICK AS THIEVES, LAST TRAIN TO LONDON and THE CURSE OF MABB'S FARM.

Here Jack and Sarah get caught up in a mysterious treasure hunt. They tease out the truth behind the town puppeteer's death, and they're threatened by the ancient curse of a local farm.

Cherringham is a serial novel à la Charles Dickens, with a new mystery thriller released each month. Set in the sleepy English village of Cherringham, the detective series brings together an unlikely sleuthing duo: English web designer Sarah and American ex-cop Jack. Thrilling and deadly - but with a spot of tea - it's like Rosamunde Pilcher meets Inspector Barnaby. Each of the self-contained episodes is a quick read for the morning commute, while waiting for the doctor, or when curling up with a hot cuppa.

The narrator of the audiobook, Neil Dudgeon, has been in many British television programmes including the roles of "DCI John Barnaby" in "Midsomer Murders" and "Jim Riley" in "The Life of Riley".
©2016 Bastei Lübbe (P)2016 Lübbe Audio

Well written and love Neil's narrative, hope he does more books. I plan on listening to every one.

This is a great series and I'm glad I discovered it. I enjoy the interaction between Jack and Sarah. The mysteries are uncomplicated and interesting. I love this series and can't wait to listen to the next episode.

Hurry and get books 7 and 8 in English and on Audible. I don't understand why they are &quot;done&quot; in German first and then in English. Can anyone explain why?

I think this book was well worth the time.I enjoyed the entire reading.it held my interest from beginning to end.

I enjoyed this cozy series! Neil Dudgeon is one of my favorite actors and he doesn't disappoint in his performance here! Great characters and clever plots---an enjoyable escape into Cherringham😊

Matthew Costello and Neil Richards have created a series that is a very compelling listen. The characters are always fun, even if a bit two dimensional (which works fine in this series, where the stories don't have enough length to develop multi dimensions in the changing characters). Jack, an American ex-cop, living on a longboat in England, becomes friends with Sarah, a single mom--and they discover they each like "sleuthing" and are good at it together.

These are mysteries, but one thing I really like, is that each book is a series of several short stories instead of one long 7-8 hour book. One might think that there would not be enough time to develop really interesting stories--but in fact, so far each has been thorough, fun, a good whodunit, and just exactly enough details to let the listener get well involved. I suspect it takes more skill to craft more and shorter engaging new plots than to write just one long book (which are sometimes padded with extra "filler" material). And I've been impressed with the originality of plot details that these writers have used.

The narration by Neil Dudgeon (who plays the new John Barnaby in the long running Midsomer Murders series) is very talented also. He has an excellent range of voices--and matches them well to the characters. This series has a lot of creativity, clever writing, good plots, and are quite engaging. Low level on violence, and high quality on listening enjoyment!

Every bit as good as the first 3 novellas..

This was about a Roman Plate found on the farm of Pete, who was to share the monies that came from anything Jerry Pratt and his friend Baz discovered, with their metal detectors, on his land. But, the plate was stolen that same night and it was up to Jack and Sarah to find out who had stolen it.

Another fun little adventure for the detecting twosome.

Okay, this was about a murder of a jeweler/puppeteer who was supposed to be from Germany but it turned out he was from Romania. Jack and Sarah were looking into it but nothing seemed to make sense, until it did. It was a sad story but it turned out to be a great ending.

THE CURSE OF MABB’S FARM

A curse that was not a curse but Jack and Sarah had to figure out what was going on. And I have to admit I was really surprised at who was “causing” the curse.

Again I enjoyed these 3 novellas immensely. Not that edge of you seat read, just a calm little read that kept me calm and happy. I will definitely read all the Cherringham novellas. It’ll take me a while but I enjoyed Jack and Sarah so much I won’t forget them no matter how long it takes me to read them.

As to the narration: I can only reiterate what I said in the first 3 novellas I listened to. Neil Dudgeon does kind of stink at the women’s voices but he does everything else so perfectly I can look past that. His voice for the American Jack was simply awesome.

When I started series 1-3 I feared it would be cheesy...theme music the mix of James Bond and Sex in the City, NY cop moves to rural England...
In reality, it's completely charming. Great narrator. The characters are likable. The plots and mysteries are clever but not too dark nor dim witted. I've really enjoyed them.

Neil Dudgeon does a great job as narrator.

Enjoyed every minute of these stories.
Very well written.
Narrator Neil Dudgeon has a clear voice and easy to follow along with.
Recommend this series.

Honestly, I'm so much in Love with Neil Dudgeons Voice. It's perfect for this kind of Story, he voices the characters astonishing well, the accents and all. The Story is like always and in the first three episodes very nicely written. Slow but still enough action to be captivating.
The only problem I have is the failing audio quality. every now and then the audio breaks down. Maybe it's only my copy, idk.

Wonderful! So glad I stumbled over this series! The stories are short, but complete. Very good writing, lovely characters, great chemistry between the protagonists and an enchanting voice - just the thing before bedtime :)