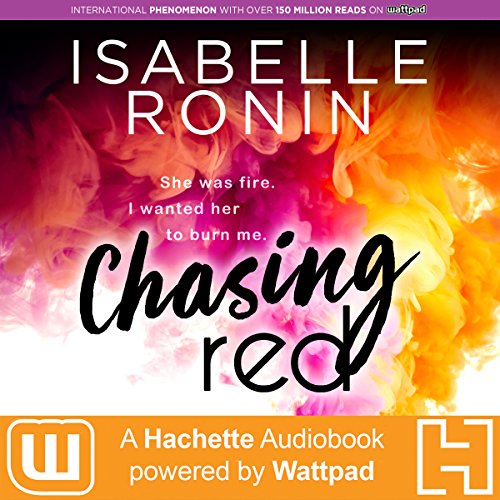 Chasing Red is a new release from Hachette Audiobooks: Powered by Wattpad - an innovative collaboration between Hachette Book Group, a leading publisher, and Wattpad, a passionate storytelling community of over 45 million people. Your favorite online stories, now available in your headphones!

Cynical and hardworking college student Veronica Strafford gets kicked out of her apartment. Broke and homeless, she wakes up in an unfamiliar room and unable to remember the events of the night before. She plans to make a fast exit but finds notorious basketball player Caleb Lockhart instead.

Caleb Lockhart has never been rejected before. He's rich and hot, and girls always seek him out. And he knows it. A girl in a make-me-sin red dress and red lips catches his attention at a club, and he playfully calls her Red. When Red rejects him, he is at a complete loss.

Intensely drawn to her, Caleb wants something for the first time in his life and pursues her. But Veronica's painful past is catching up to her, and her heart might just be the one thing Caleb can't win.

I loved this book when it came out on Wattpad, yet I was sad that the hero didn't narrate more of the story is he did ok the book originally.
This audiobook is absolutely worth the credit. It's so good and surprisingly very romantic.

Sigh, I wanted to love this book. I was so excited for a local author to me.

But for me I am just not a fan of dramalama or pretty much all the worst things that could happen to a character happens.
Angst ok I can deal but this was just over the top.

I don’t want to keep going about all the things I didn’t like. Usually I counter with something I liked but sadly I didn’t like any of it but the narration. It really was the only thing I enjoyed about this book.

I first read this book a couple years ago and loved it right away. I’ve reread it over and over and know it like the back of my hand, when it was first getting published I bought it on amazon and now it’s so worn that it’s barely legible! I got audible a couple months ago and never even thought of looking for this book on here, as I’ve been looking for new books to read, but I’m so so glad I thought of it. This is truest my favorite book in the entire world and you should definitely give it a try!!

The author is brilliant!

I love this story and can't get enough of it. I shared this book with my sisters and they also loved the story.

Love it Followed from Wattpad. Still so good - one of the first audiobooks i listened to

I am a little upset the the audio wasn’t like the book. It’s not the full story. I wanted to know what happened after he drove away.