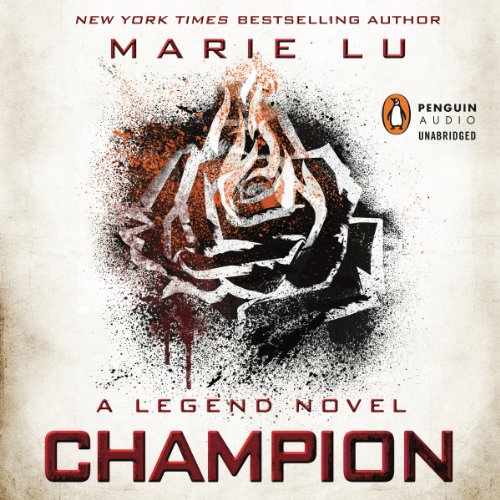 June and Day have sacrificed so much for the people of the Republic - and each other - and now their country is on the brink of a new existence. June is back in the good graces of the Republic, working within the government's elite circles as Princeps Elect while Day has been assigned a high-level military position. But neither could have predicted the circumstances that will reunite them once again. Just when a peace treaty is imminent, a plague outbreak causes panic in the Colonies, and war threatens the Republic's border cities. This new strain of plague is deadlier than ever, and June is the only one who knows the key to her country's defense. But saving the lives of thousands will mean asking the one she loves to give up everything he has. With heart-pounding action and suspense, Marie Lu's best-selling trilogy draws to a stunning conclusion.

Overall this series is a pretty good one. If you're looking for a distopian that is actually well written, not completely predictable (and GASP no love triangle, well not really) then I totally recommend this one.

I seem to be the only one who didn't love the ending. I don't know... June just got so self-sacrificing and melodramatic there towards the end. Other then being a little frustrated with our heroine this conclusion was a wild ride that I am so glad I got on.

So I stand alone in not "loving" the ending but I didn't and hate it and most days thats all a girl can really ask for.

I recommend this series to lovers of "The Hunger Games" and "Divergent" obviously..

I loved the hole series but I didn't like the ending that much. That's all

Decent story line, terrible everything else

The ending was at least not cookie cutter. The general dialogue and romance was eye rolling and “Day” felt like a girls version of a guy character.
The awkward narrators however were the worse part of this series

Horrible ending to the trilogy!!

I am at a loss was so invested in the story...but that was a terrible way to end it

Good book overall. I just didn't like all the love/relationship parts of the book. I do have to say the main focus on the war is great. (This goes for all three books.)

What aspect of Steven Kaplan and Mariel Stern ’s performance would you have changed?

They were not the worst. However, they both have parts of their voice that takes time to get use to but once your into the book its easily overlooked.

The ending was awesome with the many emotions and how quickly changes. It is somewhat predicable but still a great read.

This series is pretty good. This last book was hard for me to get into. Seemed like the first half lost some speed. However, the end ties up the series and makes it worth the read.

Overall I really liked this series and this last book. It's probably the most suspenseful of the three. I didn't love the ending. But that may be because I'm more of a HEA with a tidy epilogue to go with kind of a girl. You don't really get that with this one. Oh well. It's worth reading. So pick it up with YA Dystopian is your thing.

A decent ending to the trilogy

A decent ending to the trilogy. The first book was still the best, though, as with true with most books in this genre.

I decided to try audible and to my surprise I actually wasn't put to sleep by someone reading to me. I wanted to read the book but never had the time to go out to get I so this was overall very nice.

One of the saddest yet happiest books I have ever had the pleasure of reading.