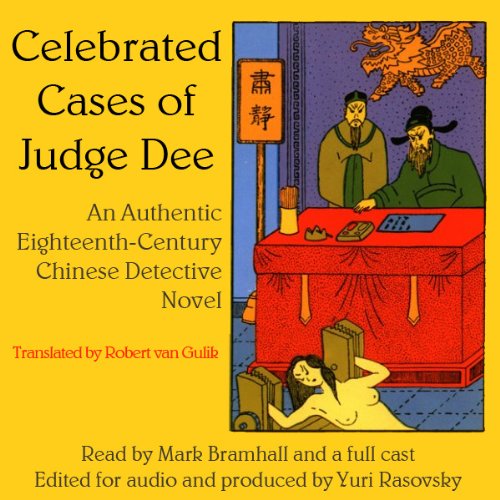 Long before Western writers had even conceived the idea of writing detective stories, the Chinese had developed a long tradition of literary works that chronicled the cases of important district magistrates. One of the most celebrated of these was Judge Dee, who lived in the seventh century.

This book, written anonymously in the 18th century, interweaves three of Judge Dee's most baffling cases: a double murder among traveling merchants, the fatal poisoning of a bride on her wedding night, and the suspicious death of a shop keeper with a beautiful wife.

The crimes take him up and down the great silk routes, into ancient graveyards where he consults the spirits of the dead, and through all levels of society, leading him to some brilliant detective work.

As explicitly detailed in the epilogue, this novel was supposedly written in the 18th century and recently translated from the Chinese language. The “translator” mentions that expectations for Western readers are so different from that of a Chinese public that any translation would require rewriting such a work. One may surmise that this did occur in this case, or even that the work published was totally invented by the self acclaimed translator.

In any case, the result is not to be recommended:

• The judicial system described is one where a single person acts as detective, prosecutor and judge, what profoundly hurts any sense of objective justice the reader may have;
• There are repeated occurrences of torture, presented matter-of-factly, as the accused must confess their crimes before being condemned;
• Cases are resolved largely as a result not of deduction but of dreams or visions;
• Characters are essentially flat, including Judge Dee himself whose thoughts, motivations, background, ambitions and personal life are totally undisclosed; his workload does appear uncannily light to a contemporary audience.

Overall this novel conveys the image of a society completely submerged in hierarchy, convinced of its superiority, and is of little interest.

If you could sum up Celebrated Cases of Judge Dee (Dee Goong An) in three words, what would they be?

The judge switched from case to case and they all seemed unrelated and insoluble, but in the end, although the crimes occurred over great distances at times, they seemed to all fit together into an intricate pattern. And the Chinese practically invented paranormal mysteries! They are full of dreams and ghosts and visions of the afterlife. The most wonderful thing about these books though is not just that the stories are great mysteries, the atmosphere is evoked so well and the characters so memorable, but that it is based on a real historical person and the real ancient Chinese entertainment form of detective stories. The explanation of how these stories are converted to suit Western tastes is fascinating. I read these books in paper before taking a Chinese History class and found that the information on ancient Chinese culture contained in the stories was great preparation for the class.

I liked the old guard who showed Judge Dee and his other officers to Turnip Pass.

I found it very moving that the rule at the time--which Judge Dee was prepared to follow--was that if a prisoner was tortured and turned out to be innocent, the judge and his officers were to be executed in the prisoner's place. I imagine corruption of justice occurred anyway among lesser officials but if you followed the rules, you would be very careful. I wish today's justice were as scrupulous.

I want more Judge Dee audio books on audio please. Their cross cultural background and atmosphere is even better than the stories themselves and is the sort of thing that narration immerses you in even more completely than the written word.

A fascinating look inside a legal system much older than our own. Two jarring notes to modern listeners, the use of torture in court, and Judge Dee's reliance on supernatural influences to move a case forward, were nevertheless parts of an administration of justice that lasted more than a thousand years. The performers did a good job all around, and I wish there were more Judge Dee books on Audible.

narration excellent. plot captivating, as the epilogue states this isn't you typical western detective novel but it's still wonderful in its uniqueness

I first read Judge Dee back on the 80's when I was looking for something different. These stories did not disappoint. I do not enjoy the tourture aspects, however, (even the U.S. Has recently practice tourture for ways and means, unfortunately). But these stories do show the wisdom of the Judge Dee in solving each problem and keep one in suspense in how he will eventually solve each case. I truly recommend these stories to anyone interested in something a little different and new.
These stories are well written, placing the reader in the culture of the time.
I encourage any mystery reader to give Judge Dee a try, I don't believe you will be disappointed.

For those who appreciate the translations of van Gulik, this current work will please and satisfy. Very well narrated, the listener will be transported to an era long ago expired. The morals and lessons if the story fit both ancient times and current life. The listener will be left satisfied and wanting the story to go on.

listen to the afterword first

I would have enjoyed this book more if I had understood it's history and how Chinese works of this genre are formulated. I approached this book as if it were a normal mystery and was prepared to enjoy it, but found many of it's features unenjoyable. the afterword specifically discusses this phenomenon amongst western readers. if you know more of what to expect you will likely enjoy it more. it was very well narrated

Having read all four of van Gulik's Judge Dee books, I can only ask for more so I can listen. They are all so fascinating in so many ways--historical, psychological, and mysterious.

An excellent introduction to Judge Dee!

I found both the Narration performance and the sound quality to be first-rate! I was at first worried that the advertisement of this being a "full cast" recording was false until I got further into the recording and discovered where the rest of the cast came in. This book us different from most mystery tales (as explained in the author's notes in the final chapter) but the story is very interesting and entertaining.

interesting historically about china in the 18th century; if you are looking for a good detective read try someone else;