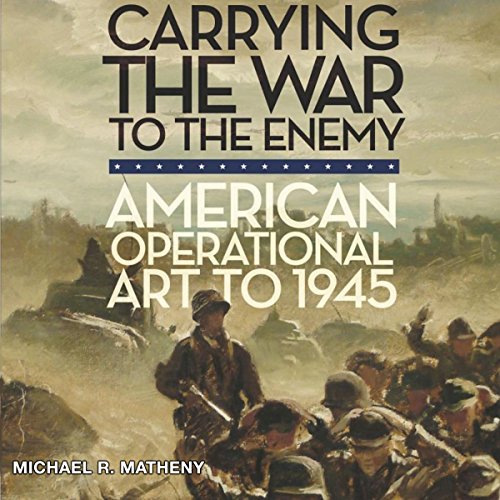 Carrying the War to the Enemy: American Operational Art to 1945

Military commanders turn tactics into strategic victory by means of "operational art", the knowledge and creative imagination commanders and staff employ in designing, synchronizing, and conducting battles and major operations to achieve strategic goals. Until now, historians of military theory have generally agreed that modern operational art developed between the first and second world wars, not in the United States but in Germany and the Soviet Union, whose armies were supposedly the innovators and greatest practitioners of operational art. Some have even claimed that US forces struggled in World War II because their commanders had no systematic understanding of operational art.

Michael R. Matheny believes previous studies have not appreciated the evolution of US military thinking at the operational level. Although they may rightly point to the US Army's failure to modernize or develop a sophisticated combined arms doctrine during the interwar years, they focus too much on technology or tactical doctrine. In his revealing account, Matheny shows that it was at the operational level, particularly in mounting joint and combined operations, that senior American commanders excelled - and laid a foundation for their country's victory in World War II.

Examining in detail the development of American operational art as land, sea, and air power matured in the 20th century, he shows that, contrary to conventional wisdom, US war colleges educated and trained commanders during the interwar years specifically for the operational art they employed in World War II.

Published by University of Oklahoma Press.

"Matheny fills a vacuum in military historiography with this book, while reminding us that great victories are not won by accident." - Military History