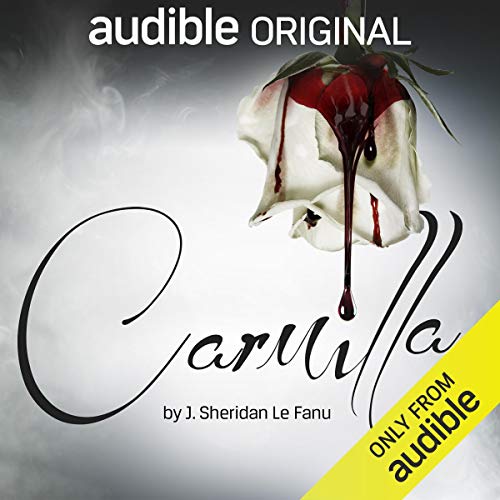 One of the very first vampire thrillers, this audio adaptation follows 18-year-old Laura as she recounts the story of her mysterious, intriguing and beautiful house guest Carmilla, who is stranded in the forest after a carriage accident and taken in by Laura’s widowed father. The girls develop a friendship which turns into a passionate meeting of souls. A relationship of vampire and prey, the story is told through Laura’s eyes as she is drawn further into Carmilla’s terrifying world of pleasure and pain.

Carmilla has been dramatised by Robin Brooks, an actor, dramatist and author who has been working as a playwright for over 25 years. Carmilla was directed by Fiona McAlpine of Allegra Productions for Audible Originals.

The story was ok. It's definitely dated. I really didn't enjoy the story till chapter 3 when the truth came out and the hunt began.

The narrators and sound effects were great though. Each character was a different narrator which really helped bring the story to life. Overall, I am glad I listened to it but I didn't love it.

Rose Leslie is delightful to listen to. She is the best thing about this performance. Carmilla is dark, atmospheric, gothic... but too predictable to be scary. I wasn't familiar with the novella but I read that it was one of Bram Stoker's inspirations for Dracula. So I may have found it so predictable because of similarities with Dracula. Three stars for the story; five stars for the performance; four stars overall.

Couldn't hear many of the performers

The main character of the scene was usually clear and loud enough, but additional characters could often not be heard. I got tired of adjusting the volume.

I can't fault the performers. They had to follow the script. I am afraid I couldn't get further than the first five minutes or so, the story is so bad. I'm just glad that I didn't pay for this.

Tremendous production, fantastic in its delivery!!

My personal favorite audiobook and I constantly listen to them while driving over an hour to college each way. Such a five star quality performance it makes me want to change my previous five star ratings. Never before have I taken such time in enjoying a book. I listened to each of the three chapters many times over and over, not because I had to but because I truly wanted to savor the performances.
The acting is engaging and of the highest caliber. The writing is of the finest literature quality and I am an English major. This one cones with any sort of the most high praise to purchase and enjoy again and again. Do yourself a favor and purchase the ticket, sit in a quiet room if you can, and allow the sounds and words to bathe you in delight.

I didn't read the story, but I don't imagine it could be as engaging as this dramatization. The acting and theatricality were perfectly executed and the suspense was well developed. In terms of plot it's probably typical for the genre, but the distaff characters and the blurred lines between life and afterlife, between love and vampirism make this a great piece.

Waste of time listening to this book. If you want to listen to breathy narration for 3 hours and a hard to follow story line. Then this book is for you.

Tech Problems. Not the actors' fault.

Sort of. It randomly jumped back to the beginning at least a dozen times.

What other book might you compare Carmilla to and why?

It certainly appears that Bram Stoker got his ideas from this story.

The tech problems ruined it. The foremost voices were too loud, so I turned down the volume, then those actors who chimed in needed more volume and I tuned it up which resulted in the first voices who reappeared blast out my ear drums--the words ending in "s" sound like hisses. As a runner, I resented having to continually stop to adjust the volume and to try to find the story after the book inexplicably jumped back to the beginning ("This is Audible")--over and over. On the bright side, the actors are quite good and a movie with them would be terrific..

Too much breathing in my ear

I'm the kind of person who personally can't stand the sound of someone breathing in my ear/ears under any circumstances. This was just way too breathy for me. I couldn't get through the first 3 minutes.

This was so beautifully done! I listened to the production as I read along with the book and it really helped me visualize the story! My only dislikes was that some character names had been changed and not mentioned i.e Lafontane was not included as well as the mention of Baron Vordenburg which was replaced by the doctor. When reading along, it skipped some parts in the book and dialogue was added but was well done and allowed more character development instead of just hearing Laura's thoughts. Overall, amazing and will definitely be listening to it again. Highly recommended!

I liked the roles and the readers. The story was intetesting for a Vampire story.