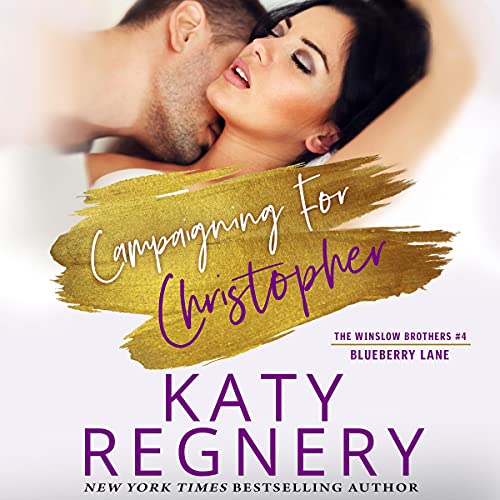 Christopher Winslow, the youngest of the four Winslow brothers, was born with a silver spoon in his privileged mouth, which has made it difficult for him to establish his credibility in the fast-approaching congressional race. Working against the clock to assure Pennsylvania voters that he is forthright, trustworthy and able has been an exhausting challenge, but Christopher's chances at beating the incumbent look good.

Julianne Crow, a plus-size model struggling to make ends meet, jumps at the chance to make a little extra cash on the side. What does she have to do? Slip something into Christopher Winslow's drink and take some very naughty pictures with him.

But Christopher is nothing like Julianne expected, and when her actions sabotage his hard-earned campaign only a month before the election, her guilt is overwhelming. She offers Christopher her help in an effort to repair the damage she's caused, but can anything change the fact that he sees her as an opportunist and a mercenary? When she starts campaigning for Christopher, he may find out there's more to her than meets the eye.

Return to the world created in the English Brothers books with this fresh foursome of scorching hot Winslow Brothers!

Jules was the exact type of racist she falsely accused Chris of being. She grudgingly helped restore his credibility she thoughtlessly ruined. She didn't show enough remorse for her wrongs doing, imo. I had a hard time getting past her initial vile actions. Once again this author has made a supposed heroine unlikable for me. smh. I voluntarily listened to a free copy of this and am giving an honest review. The narrator was okay.

A good conclusion to the series

I’m all for a romance that dares to touch upon tough subjects. Here, with a native American main female character, we get both the interesting details about another culture–and not just the exotic aspects, but also the hard reality of every day life–and the examples of racism one from another culture endures.

Chris and Julianne couldn’t have been more different, and I felt it was a bit too on the nose. So much that the author have to find complicated connections between them–that don’t make much sense–so they can relate a bit to each other. When I feel that differences can sometimes be what brings people together, through curiosity and open mindedness.

There were some fascinating elements in this book. The political scandal was one of them–though it was mostly used as an excuse, as they never seriously search for its origin. The changes Julianne decides to make to honor her promise are another. It was really beautiful to see her bloom, even though she was already a fierce lady. But at the beginning, she’s badass because she’d do anything–almost–to survive, while in the end, she learns how to take charge of her life. I loved that.

I also loved the romance itself. We have two characters who feel a strong attraction for each other right at the beginning, but who can’t act on it because they’re supposed to hate each other. Except that we quickly see there’s no real hate, and we just have to wait before they realize it too. That makes for a slow burn, because they need to accept their feelings first. But there’s some tension along the way, and I enjoyed that.

The same narrator as that of the other books of the series, comes back for this one, and she still does a good job. Sometimes her voice is still too low or too delicate , but she shows she can express stronger emotions. A good conclusion to the story of the Winslow brothers.

Atoning for a devastating lack of judgment

I asked to receive this free review Audible book and wrote this unbiased review. Katy Regnery has written a fascinating enemies to lovers romance. Her character and plot developments are superb. Julianne learns the hard way to make sure that you have creditable facts before judging someone. In order to atone for her devastating lack of judgment she agrees to help Christopher try to save his congressional election. This will be a rocky road to travel. The fun and some heartache come as they begin to fall in love. There are some great supportive secondary characters. Watch out for a sister's wrath when you hurt her brother!

Lauren Sweet did a wonderful job of portraying the emotions and personalities of these characters. She made me feel like I was an eyewitness to the entire story. Her storytelling ability made this such an amazing book to listen to and enjoy.

I highly recommend this Audible book. The author and the narrator make you hate to see it end. Definitely a book that I will listen to again.

Love this one so much!

Omg! I loved this one soooo much! I really enjoyed Juliann and Chris! They are adorable and have that spark! When he told her to let him know when he can touch her...then she did...that scene was so H-O-T and gave me tummy flutters. I loved that she was Indian and a model. It worked really well in this story. I understand how mad Chris was and how he struggled to trust her. I loved their attitude, sizzle and fun. I think this just became my fav in the series!!
I did listen to this on audio. Lauren Sweet did amazing with this one.

When it comes to love the gloves come off.

DON'T GET MAD, GET EVEN. When it comes to love the gloves come off. The one thing that Julianne and Christopher have in common is the ability to develop tunnel vision. Once they make a decision nothing can alter their focus. That skill can prove an essential asset when you have all the facts but fatal when based on hearsay. Julianne learned this the hard way. She let bias, anger and pride mislead her and wants to make amends, Where Julianne's pride influences her actions, Christopher's heart influences his. Trusting too easily may have cost Christopher everything he worked so hard to accomplish. A little luck, a lot of faith and a guardian angel may help make all Christopher's dreams come true. Campaigning for Christopher proved to be a real pistol in Katy Regnery's arsenal of stories. Neither Christopher or Julianne were willing to back down and that made the story hotter than any erotic novel.

Seems like a writing rush-job. There were several story lines that got some attention but were never addressed. Least favorite of the series, but had so much potential.