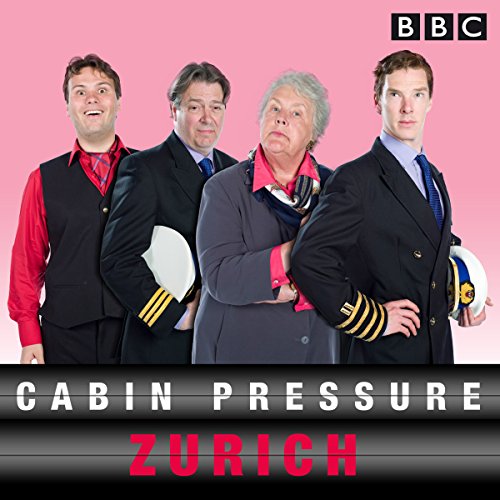 The complete finale of the hit BBC Radio 4 sitcom- 2 episodes.

Cabin Pressure is set in the wing and prayer world of a tiny, one-plane airline, staffed by two pilots, one on his way down, and one who was never up to start with. In this, the finale of the whole series, we discover that for MJN Air, whether it's choosing an ice-cream flavour, putting a princess in a van or remembering your grandmother's name, no job is too small, but, many, many jobs are too difficult.

Carolyn Knapp-Shappey, MJN Air's formidable boss, has employed two of the very cheapest pilots money can buy. Captain Martin Crieff, who's always wanted to fly and won't let a little thing like lack of ability stop him, and First Officer Douglas Richardson, smooth-voiced old sky-god and eternal schemer. Passenger service is provided by the relentlessly cheerful Arthur, proud inventor of both Surprising Rice and his own hat.

"The more I listen to John Finnemore's Cabin Pressure, the more I think what a stonking masterpiece it is. Perfect in every department." (Philip Pullman)

Best comedy series of all time!
Touching and hilarious, wish it never ended. Once you start it you won't be able to stop till you've heard them all.

I was so excited to see this final episode arrive on Audible, I quickly downloaded and listened to it...and I was not disappointed. This episode is an hour long; the first part sets up the scenario (and, to be fair, it's a little long and sometimes confusing), but without it, the payoff in the second half would not occur! It's a great episode and completes the series in a satisfactory and extremely funny and appropriate way.

I don't know what I will do without the crew of MJN Air...they have entertained me for hours on my commute and I will miss them terribly.

it's a sad fairy tale ending...BRILLIANT!

I am sad that this is the last episode. I have so enjoyed Carolyn, Martin, Douglas, and Arthur and all the rest of the madcap characters. Excellent fun.

Such an incredible show

I drive 50 minutes each way to work every day, and it's always so boring. Nothing brightens up my day more than this piece of brilliance by John Finnemore. Just so incredible. Highly recommend!

Such fun! Absolutely love the characters and the humor, I listen to it again and again! So sorry there aren't more.

Great wrap up to a series I was sad to see end. But the end was satisfactory in wrapping up all the stories in the same way the series was. Goofy fun. A nice change of pace. will be looking for more by Finnemoore. He is good.

I came for Benedict Cumberbatch's voice, left completely in love with John Finnemore's brain. He's ridiculously clever and Arthur is the funniest, most entertaining character I have come across. His delivery is perfect.

Wonderful end to a wonderful series. I will forever purchase anything written by John Finnemore! Just good clean fun genius! In a word "BRILLIANT!" ;)

Wonderful writing, true character development, jokes you must be smart enough to understand. Loved it. Have listened to it over and over.

Cabin pressure is really funny and so clever. I loved it all from series 1 to 4 and then the final episode "Zurich". The most entertaining audio books I have bought.

What a wonderful way to conclude the story

I hesitated a while before I bought the last part of Cabin Pressure because I thought 55 minutes were a bit short. I was wrong, without this last part something is missing, we have a happy ending, all the story lines are tied up. I was left with a feeling of saying goodbye to old friends, really a funny story but touching as well.

Amazing. Great to have Martin in Switzerland in the end. Come and visit :D Great Fun! Great Voices! Funny Stories!