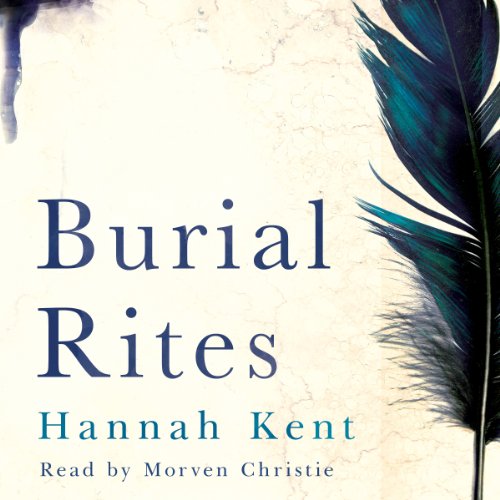 They said I must die. They said that I stole the breaths from men, and now they must steal mine. I imagine, then, that we are all candle flames, greasy-bright, fluttering in the darkness and the howl of the wind, and in the stillness of the room I hear footsteps, awful coming footsteps, coming to blow me out and send my life up away from me in a grey wreath of smoke.

In northern Iceland, 1829, Agnes Magnúsdóttir is condemned to death for her part in the brutal murder of her lover. Agnes is sent to wait out her final months on the farm of district office Jón Jónsson, his wife and their two daughters. Horrified to have a convicted murderer in their midst, the family avoid contact with Agnes. Only Tóti, the young assistant priest appointed Agnes’ spiritual guardian, is compelled to try to understand her. As the year progresses and the hardships of rural life force the household to work side by side, Agnes’ story begins to emerge and with it the family’s terrible realization that all is not as they had assumed.

Based on actual events, Burial Rites is an astonishing and moving novel about the truths we claim to know and the ways in which we interpret what we’re told. In beautiful, cut-glass prose, Hannah Kent portrays Iceland’s formidable landscape, in which every day is a battle for survival, and asks, how can one woman hope to endure when her life depends upon the stories told by others?

"This dark 'love letter' to Iceland from a young Australian novelist tells of the final months of a convicted murderer, and is filled with a sublime, heart-racing imagery." ( Sunday Telegraph)
“Beautifully written, this is a novel that will draw you in and touch your heart. Agnes will stay with you long after the last page has been turned.” ( Daily Express)
”This is a tormented tale of love and betrayal and divided loyalties recounted with heartfelt honesty… An exceptional debut.” ( Sunday Express)
”The true story at the heart of Hannah Kent’s acclaimed debut couldn’t fail to be compelling, but what impresses most about this novel is the skill and power with which Kent conveys the bite of poverty, hunger and loneliness and the oppressive, sinister weight of the portents and nightmares that convincingly plague those who dwell in the harsh Icelandic landscape. Startling and disconcerting details abound… bringing the past vividly to life even while underscoring its distance from the present. Resurfacing once the last page is turned is an effort.” ( Daily Mail)
”This is a truly powerful novel, beautifully written, which proves the phrase that ‘life is nasty, brutish and short.’ Desolate but brilliant.” (Book of the Week, The Lady)
“This is a golden age both of historical fiction and of crime writing. A rare novel that combines both, this is one of the most gripping, intriguing and unique books that I’ve read this year.” (Kate Mosse, Metro)
"an announcement of a writer to watch" ( Guardian)

Worth stepping out of your comfort zone

Would you listen to Burial Rites again? Why?

Yes, I'd like to listen again to pick up on some of the smaller details/descriptions

Agnes, the character really drew me in.

Which character – as performed by Morven Christie – was your favorite?

Agnes. Morven Christie is an amazing performer. As Agnes her often breathy tone really brought across the feeling of despair. All of the characters are done well. You hardly notice a change in her voice yet it sounds like different people are reading.

If you could rename Burial Rites, what would you call it?

I bought this book purely based on the fact that Morven Christie was the narrator. I hadn't heard of it before and probably wouldn't have given it a second glance otherwise. I was not at all familiar with the real life event and found this work to be quite surprising and very interesting. I'm now off to google it to learn more :)

This is such a great story...Used a box of tissues. Couldn't stop listening! Loved the characters! Could feel the harshness of the environment. Will listen again...

My heart is broken!

The pain and suffering I experienced listening to this was intense. Beautifully written. Haunting. Perfection!

Would you consider the audio edition of Burial Rites to be better than the print version?

Undoubtedly. The story itself, though well written is a bit disappointing. There is a lot of build up but it doesn't end up leading anywhere. I might not have continued to the end if it weren't for the wonderful narration.

The detail of life in 1800's Iceland was infinitely more interesting than the story itself.

EVERYTHING. This is actually the second book I have bought from Audible with Morven Christie narrating, though I didn't notice at first as the other performance was very different and in a Scottish accent. Each character's voice is distinct and clear, when they story says they sound tired or anxious, they do. I will definitely be listening to any future offerings by this narrator.

I cannot write a review that can do this book justice. This is what goes through my head:

* I am so happy I give few books five stars, because then when I run into a book this good my five star rating means something!

* You need a strong stomach for this book. I have warned you.

* Once you start you will not be able to read or do anything else.

* There is NO humor in this book. I always need humor, except NOT here. Don't ask me why! I just didn't need it. I was riveted from start to finish. I needed to understand the relationships that lie at the core of what happened. I was so focused on understanding the why, I didn't have any need for humor. Humor simply doesn't belong in this book. This is Nordic historical fiction of times long past - there is hunger and cold and darkness. That is the way it was. And people living in such difficult times did such twisted things.

* The book is NOT spooky, it is atmospheric.

* The writing! Similes, metaphors - they are all just perfect. Stunning writing.

* And this is very important. Do not read this book. Please, if you possibly can, listen to it. The narration by Morven Christie is totally fantastic. The Icelandic is perfect. The tempo is slow and it must be slow, so you can think about what is being said, so you feel the doom and darkness of the events. This is an excellently written book AND excellently narrated. BOTH!

Phew, after this I don't want another Nordic drama for a long time. My emotions cannot take it. I have been through a wringer with this one.

I assume you have read the book description, so you know that this story is based on true events. There is a chapter at the end that explains all the research involved. The author closely follows what is known. There are different views of Agnes' behavior, but the author has totally convinced my of what her study of the facts have lead her to believe.

This is one of the best books I have read/listened to this year.

After half:
I have listened to half now. I still absolutely love it. It has love too. One of the few authors that can feed me a love story and please me immensely. I am convinced Agnes did not kill the man she is accused of killing. But history says she is beheaded for this reason. Remember this is Nordic historical fiction! Now I will say no more. I don't know what will happen in the rest of the book, so I cannot possibly give a spoiler.

You read this book for the marvelous atmosphere and the lines. Gorgeous lines! A superb writer.


After 6 chapters:
This book is beautifully written. Atmospheric. Nordic historical fiction at its best. The narration by Morven Christie is wonderful too. Don't read it, listen to it. I have only listened to 6 chapters, but there is no way this book can get anything but 5 stars.

I really wanted to like this book. It may be me ... I just can't tolerate the narration. The narration was described in one review as haunting but it's more like a half-asleep, depressed, numbing and out of body combination. I tried several times and the more I listened, the more depressed I felt. And yes I understand the subject matter is sad, the landscape is bleak ....it does fit the book. I did listen to the sample, but I failed to consider the number of hours I would spend wrapped in it's "mood". The narrator may be a great narrator for other books - she has a soothing, pretty voice, good diction. This combination just didn't work for me. I thought I would enjoy the book based on reviews. The story may be great - it sounded really interesting and I liked the premise of the story - I'd like to know what happens, but unless I find the time to read it in print, I'll never know.

Morven Christie narration possibly the best ever I has listened to on Audible. Well researched, well written. Author has powerful command of metaphor.

Burial Rites is an absolutely unforgettable and magnificent novel and one of my new all-time favorites! The narrator was perfect!

Intelligent sensitive storytelling... I could not put it down. Narrated with the necessary understanding and sensitivity. Highly recommended.

If you could sum up Burial Rites in three words, what would they be?

I was taken in by the main character and wanted to hear her story as much as she wanted to tell it.

What was one of the most memorable moments of Burial Rites?

I could have cried when Agnes realized what kind of man Natan was.

Which character – as performed by Morven Christie – was your favorite?

I enjoyed the two girls and the way they gave some relief from the intensity and bleakness of the novel.

If you could take any character from Burial Rites out to dinner, who would it be and why?

Margret. I would like to hear more of her thoughts. She also had a death sentence of a different kind.