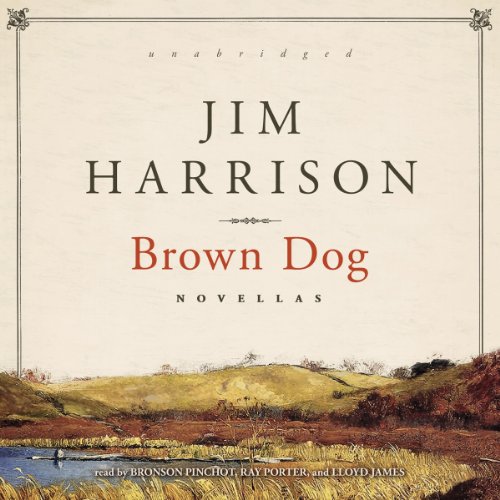 New York Times best-selling author Jim Harrison is one of America's most beloved writers, and of all his creations, Brown Dog - a bawdy, reckless, down-on-his-luck Michigan Indian - has earned cult status with readers in the more than two decades since his first appearance. For the first time, Brown Dog gathers all the Brown Dog novellas, including one never before published, into one volume - the ideal introduction (or reintroduction) to Harrison's irresistible Everyman.

In these novellas, BD rescues the preserved body of an Indian from Lake Superior's cold waters; overindulges in food, drink, and women while just scraping by in Michigan's Upper Peninsula; wanders Los Angeles in search of an ersatz Native activist who stole his bearskin; adopts two Native children; and flees the authorities then returns across the Canadian borderaboard an Indian rock band's tour bus.

I had never heard of Harrison or Brown Dog before this collection came out. I am so glad I took a chance on something new! Brown Dog is a rascal who drinks too much, womanizes too much, and works too little. Although not politically correct, I identified with him and laughed out loud as he found a way to make ends meet in the UP (Upper Peninsula of Michigan).

Although many will be turned off by this simple and self centered man, he is also thoughtful, soulful, and loyal. He takes care of and helps out those he comes in contact with and doesn't exploit those who are down on their luck. Happy and content to fish, and able to survive on very little, I delighted in his full on hedonism and acceptance of life as he found it.

I downloaded this story simply because of the title"Brown Dog". Call me crazy but by the time I finished listening to the story of the hapless, hopeless, gentle, unaffected man, I was in love. Such a wonderful depiction of North American wilderness added immensely to this sometimes very funny, sometimes excruciatingly poignant story. Some overtly 'scenic' reflections of BD's sex life made me laugh out loud and/or cry.

What a deeply "human" man, is Brown Dog.

Well, the performers were pretty marginal. The first reader either couldn't read, or was trying to give the impression that Brown Dog, the main character was learning disabled, (BD certainly is not!) One of the later readers was so ignorant of rural life that he pronounced "mow", as in "The hay mow in the barn" as "moe", like "mow the grass". Are there no editors?

I enjoyed the sedately paced story of a free man dealing with the modern world. It is set in the same country, rivers and woods as Hemingway's "Nick Adams" short stories, but several generations later and from a very different, but oddly sympathetic viewpoint. The stories did nice job of taking me to the deep woods of the Upper Peninsula, with their natural beauty and the idiosyncratic characters who inhabit them, and showing me the world through the eyes of a man with far fewer inhibitions than I. Because I found Brown Dog"s view rather appealing, I'd be a little wary of recommending this as a good read to my very feminist wife. I might well get in trouble for even identifying with, much less, rather liking Brown Dog. A good, if not great book. Well worth the time and money.

Enter the mind of a 'natural' man

I was a bit startled with some of the activities BD got up to but as the novellas progressed I started to care about this man and how his life was progressing, (not always the most appropriate word to describe his passing years), not a good man or a bad one, just one who loved his part of the world. A worthy listen.

Jim Harrison is one of the best writers I have ever listened to. Brown Dog will forever be in my memory as one of the most unique individuals ever created in literature. How a writer could create such a detailed three dimensional character as BD is nothing short of genius. This is also a wonderfully engaging book with many unique characters, both human and animal, and upstate Michigan rural adventure. Lots of trout fishing, hunting and bawdy sex. Listen to this book!!!

Really enjoyed the story of Brown Dog and all of his shenanigans. Will check out something else by Jim Harrison soon.

Please, please edit the recording and correct the pronunciation of the local towns! SEENEE is how Senegalese is pronounced; MEUnising. There are others I fail to recall.

Great book but it was very annoying trying to get used to different readers for each story. I wish they would have stuck with the same reader throughout.

Great collection of Harrison novella’s bringing together the collective narrative of a decade or so Of the life of BD. Will likely listen to this over again several times. The change in narrators is slightly jarring but after a few minutes your comfortable with it and chuckling and enjoying the tale.

Lloyd James is a poor narrator

The way Lloyd James whispers every female line in the last novellas is obnoxious and insufferable. You can’t hear what the lines are and it’s incredibly annoying, pretentious and unnecessary.