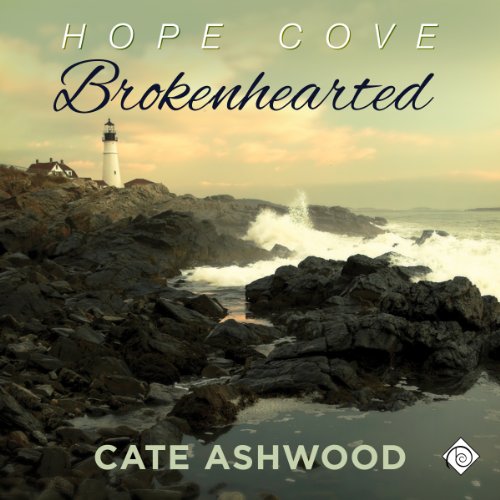 Oliver Parrish has been alone in the world since he was born. So when Sheriff Owen “Mack” Macklin shows up on his doorstep to deliver the news that Oliver's sister has died, he's beyond surprised. Still, Oliver returns with Mack to Hope Cove, Maine, hoping to get to know the sister he never knew he had. As he tries to snap these new elements into his solitary life, he's not sure how they might fit.

His life is shaken up further as he falls in love with the irresistible town of Hope Cove, and with Mack, its equally irresistible sheriff. But when he receives devastating news about his sister's cause of death, Oliver doesn't know whether to stay and fight for love and a good life, or cut his losses and run.

What did you love best about Brokenhearted?

I love the romance between Oliver and Mack. It is really sweet and lovely. I also really enjoyed Hayden and what he brought to the story. Can't wait for his story.

I love the small town aspect of this story and the baking. The relationship lost with Oliver sister was also interesting in understanding Oliver and his reactions. The least interesting was GFY aspect of Mack.

He did a wonderful job. I had read this book before purchasing it on Audible. But when I listened to his sample, I had to have this. He really brought these characters to life. I really hope he does the sequels as well.

When Mack finds Oliver in the hospital and realizes how much he means to him.

I love law man romances with the small town aspect. Hope Cove is almost its own character in this story. It's a little unrealistic, but hey that is what I look for in fiction. Totally worth a credit.

4.5 stars minus one full star for unnecessary miscommunication = 3.5 Stars for story.

I will start by saying this - 5 Stars for John Orr's narration! His narration was absolutely fantastic.

Orr was an absolute pleasure to listen to.

This should have been a slam dunk 5 star story for me. I am a sucker for this trope where a young gay man with a tragic past comes to a small town and gains love and acceptance. The story flowed well and everything was going great until...but I'll get back to that.

So this story is about Oliver Parrish, a former foster kid who's had a pretty hard life without a lot of love or help. He's all alone in the world and his only dream and ambition is to be an Executive Chef one day. When he trudges home after yet another exhausting fourteen-hour day he finds Owen Macklin "Mack" on his stoop looking "emotionally broken" and asking for Oliver, Oliver reluctantly lets Mack come up to his apartment. Mack delivers the news that the sister Oliver never knew existed, Maggie, had died and left Oliver her bakery and apartment. He asks Oliver to return with Mack to Hope Cove, Maine in order to close out Maggie's things and get to know the sister he never got a chance to meet.

Just an aside - the emotion Orr brings to the scene where Mack tells Oliver about Maggie's death is heartbreaking. Maggie had been Mack's best friend since fourth grade, and the utter devastation that Orr weaves through Mack's voice...was breathtaking.

Once Oliver returns with Mack to Hope Cove he decides he isn't comfortable staying at Maggie's apartment, so Mack offers his guest room for the night until the B&B opens the following day. But the two men get along, and that one night turns into a few days...and the two find themselves falling in love. Their relationship grows and the sex is HOT!

The narration keeps the story flowing really well, everything was going great...and then. Then there is a BIG MISCOMMUNICATION detour.

Oliver gets some news and runs back to Seattle without telling Mack where or why he's going. It turns into a thing.

Honestly, I felt this entire section was completely unnecessary and served no good purpose. Thankfully it's not a long period of stupidity and the romance and story gets back on track. Personally, I thought Mack forgave Oliver waaaaay too quickly and should have made him grovel. Seriously grovel. And then beg some more.

I loved that I got to know Maggie a bit through her journals, I loved the town, and the sexy times between Mack and Oliver were smokin' hot! Sure, there were a couple of little niggles during the story, but I thought the absolutely sublime narration quelled them quickly.

The story is sweet, I absolutely loved John Orr's narration (and cannot praise it enough), the sexy times are scorching, and it's got a lovely HEA.

What a great start to this series.. I read this book first and thought it was ok but loving audiobooks I couldn't resist listening to it and made the story so much better I found I really enjoyed the two main characters a whole lot better as the narrator did a superb job identifying with them.. The story line was good even knowing there was going to be a HEA .. The only bad thing I had to say and this Is minutely small is I would have like to hear or read a bit more of Macks POV we only got a short snippet and I think it would have made the story 5 star for me.
All in all great easy read and listen with all three books in this series!!

Where does Brokenhearted rank among all the audiobooks you’ve listened to so far?

It does not rank at the top, but it definitely falls close. It was not the most engrossing story line, but it had enough plot line to keep you interested. It moved along nicely, with good build up to the end. Nice HEA, loved it.

What other book might you compare Brokenhearted to and why?

It reminds me a little of the Home series by Cardeno C, it just had that same sweetness to it.

Have you listened to any of John Orr’s other performances before? How does this one compare?

No, He is not amazing but he carried the story without too much difficulty. He had a way of pacing himself, that after a while became a little rhythmical, not always following the peak and fall of what was going on in the story.

Who was the most memorable character of Brokenhearted and why?

For me it has to be Hayden, he was a hoot and I also liked the little boy, very entertaining.

I was a bit bugged that I could hear the narrators breathing throughout the story. that being it was still a very enjoyable story and very well conveyed. I liked that there was distinction between every character and it was paced well

This story was so sweet and romantic. At first I was wondering how this story was going to go especially when they all found out how Maggie really died. I won't say how she died but it was sad in a sense. All in all Mack and Oliver made a great couple with their ups and downs. This story was a type of "gay for you " type of story. I bought all three books at the same time and I am glad I did. Now on to book 2.

This was such a wonderful story. Loved the narrator. Can't wait top continue the series

"My Heart Echo's Yours"

Mack and Oliver, the memories of Maggie, and the magic of the town of Hope Cove were all so endearing.

Fabulous contemporary mm romance audio. The narrator did an excellent job portraying each character and he really brought Mack and Oliver's story to life for me.

Not very deep. Narration was okay

3.5 stars.
This book wasn't very angsty or dramatic, I would say it was mundane. the Narrator certainly didn't add nor detract from it. It was just okay.

Oliver Parrish was making ends meet as a sous chef when Sheriff Owen Macklin aka Mack came to Seattle to tell him the sister he didn't know he even had was dead. Oliver was alone and knew nothing about his parents, so Mack was filling in the past for him. His sister who had been looking for him left him her bakery in Hope Cove, Maine. Overwhelmed about the news, Oliver decided to travel to Hope Cove to see if he would find some connection with the family he hadn't grown up with.

During this period of discovery, Oliver began falling in love with the town and the town's mayor but when he found out the real cause of his sister's death, Oliver decided to stop living in this fantasy and return to his life in Seattle. But Hope Cove and his sister's legacy was hard to leave behind, especially Sheriff Mack. Which place held his future, Seattle or Hope Cove and was he willing to fight for it?

I was a little disappointed because I was expecting something a little more angsty like Keeping Sweets. The story was just as sweet as Keeping Sweets and i love the writing. I may bump it up to a 4-star. I just needed more of an emotional pull and less of a predictable story

I'm not sure if the writing is juvenile or the narrator makes it that way, but it just seemed to be a book written for a "young adult" audience. The timeline seems rushed, and Oliver's character is supposedly deliberate (has one dream, and cannot see a different version of that dream when it's presented to him), he never leaps before he looks but then he seems to change in midstream. Also it includes my personal pet peeve, of the het romance trope "they are separated by fate/misunderstanding/etc. before getting back together for their hea"