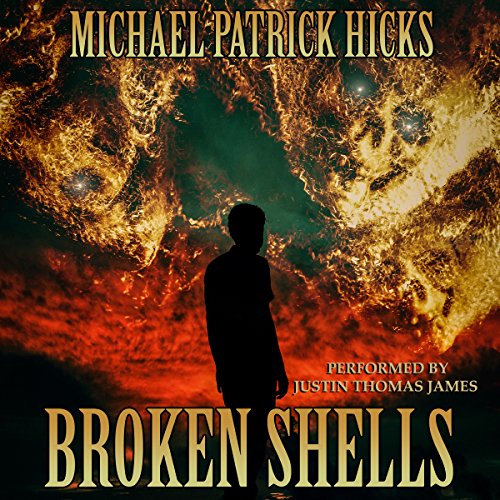 Antoine DeWitt is a man down on his luck. Broke and recently fired, he knows the winning Money Carlo ticket that has landed in his mailbox from a car dealership is nothing more than a scam. The promise of $5,000, though, is too tantalizing to ignore.

Jon Dangle is a keeper of secrets, many of which are buried deep beneath his dealership. He works hard to keep them hidden, but occasionally sacrifices are required, sacrifices who are penniless, desperate, and who will not be missed. Sacrifices exactly like DeWitt.

When Antoine steps foot on Dangle's car lot, it is with the hope of easy money. Instead, he finds himself trapped in a deep, dark hole, buried alive. If he is going to survive the nightmare ahead of him, if he has any chance of seeing his wife and child again, Antoine will have to do more than merely hope. He will have to fight his way back to the surface, and pray that Jon Dangle's secrets do not kill him first.

Relatively short, but a helluva listen!

This was my first book of Hicks' that I've experienced, and I am happy that I did so in an audio format. I'm amazed how much character development Hicks was able to squeeze into a story that is relatively short. The protagonist and the antagonist feel like fully fleshed-out people that you can empathize with. I contribute this both to the thoughtful details in the book and to the soulful performance provided by Justin Thomas James.

The swapping of the narrative between character perspectives and the story itself is reminiscent of some of my favorite King books The story has plenty of surprising moments, although a couple are arguably cliche, but the ride overall was enjoyable, always wondering what was coming up around the corner (sometimes literally!).

Justin Thomas James' portrayal of the characters completely brought the book to life. He not only expertly swaps between voices, but also retains the appropriate character moods and tones. He brings all of the emotional expressions to life, which is not always something that audio books delivers on.

Now the rough stuff: The audio book isn't seamless, but to be fair the ones that are have been few and far between! There is one moment in the audio production at a chapter break where it is apparent that the recordings were done separately (slightly different tone and sound quality). Although it jarred my immersion a bit, it was quickly forgotten as the narrator swiftly moved back into the cadence of the characters' personalities.

For a quick story with thoughtful, fully-expressed characters (written and performed) I would definitely say this one is worth a shot!

I was going to say this was a fun story, but that just doesn't sound quite right given that it's a horror story, so instead let me say it was an enjoyable story. Broken Shells is a rather brutal/graphic horror story and I enjoyed it right from the start. Antoine was a great character and felt like a real person. I really loved how Hicks used the hook of the junk mail flyer to draw Antoine into the craziness of the story. If I have any complaints it would be that I wanted more. I really wanted to know more about the creatures and their lore, as well as Jon Dangle and his family's role as caretakers.

Justin Thomas James does a fantastic job with the narration. He captured the character of Antoine perfectly and really did a great job of pulling me into the story.

I received a copy of this audio title for free in exchange for an unbiased review.

Broken Shells Kept Me Up Late

I already read this book but I had to listen to it when I found out it was coming out as an audiobook. Having already read it - I had a voice in my head that I associated with Antoine in my head and believe it or not - Hicks and Hempel at Bleeding Ear Audio were able to find someone who fit and exceeded it. Justin Thomas James is absolutely perfect for this narration and I found myself enjoying it more the second time around (even know what was going to happen).

I'll include my original review below because it is still exactly what I though reading this a second time with even more excitement and enjoyment.

When I started this book I tried to figure out why he named it broken shells. I had images of broken shells on a beach – I could not have been more wrong.

Hicks has a way of scaring the hell out of me. Seriously. I made the mistake of reading this over two nights — both at night. NOT the brightest idea. The second night, the night I finished it, I ended up being up another 20 minutes playing a game on my iPad to get the images out of my head.

I’m familiar with Hicks’ novellas and he’s able to tell stories that are amazing in 100 pages that most authors strive for in full-length novels. This one included. I felt for Antoine. His story, though short was incredibly well explained. I understood he was a down-on-his-luck kinda guy who was looking for just one thing to go right. I hoped for him. In 100 pages. I felt bad for a guy that is fictional. Just let that sink in.

I will not go into detail about the monster(s) in this story, just know that a lot of people will have a hard time with them. I want to say why (look away for a moment, creepy crawlies), but I don’t want to ruin the fun for anyone.

I’m finding that I like horror more and more and Hicks is one of the reasons for that. He’s able to write a story that makes my stomach turn but at the same time makes it so that I can’t stop reading. It’s like a literary car crash. You want to look away but you just can’t!

Overall, another novella from Hicks and another winner in my mind. If you’re familiar with his work or like well-written monster stories, Broken Shells if for you.

I requested a free copy of this audiobook - it has not affected my review in any way.

Woo, that was a doozy! It was exhilarating, disgusting and creepy!

Hicks really is good at describing horrific gore and I found myself cringe and shudder at the some of the scenes.
Antoine was a great character and I was really rooting for him till the end.

Justin Thomas James was great for the narration. I appreciated him using different voices for the characters and I loved hearing him swear 🤣

Definitely recommend this if you like the bugs from Starship Troopers and the horrors they displayed because Hicks does his bugs WAY better!

A new master of horror?

I received a free audio copy from the author, with no expectation of a review. All my thoughts are my own.

A down on his luck ex-con gets fired. On returning home, his wife informs they've won $5,000, but he has to go to some out of the way car sales lot to pick up the cheque. Not suspicious. At all. But Antoine can't afford to waste the chance, and treks out to get his winnings. Turns out it is a hoax, but the owner of the lot has far more nefarious plans for Antoine.

At just under three hours, this is a short story, but it sure packs a lot in. The narrator does a good job voicing the different characters, and making us root for Antoine throughout. But the thing that surprised (and pleased) me the most, was the niggling doubt about who was the real villain at the end of the story.

Michael Patrick Hicks can channel Lovecraft like no other. This story is great. Fast paced great tension. Can't wait to see if he explores more of this story or not. The ending is wonderful, and also keeps it open. If you're not familiar with Mr. Hicks you definitely need to correct that. He's an amazing author.

Antoine DeWitt’s day starts pretty poorly after he clocks a stupid redneck in the mouth and loses his job. Dude deserved it, anyway, but that ain’t gonna help pay the bills.

It’s looking pretty bleak for Antoine until he gets home and finds out that he may have won $5000 on a “Money Carlo” car dealership scratch off mailer. Must be too good to be true. As a matter of fact, that may be the biggest understatement of his life. The span of which is suddenly in danger of getting much shorter. Much, much shorter.

A very well written and entertaining tale of bugs and bad luck and all the things that you take for granted.

The story was really intriguing, but the performance stole the limelight! I have to find more stories read by the narrator!


It seems silly to have trigger warnings on a horror story. We’re all here because we relish the unexpected. However, I did want to give a warning for the racism in this story. If it were longer, I might have been able to forgive the amount of racist people in this story. But, with the story this short there are only so many people with talking roles, and of those talking roles I felt there was an unnecessarily high percentage of racism, both personal and institutionalized. Along side that I’d also would like to give a warning for police brutality. When I sit down with a horror book I prefer to keep real world horrors to the absolute minimum.

The idea for the story was solid, but I wish there had been more character development. That being said, if you are looking for a quick story with massive amounts of body horror, this is the story for you.

The narrator was amazing. I could just listen to his voice all day.

Not Taken With It

I feel bad but I really did not enjoy this book. If not for the narrator I would have given up on it had I read it myself. That being said the narrator did at times have some odd inflection in his voice when trying to convey certain emotions. He also sometimes seemed to have a southern draw to his speech and I wasn't certain if it was deliberate, or if I was just mishearing. It sometimes took me out of the story.

Speaking of the story, it just didn't grab me. I wasn't scared. I wasn't horrified. I felt backstory was mishandled. The protagonist backstory in particular in regards to his family life was confusing. Sometimes I felt sorry for his plight and then others times I was against him. Perhaps it just wasn't for me but I sadly did not like this book.

I will give the author another try sometime in the future, as he is a gifted author and I may try re-listening to this book to see if it was just a bad first impression. I will definitely seek more books by the narrator in the future.