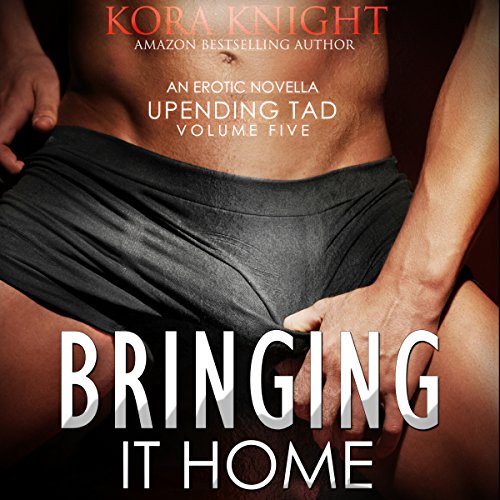 It's Friday night, and Tad finds himself doing pretty much what he'd expected. Celebrating with his friends at a night club in honor of their buddy Breck's birthday. The music's pumping and drinks are flowing, laughter and dancing bodies abound.

Nothing too outlandish, nothing unusual.

Until Scott and his own crew show up at the place. Funny how the one person Tad prefers above all others is the last person he wants to see. But now that he's spotted the guy across the room, he can't seem to take his eyes off him. Which winds up being a very bad thing. Seems Scott out in public with other attractive men is a much different story than Tad's used to.

As one disturbing event after another unfolds, Tad splits before he loses his mind. But the breather he needs he does not get. In fact, things just go from bad to worse, the night ending on a note he never would have imagined. As things between Scott and him hit rock bottom, the only direction left must be up. If only Tad's life would follow such a formula. But the path he's been walking lately has never been that simple.

With a world of revelations finally revealed, can Tad find it in himself to make peace with Scott's past so they can finally head into the future?

This is my favorite book out of all the series. It’s also the most emotionally loaded one. I love every minute of it.

It took a while but when Tad finally came around, boy was it all the feels!

Also, quite possibly the most intimate sex scene I’ve ever read.

Michael Pauley brought the book to life in so many awesome ways. Excellent narrator, as always. ⭐️⭐️⭐️⭐️⭐️

This book was such a roller coaster of emotions for me. Scott is just hurt so badly by Tad's denial of their love, or even the fact that they are in a relationship. He acts like Scott is his dirty little secret, and Scott is just so crushed. I was so angry at Tad for treating him this way. Luckily Tad realizes the error of his ways, and works hard to prove to Scott just how much he means to him.

Yet another great story in this series! Time just flies by when listening to these books and before I know it the book is over. I know theh are shorter stories but still. I somewhat expected to get bored with the series because so much steam can overshadow the storylines sometimes. Still though, I am sucked into this series like a dirty addiction.

Wow! First let me say that for this book to be a mm romance it was scorching hot. This review is for the whole series. There is a lot of sex but I was drawn in and listened to the whole series back to back. Tad is straight, or so he thinks. Tad soon finds out after losing a card game that he never stood a chance after Scot got his hands on him. There is some BDSM. Tad's having a hard time coming to grips with his feelings. The chemistry between the two are explosive. Can't wait to hear their friends story. Michael Pauley did an excellent job with narration.

This series gets better with each new book. I am sincerely addicted to Tad and Scott story.

In Bringing Home , we find that Tad is still insecure about taking the next step; come out and tell the world what are his feelings towards Scott. But , Scott is getting tired of waiting and being someone secret.

Kora Knight have skillfully crafted believable and interesting background and raison d' être for our heroes and secondary characters and in this book we see all of it coming together.

Michael Pauley was again blew me away with his perfect narration. I am in love with his voice.

Omg this is so hot!

I love this series. Thank you for making last past a single book. The story is unique and captivating

I loved how they ended up together after the fight they had about Tad coming out to his friends and family. Because Scott didn't think he was going to tell anyone that he had a boyfriend or that he was gay.

Tad finally realizes what he will lose if he lets Scott walk away. It's about time. I love these two. I wish that we could also hear this story from Scott's POV. I would love that! Michael Pauley's narration is the best!