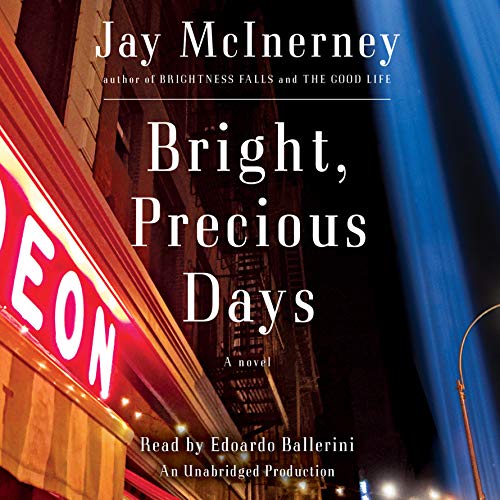 From the best-selling author of Bright Lights, Big City: a sexy, vibrant, cross-generational New York story - a literary and commercial triumph of the highest order.

Even decades after their arrival, Corrine and Russell Calloway still feel as if they’re living the dream that drew them to New York City in the first place: book parties or art openings one night and high-society events the next; jobs they care about (and in fact love); twin children whose birth was truly miraculous; a loft in TriBeCa and summers in the Hamptons. But all of this comes at a fiendish cost. Russell, an independent publisher, has superb cultural credentials yet minimal cash flow; as he navigates a business that requires, beyond astute literary judgment, constant financial improvisation, he encounters an audacious, potentially game-changing - or ruinous - opportunity. Meanwhile, instead of chasing personal gain in this incredibly wealthy city, Corrine devotes herself to helping feed its hungry poor, and she and her husband soon discover they’re being priced out of the newly fashionable neighborhood they’ve called home for most of their adult lives, with their son and daughter caught in the balance.

Then Corrine’s world is turned upside down when the man with whom she’d had an ill-fated affair in the wake of 9/11 suddenly reappears. As the novel unfolds across a period of stupendous change - including Obama’s historic election and the global economic collapse he inherited - the Calloways will find themselves and their marriage tested more severely than they ever could have imagined.

"McInerney is best at reflecting the lives of the beautiful people of Manhattan. [Narrator Edoardo] Ballerini matches the tone of these sketches with a sharply honed delivery." ( AudioFile)

It's worth the read but…

Being from the New York metropolitan area and about the same age as the main characters in the book I did enjoy certain aspects of it. The descriptions of various things significant to that era and descriptions of places that I know were all fun for me to read. The story has its good moments but in the end it was predictable. Well written , and I really like his style. This is the first of his books that I have read. It was definitely entertaining but a little bit fluffy.

For the fortunate few

For the fortunate few in very long marriages- for certainly fortunate plays a part- for those of us so accompanied in life this wondrous book will ring like autobiography. No, not in specifics, for how could it? But in tone and theme, in the events of a life together, here is sympatico.

And for those of you, younger, perhaps impetuous, impatient, here's a tale to help you stay the course as you sail into a land, into the far country, into a place peopled by couples only.

As to Mr. Ballerini, who I met following the travails of a young "problem solver" in colonial America- phrasing and tone in this book is precisely, exactly correct; I'd expect no less.

I swallowed this book whole, all the while reminded of countless friends in similarly long marriages, impatiently listing them as recipients of a lovely and timeless experience this book brings.

I would recommend this for the closely observed people, conversations and settings, as well as the spot-on narration. There are constant surprises as the story moves swiftly, alternating points of view and deftly picking up plot pieces from the past.

One of America's great literary voices

Thank you Jay McInerny for your meaningful prose which gets inside me and pushes me forward. I love being inside your world with characters that so reflect today's day to day moral dilemmas and what makes us human.

There's no real solution to the dilemma explored in this book (in McInerney's own words): "Whether true love can exist between husband and wife and whether lovers have any right to be jealous of spouses. A love both ellicit and spiritually elevating existed outside the legal sphere of marriage. Possession blunted desire -- while the unattainable lover shimmered like a brilliant star -- and festered in the heart like a shard of crystal."

The dialogue was pretentious and grandiose but interesting. My biggest issue is that the audio recording sounded like a breathy snob from Fresh Air. The reader probably did a great job of what was asked of him but the pretense of the presentation bordered on comedic. I don't think the book was intended to be as much of a comedy as the delivery suggests.

What disappointed you about Bright, Precious Days?

If James Patterson tried to write a Tom Wolfesque satire on the Great Gastby in the voice of Ayn Rand, you'd get Bright and Precious Days. This book sucks, but I continued to listen to it while swearing to give up on it, like a rubbernecker trying to see the gore of a train wreck while hoping at the same time that everyone is okay. People gave this book 5 stars for a reason that I haven't figured out yet.

What was most disappointing about Jay McInerney’s story?

I didn't care about any of the characters, except maybe Hilary who was savaged by Russel and Coriane for reasons that the author never fully described.

The narrator only had about four voices in his repertoire, two for the women and two for the men and his South African accent was atrocious.

Half the time I was cringing at the author's pretentious prose and the other half the time I was bored and waiting for a hook into the story. Instead of using words to create the sentences, he was creating sentences to use particular five dollar words that usually were unnecessary and pompous sounding.

I google the NY Times book review to see if anyone else thought the same way I did. Apparently, Mr. McInerney has quite a few good contacts in the publishing world because the Times review clearly thought this book was bad, he didn't care about the characters and thought the language was staid, yet he stopped short of calling it out by saying at the end that he is looking forward to the next installation of the series. Seriously??