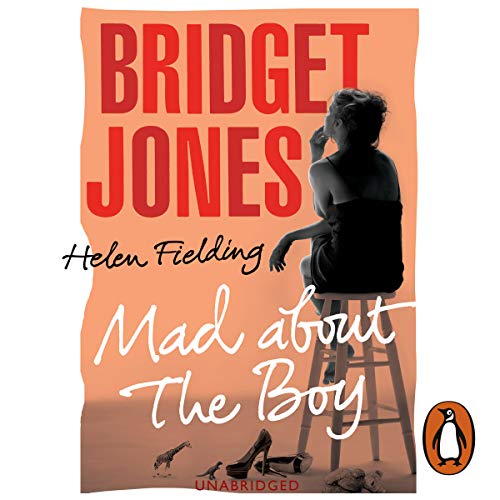 Bridget Jones: Mad About the Boy

Helen Fielding’s third Bridget Jones diary-novel, Mad About the Boy, follows Bridget Jones’s Diary and Bridget Jones: The Edge of Reason, both made into hit films starring Renee Zellweger, Colin Firth and Hugh Grant. When we meet Bridget once more, she is widowed – left well-provided for by Mark Darcy’s will – and approaching middle age. Narrated by Samantha Bond, this audiobook explores single parenthood, tweeting, texting, sex and relationships the second time around with all the warmth, humour and occasional hilarious awkwardness listeners have come to expect from the modern Everywoman who is Bridget Jones. Download Bridget Jones: Mad About the Boy from Audible.

When Helen Fielding first wrote Bridget Jones' Diary, charting the life of a 30-something singleton in London in the 1990s, she introduced audiences to one of the most beloved characters in modern literature. The book was published in 40 countries, sold more than 15 million copies worldwide, and spawned a best-selling sequel, Bridget Jones: The Edge of Reason.

The two books were turned into major blockbuster films starring Renée Zellweger, Hugh Grant, and Colin Firth. With her hotly anticipated third instalment, Bridget Jones: Mad About the Boy, Fielding introduces us to a whole new enticing phase of Bridget's life set in contemporary London, including the challenges of maintaining sex appeal as the years roll by and the nightmare of drunken texting, the skinny jean, the disastrous email CC, total lack of twitter followers, and TVs that need 90 buttons and three remotes to simply turn on.

An uproariously funny novel of modern life, Bridget Jones: Mad About the Boy is a triumphant return of our favourite Everywoman.

I was quite excited to listen to this story having loved the two Bridget Jones movies, but not having read the books.
I found the story fairly boring with many moments being taken up with boring reading of Twitter comments that made me want to fast forward.
The story is very similar to the first but without the freshness and surprise that the first story gave us. I generally felt that the author was attempting to make some easy money out of a stock type of story.
The reader was ok but not wonderful.

Where does Bridget Jones: Mad About the Boy rank among all the audiobooks you’ve listened to so far?

Easily one of my favorites. Samantha Bond was fantastic and handled the Bridget Jones we all know and love with perfect skill and did her every justice possible.

I bought this book not only because I'm a Bridget fan, but because I needed to laugh. And I was not disappointed.

The farting sports day...was laughing so much I had to pause the book.

I laughed and cried till my stomach hurt. I felt like my old friend was back for a visit and I didn't want her to leave

In my view, this book does not really compare to the preceding books around Brigdet Jones. I only listened to the first couple of characters and then gave up. I did not find the storyline or the narrative funny at all.

I really enjoyed listening: good written, good spoken, entertaining... It was just what I wanted!

Likeable characters, minor and major worries, laughter and sadness, disasters and triumphs. A warm and heartening episode in the further adventures of the delightful Bridget. Perfectly read.

I just LOVED the way Imogen Church read the preceding books. It's a shame they changed for another reader.

Great new book albeit a tad predictable in places. High 'feel good' levels. It totally hit the spot for me, I needed some light reading that would make me laugh. Mission more then accomplished!