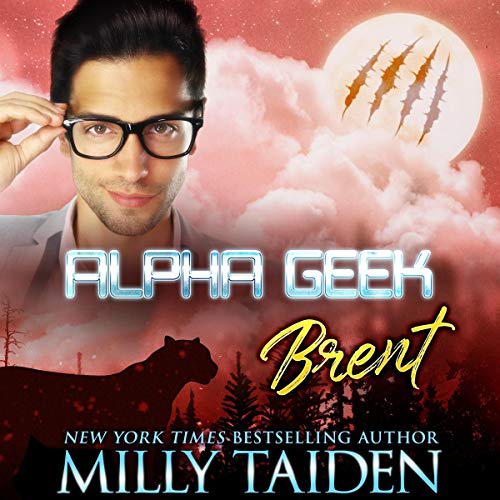 Wolf shifter Marie Lavine left her life in the military behind and is settling into her new role as bodyguard nicely. Though her past left her with PTSD, she’s excited to move forward and see what awaits at her new job. What she didn’t expect was to sniff out the scent of her mate. A cute nerdy human that made her wolf instantly hot.

Chemical Engineer and geeky human, Brent Williams has been on the run from his former employer. He’s wanted, preferably dead. While hiding out with a friend, he attends a party and meets the most beautiful woman in his life. He knows she’s out of his league since he’s geeky, wimpy, small, and more importantly...human.

But after a blind date gone wrong, Brent ends up nearly dying. Using a magic serum Zeke created, Marie saves his life. He’s now a massive alpha full of strength, muscles and the urge to destroy a bed or two claiming Marie. His mate. It’s all sex and romance until death comes calling. It’s time to fight for his life and for the only woman he wants.

Listeners note: Hang on to your panties, my geek lovers. This one's dirty, fun and action-packed. As with all my books, adults only, please. Enjoy, my freak-loving listeners.

Great story. I liked this one because it introduced another type of multi-animal shifter. Brent being a scientist have perfected the formula started by Zeke. Brent has been on the run from the government for five years and is hoping his friend, Zeke, can help him with his problem. Marie, ex-military turned body guard, comes along and he soon discovers that she's his mate. The two have a tumultuous romance with some rather destructive play times. This story also gives us a new point of view into the shifter because, unlike the previous stories where the new alpha was so sure and confident, Brent is rather clumsy, uncertain and shocked by his new abilities and transformation. Marie, Alexa and Zeke stick close by to teach him about his new reality. Then, all hell breaks loose and those who are now his closest allies must save him from his past. I really enjoyed this story and look forward to hearing the next.

This is an awesome series and this book is a great addition! I loved every second of this story and the characters in it. Brent and Marie were great together and their romance was a joy to listen to! The narrator did a fantastic job bringing this story to life and conveying the emotions these characters were feeling. This one was a bit darker than the earlier ones but it was so good! I am definitely excited for the next books in the series and want even more of this world and these characters. This story will definitely pull you in and you will never want to leave.

Love The Alpha Geek series and Brent is one of the best. Loved every word.

Lexi Evans did an AWESOME job narrating this story !! This is Brent and Marie's story . First hold onto your pants this one is hot !! Brent is on the run and goes to a party with his friend and meets on hot woman but knows he doesn't stand a chance since he is human and is just trying to stay alive . Marie is dealing with PTSD but just knows that she is better off out of the military . After a hot blind date that goes wrong she shoots him up with a serum that she knows will change him . While dealing with his new self Brent just wants to claim Marie as his own no matter what ! But when danger comes for him nothing will stand in his way to be able to live a life with his mate . This story is so well done that it will pull you in quickly and man is it a great read !! Well written and recommended to all !!

great seties! this one is a little darker than ratlier ones but still a great book....awesome true mate story and a fun listen