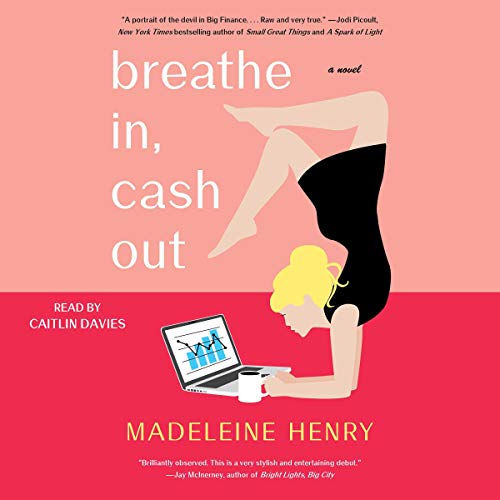 Breathe In, Cash Out

Breathe In, Cash Out

"The Devil Wears Prada meets Wall Street” (TheSkimm) in this sizzling debut about a banking analyst who plans to finally pursue her yoga career full-time after her bonus hits, but until then she’ll have to keep her sanity intact (and her chakras aligned).

Allegra Cobb’s resume: straight-A Princeton grad, second-year analyst at a top-tier bank, one-time American Yoga National Competition Champion. Allegra Cobb’s reality: spending 24 hours a day changing the colors on bar charts, overusing the word team, and daydreaming about quitting the minute her year-end bonus hits her account. She no longer has interest in the cutthroat banking world - she’s determined to launch her very own yoga practice. But her plan isn’t quite as perfect as the beachfront yoga pictures she double-taps on Instagram. On top of the 100 emails an hour and coworkers already suspicious of her escape plan, Allegra’s hard-driving single father has always fiercely valued high achievement above all else. That his daughter works on Wall Street means everything to him. But after a) unknowingly sleeping with the man now leading her banking cohort on one of their biggest deals to date and b) meeting the #blessed yoga guru who might just be her ticket to the life she’s always wanted, she realizes her happy-ever-after might be harder to manifest than she thought.

Fast-paced, laugh-out-loud funny, and totally irresistible, Breathe In, Cash Out “is a modern fairytale, a romance that’s not about finding the right guy, but finding yourself” (Eliza Kennedy, author of I Take You).

Exaggerated- yes, but realistic just the same. This thinly veiled fiction novel makes it hard to discern what is truth and what is fiction. The writer is gifted and makes you laugh.

disappointed, I picked because of Jodi Piccolt r

way too much F word, Maybe it would appeal to millennials but I found the main character Allegra naive

This book stressed me out. The storyline is ridiculous. I couldn’t bring myself to stop listening entirely, but I skipped ahead several chapters just to be done with it.