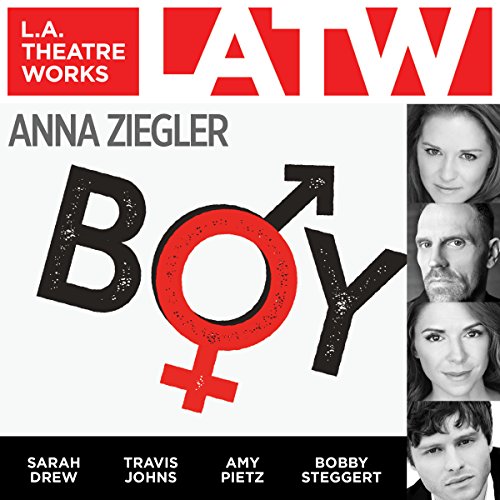 Anna Ziegler's Boy is a powerful statement about sexual identity and the mystery of what makes us who we are.

After a baby boy is seriously injured in an accident, a doctor persuades his parents to raise the child as a girl. As the child grows up, the child - known as Samantha and Adam at different times - faces an extraordinary challenge to carve out a place in the world.

Directed by Debbie Devine. Recorded in Los Angeles before a live audience at The James Bridges Theater, UCLA, in July of 2016. Boy is part of L.A. Theatre Works' Relativity Series featuring science-themed plays. Major funding for the Relativity Series is provided by the Alfred P. Sloan Foundation, to enhance public understanding of science and technology in the modern world.

this play will chnage your life

i can proudly say this this play is the best play ever written. this play is perfect. the more i listen to it the better it gets. i have listened to it around 30 times and every time i fall in love with it more. this cast is absolutely brilliant and i don't even miss that i cant see them. anna ziegler is a genius and this play has changed how i view he world and has made me a better person. please listen to this play it will change your life. the actual quality of this recording is wonderful and makes listening to this masterful work so enjoyable.

Who are we? Who are we supposed to be?

I am writing this the day after Danica Roem, a transgender woman, beat 13-term Virginia legislator and self-described &quot;chief homophobe&quot; Bob Marshall in an election that made history. Things are changing and love is love.

&quot;Boy&quot; is not about a transgender person, but about a child who is forced to deny the body he was born into. This wrenching, beautiful play, based on a true story, set in the 1960s through the early 80s, focuses on Samantha/Adam, a child (and twin!) born genetically male but raised as a girl because of a surgical accident to his penis, his family's anxieties, and, tragically, the confident and terribly wrong theories of a well-meaning doctor too in love with the child he wants to create to see the child before him. The play whips back and forth through time, and unlike a lot of plays turned audio experiences, those transitions are very clear.

This is in no small part due to the clear, pulsing writing and extraordinary performance of Bobby Steggert, who plays the &quot;Boy&quot; of the title both as a girl child who doesn't understand why she feels so bad and as a man who admits to being &quot;eight&quot; when he is 23 because of the years he lost.

And that's all I'm going to say. I had to turn this off a couple of times, I felt so overwhelmed with sorrow at what Adam had to go through, and awe that he got through it. I am glad I got to meet him.

not what i expected, but i remembered the media coverage of the boy raised a girl, turned boy again. despite our circumstances, "who we really are" had a way of showing up, for bad or good