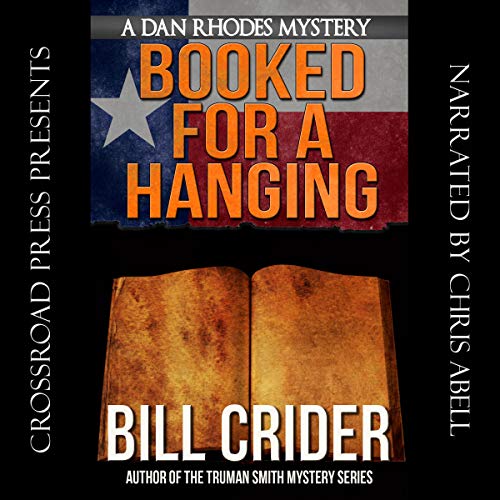 Booked for a Hanging

The versatile mystery novelist Bill Crider has created a pantheon of marvelous characters, but none is more real, warm, and thoroughly delightful than Sheriff Dan Rhodes of Blacklin County, Texas.

In his sixth adventure, Rhodes is confronted with what seems at first to be a suicide: the body of a man newly arrived in the county is found hanged in the dilapidated building he has taken over for his business. Simon Graham was a rare-book dealer. If it seems unlikely to find such an arcane entrepreneur in this extremely rural and sparsely populated part of Texas, it becomes less strange when it turns out that Graham was more con man than bibliophile.

The presumed suicide begins to look more and more like murder when several newcomers swoop down on the scene and try to beat out one another to find a reputedly valuable rare book that Graham was rumored to have among his collection of hardly worthwhile items.

Although Rhodes' two attenuated and eccentric jailhouse employees have gone overboard for the magic of the department's new computer, the steady, if put-upon, Rhodes and his clear-eyed observations of human nature have invariably been more useful to the solution of a crime - and that is still true in the case of the hanged book dealer.