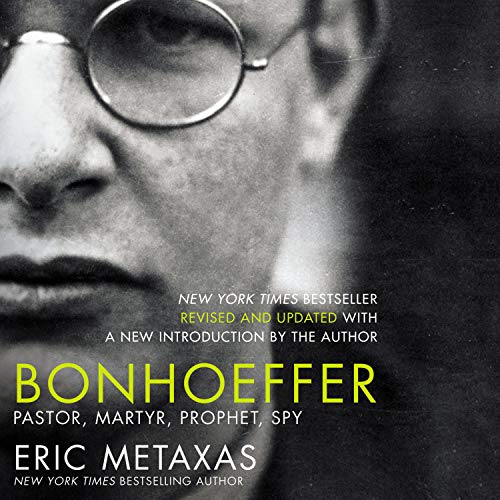 Who better to face the greatest evil of the 20th century than a humble man of faith?

As Adolf Hitler and the Nazis seduced a nation, bullied a continent, and attempted to exterminate the Jews of Europe, a small number of dissidents and saboteurs worked to dismantle the Third Reich from the inside. One of these was Dietrich Bonhoeffer - a pastor and author, known as much for such spiritual classics as The Cost of Discipleship and Life Together as for his 1945 execution in a concentration camp for his part in the plot to assassinate Adolf Hitler.

In the first major biography of Bonhoeffer in 40 years, New York Times best-selling author Eric Metaxas takes both strands of Bonhoeffer's life - the theologian and the spy - to tell a searing story of incredible moral courage in the face of monstrous evil. In a deeply moving narrative, Metaxas uses previously unavailable documents - including personal letters, detailed journal entries, and firsthand personal accounts - to reveal dimensions of Bonhoeffer's life and theology never before seen.

In Bonhoeffer: Pastor, Martyr, Prophet, Spy, Metaxas presents the fullest accounting of Bonhoeffer's heart-wrenching 1939 decision to leave the safe haven of America for Hitler's Germany, and using extended excerpts from love letters and coded messages written to and from Bonhoeffer's Cell 92, Metaxas tells for the first time the full story of Bonhoeffer's passionate and tragic romance.

Listeners will discover fresh insights and revelations about his life-changing months at the Abyssinian Baptist Church in Harlem and about his radical position on why Christians are obliged to stand up for the Jews. Metaxas also sheds new light on Bonhoeffer's reaction to Kristallnacht and his involvement in the famous Valkyrie plot and in "Operation 7", the effort to smuggle Jews into neutral Switzerland.

Bonhoeffer gives witness to one man's extraordinary faith and to the tortured fate of the nation he sought to deliver from the curse of Nazism. It brings the listener face to face with a man determined to do the will of God radically, courageously, and joyfully - even to the point of death. Bonhoeffer is the story of a life framed by a passion for truth and a commitment to justice on behalf of those who face implacable evil.

"Insightful and illuminating, this tome makes a powerful contribution to biography, history and theology." (Publishers Weekly)

This is hands down one of the best biographies ever written of a preacher. It is an encouragement to the believer and the historical accuracy woven throughout is a major plus for history buffs. In addition Mr. Metaxas does a phenomenal job in pointing out Bonhoeffer's dilemma with the church and the failings of church leadership to lay hold of the bible to and grasp the truths therein as their very lives depended on it. Honest in his approach to Bonhoeffer, the author doesn't exalt the man higher than he should be, nor does he approach him with disdain. In truth, I believe this book should not only be read, but studied by layman and preacher alike. So in my opinion, yes get this book!

Bonhoeffer is a fascinating and timely character not just in history but in the world of faith and Christianity. Metaxas has done an admirable job incorporating fascinating research and weaving into an engaging story. I’m disappointed however that the author has approached his subject with stars in his eyes, lacking any air of objectivity. The result is a flat book about a nearly two-dimensional infallible hero, making Bonhoeffer and his acts of courage and dogged curiosity difficult to appreciate and the man himself hard to relate to at all. Bonhoeffer and his work and the decisions he faced are more relevant for us than ever, perhaps, and it’s unfortunate this does not introduce to the breathing, living, and very human hero of God that Bonhoeffer surely was.

So relevant for today. One thing that stick with me that Bonhoeffer said was people trade tolerance for truth. How is that line today? How are the churches being complacent and not speaking out? Money and power corrupt. This is an eye witness account of how quickly a society can change and sheep complacent while it happens. Wake up. Listen to Bonhoeffer.

this book is absolutely Life changing.

don't rush. rewind, think, let it challenge you. you will be changed forever. i am forever grateful.

Very well written and performed. Inspiring. One of the best books in my 60 years. Recommend to anyone that wants to understand a well lived and thoughtful life a braver man. And family

As I hear of those who have lived, and died , for Christ, it convicts, inspires and brings what is important to the forefront. Especially during these times of uncertainty and turning against God in my country, this was great comfort to read. The narrator had a great command of German pronunciation. He read with passion, as if he lived right alongside Bonhoeffer at the time. I see it as 22 hours well spent in my life now, and for my future.

Academic promise declines into purple prose as the author's biases emerge, especially in discussing Nazis and modern critics of Bonhoeffer. Also, by the end of the book it feels padded with long, long passages of speeches, letters and essays rather than the illustrative narrative of the sections prior to WWII.

The narrator gets very hammy toward the end, also. In the early chapters, his slight change of tone helps to set off quotations from the author's words, but as Metaxas overloads the end with quotations, the narrator's affect when reading various Germans' and Brits' words is almost comical. I also found it curious that he was so exacting in pronouncing German names -- including "Bon-hoofur" -- but used the Anglicized "AY-dolf" for Hitler.

I hoped for a better understanding of this important figure, but wound up with a hagiography. Fully-formed figures, foibles and all, are always more inspirational to me than those too good to be true.

Amazing book about an amazing man

A must read, do not hesitate to spend time with this biography of Bonhoeffer. In its pages are hope, horror and a man so confident in God that his faith will cause your faith to grow with each page turned.

This is one of most moving books of our time, written with care, deep research, and heart. Eric Metaxas has captured this thoughtful, excellent life beyond a mere telling of his story. So much of his decisions of what to include give us a very personal, up-close experience with one who gave his life for his Lord. For instance, including the lively early childhood family discussions and the emphasis on sharing differing opinions, gives us insight into why Dietrich felt such alarm at a government that was silencing speech and freedoms. It wasn't in his training to hold back on sharing his considered opinions.

Dietrich Bonhoeffer celebrated life even when he chose to give up his earthly life for the resistance to evil. We would do well in our current chaos to remember what sacrifice and honor are all about.

I think Malcolm Hillgartner along with Metaxas, himself, deliver smooth, flawless narration, without the distracting mannerisms often present in an audio book.

My only catch was the number of prisoners in the final van ride, where the author said there were supposed to be 17 but only 16 were taken. Then when 3 were dropped off, the author said 14 remained. Did I miss that math class? :) Not a biggie, but I was paying attention.

Thanks to author and narrators for a wonderful experience.

I loved this book. The story is beautifully told and the authors did a deep and fabulous research of Bonhoeffer’s life. He was a remarkable man and his story deserved to be told. Thank you so much for writing this book.