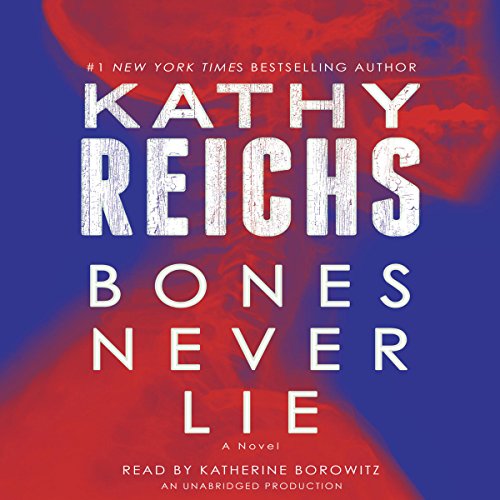 The evidence is irrefutable: In 16 New York Times best sellers over the course of as many years, Kathy Reichs has proven herself "a genius at building suspense" (New York Daily News). In forensic anthropologist Temperance Brennan, Reichs has created a detective fiction heroine who's brilliant to the bone. "Every minute in the morgue with Tempe is golden," says The New York Times Book Review. In the acclaimed author's thrilling new novel, Brennan is at the top of her game in a battle of wits against the most monstrous adversary she has ever encountered.

Unexpectedly called in to the Charlotte PD's Cold Case Unit, Dr. Temperance Brennan wonders why she's been asked to meet with a homicide cop who's a long way from his own jurisdiction. The shocking answer: Two child murders, separated by thousands of miles, have one thing in common - the killer. Years ago, Anique Pomerleau kidnapped and murdered a string of girls in Canada, then narrowly eluded capture. It was a devastating defeat for her pursuers, Brennan and police detective Andrew Ryan. Now, as if summoned from their nightmares, Pomerleau has resurfaced in the United States, linked to victims in Vermont and North Carolina. When another child is snatched, the reign of terror promises to continue - unless Brennan can rise to the challenge and make good on her second chance to stop a psychopath.

But Brennan will have to draw her bitter ex-partner out of exile, keep the local police and feds from one another's throats, and face more than just her own demons as she stalks the deadliest of predators into the darkest depths of madness.

This is book 17 in the Temperance Brennan Series

Another great book in the series. I like Katherine Borowitz performance of this book. The first-person-diary style of this book may not be for everyone but I like it.

The only bad about this book is that it is not listed as part of the Temperance Brennan series. Maybe it is because Kathy Reichs changed publishers.

Series like this must make a lot of money for Amazon and Audible, you would think they would make an easy way to subscribe to (or sign-up for alerts for) a series. I have spent over $200 on this series and over one thousand dollars on the other series I enjoy yet I need to log-in several times per month to manually check for new books.

If you are a fan of the Temperance Brennan series, I hope I am glad you managed to find this because it is definitely worth the listen.

The raw material was here for a great book. The psychology of the criminals and the crimes worked; there was a nasty cop who derided the efforts of Tempe, Ryan, and Skinny Slidell who gets his due in the end. So why did I end up giving it only three stars? 1) Way too much superfluous detail which did nothing to move the story forward. 2) The lack of astute police work; Tempe seemingly has developed a penchant for stream of consciousness hypothetical questions to which she expects answers. For instance a key piece of information as to how a dead woman's DNA was transferred to a victim's was painfully obvious to anyone actually listening to the audiobook. Tempe had in fact; seen exactly where it came from; yet three hours of the audiobook went by before she managed to regain her memory in the form of a Eureka moment. Then there was the her constant need to have everyone telling her anything to reiterate painfully obvious points that a ten year old should have been able to grasp; never mind an experienced anthropologist and Medical Examiner.
The Bones series has always been; in the words of Forrest Gump, a box of chocolates; you never know what you're gonna get. For me this one possessed the potential to be the best; too bad that it didn't.

Well, I am a big Kathy Reichs fan and especially of her Dr. Brennan books, but this one was not one that I couldn't wait to get back to. It had sooooooooo many names, I lost track and finally just glossed over when they started saying all these names, especially the French ones. It wasn't her best, but it was a Reichs book!

Less names...don't bring back a particular character, it added nothing and it could have been wrapped up about an hour before it ended.

Have you listened to any of Katherine Borowitz’s other performances before? How does this one compare?

Yes, because she has done most of the Kathy Reichs as written, if not all.

Did Bones Never Lie inspire you to do anything?

Let me put it this way...I fell asleep 5 different times when listening to this book, so it really didn't nor does it inspire to do anything except to hope for a better books next time.

If you are a Kathy Reichs fan, listen to this it's worthy, then you can draw your own conclusion. But, be warned there are a lot of names!!

Another awesome book by Kathy Reichs.

Where does Bones Never Lie rank among all the audiobooks you’ve listened to so far?

This book ranks among the best of my audiobook collection. There are several cliff hangers that I hope will be revealed in the next book in the series. I wonder if Kathy can write faster, it will be hard waiting for the next edition.

It's classic Temperence Brennan, only new!

The ending will throw you for a loop! This book ties together some loose ends from a long time ago, and sees Slidell, Ryan, and Brennan working together. Good plot, good set up, great ending. Really.

If you could sum up Bones Never Lie in three words, what would they be?

Another excellent book about Dr. Brenan. The story has the right amount of twist and turns to keep your interest but not make it so over the top to be unbelievable. You still really like the characters and the arc that she has built over the years with these books. I like how she reaches back into previous books and stories so well to build this story.

I like how well I like this Temperance Brenan over the TV version. This one is still brilliant, but not arrogant and unfeeling.

What does Katherine Borowitz bring to the story that you wouldn’t experience if you just read the book?

Excellent narrator who reading brings real emotion and feeling to the book.

Knew who did half way through

Literally at the half way mark I knew who had done it. I can't imagine any reader of mystery and thrillers wouldn't. What surprised me was that it didn't even dawn on Brennan or Ryan. I don't retain the exact contents of every book I read but I am pretty sure that in at least one of the Reichs' books there is Behavioral Analysis type psychology. So when heard the news (no spoiler) it should have switched a bunch of light bulbs off in both their heads.

All that aside, the writing and the rest of story, the wording etc are worth finishing the book.

I really liked the absence of Harry and Katy and the wonderful addition of Brennan's mother.

OH and the narration was marvelous.

I love Kathy Reichs Bones books, I’ve read all of them and I also love the Bones tv series. I have literally 2 issues; the first is how the progress Brennen and Slidell make goes back to almost a negative step one with each new book. By now they’ve gone through so much they have to have a respect and friendship formed. Why do we always have to be reintroduced to Slidell as this annoying and irritating person? The second and bigger issue is Brennens relationship with Ryan. Her constant misinterpretation or misunderstanding of his behavior is exhausting. She’s supposed to be a strong and extremely intelligent woman yet she behaves like a dramatic teenage girl constantly. It’s such stupid-typical-girl-melodrama and so unnecessary. Brennen being strong enough to accept and engage in a real relationship with Ryan only enhances her character and strength. I literally want to fast forward through her interactions with Ryan because it makes her sound so pathetic and weak. Really wish this part of her character could be corrected. The detail and information discussed in the stories I LOVE.

I much prefer Linda Edmond as the narrator. Good story, glad to see a mature progression for Tempi and Ryan

It’s typical Temperance Brennan. I enjoy Kathy Reichs writing no matter how predictable her Tempe character is, but this was not one of my favorites.