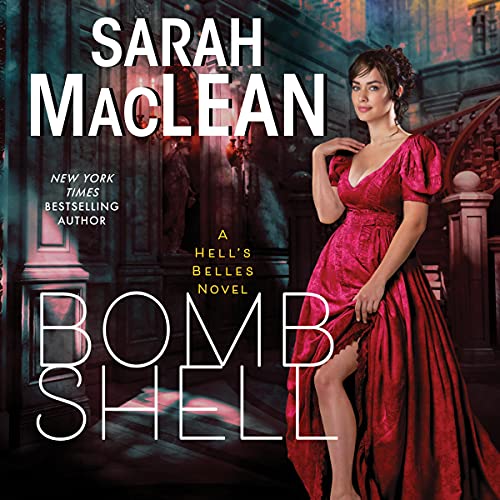 New York Times best-selling author Sarah MacLean returns with a blazingly sexy, unapologetically feminist new series, Hell’s Belles, beginning with a bold, bombshell of a heroine, able to dispose of a scoundrel - or seduce one - in a single night.

After years of living as London’s brightest scandal, Lady Sesily Talbot has embraced the reputation and the freedom that comes with the title. No one looks twice when she lures a gentleman into the dark gardens beyond a Mayfair ballroom...and no one realizes those trysts are not what they seem.

Except someone has to keep Sesily from tumbling into trouble during her dangerous late-night escapades, and maybe close proximity is exactly what Caleb needs to get this infuriating, outrageous woman out of his system. But now Caleb is the one in trouble, because he’s fast realizing that Sesily isn’t for forgetting...she’s forever. And forever isn’t something he can risk.

I’d give the performance 6 stars if I could!

Another reviewer (here or elsewhere) said that this book was like an all-female Avengers set in 19th century London, and I think it’s an apt description. High energy, funny, lots of action, lots of characters to like (and plenty to hate)… loads of fun.

Sesily/Sexily may be my favorite MacClean heroine of all time, and this is a scorcher of a love story. Like other MacLean novels, this book is devastatingly smart and wonderfully feminist. I won’t say too much more about the story, but I’ll note that Caleb is super sexy and likable.

A few words about the narration, which is wildly, vastly superior to the other recent MacLean narrators, Rosalyn Landor and Justine Eyre. Landor sounds old and constipated, and her male voices sound stuffy and not the teensiest but sexy. Eyre is ridiculously breathy, bad with certain (but not all) accents (Scottish is the worst for her), and, worse than all that, she’s not a smart reader. What I mean is that the number of times in a given book she reads a sentence wrong/emphasizes the wrong word/messes up tone is noteworthy. It happens a ton, and it always yanks me out of the narration.

But back to this book! Mary Jane Wells is a delight. Sexy male and female voices, great with accents, fun when she needs to be, with a tone that is always clever and somehow conspiratorial… she makes me feel as though I am in on the action and part of the secret! She’s just wonderful. Wells also differentiates her many female characters’ voices, which Eyre is terrible at.

I love this book, but I also now love Mary Jane Wells, and will be seeking out other titles that she narrates.

Sarah MacLean is one of my favorite authors. This new series brings back one of the Soiled S’s, the Talbot sisters. Sesily and her friends, Hell’s Belles, are quite the heroines and I look forward to reading their stories. This one, with Sesily and Caleb, is a great start to the series.

Not my favorite by the author. The heroine was too silly for my taste. The hero lost his luster as the book progressed.

The Narrator's voice switches pitch, tone and speed so frequently it is difficult to listen to the story. I couldn't finish it.

I would listen to Mary Jane Wells read anything as she is amazing . MJW has got me through many an average listen. So to listen to her narrate a book that is beautifully written and so engaging is sheer joy. This story made me laugh out loud. It is captivating and developed well. It is not only a romance, it’s about friendship, strength, being true to yourself. For anyone who likes this genre it is a pleasure. There are some erotic scenes but they are not overdone and don’t dominate. The only tiny criticism I could make was the hero’s thoughts were a little repetitive. Overall I would highly recommend this story, especially to any strong willed woman. Though I have listened to many historical romances Sarah MacLean was new to me. I’m delighted to have hopefully found a new stock of intelligent romances, from a fascinating time , written expertly.

The books we've been waiting for

Sarah Maclean has done it again. Enthralled from the first page, Sesily and Caleb's book has been years in the making, and we'll worth the wait.

Love Mary Jane Wells and her style of narration. Sarah MacLean always delivers refreshing stories with a twist at the end that surprises and satisfies. Can't wait for the rest of the series!

way too hard to understand the accents...

between the thick accent and the fast speaking it was really hard to understand. it's possible it was an interesting book but I honestly couldn't tell what was happening.

Very enjoyable story. I love Sarah Maclean and MJW. Terrific combo. The story of a group of women taking a stance for right...if you will...is a wonderful idea. I have loved Sesily since the first novels and have longed for her story. I knew there also had to be more to Caleb's background than we knew. I recommend.

This is a fun fast moving story. Loved the two primary characters. The narration is excellent