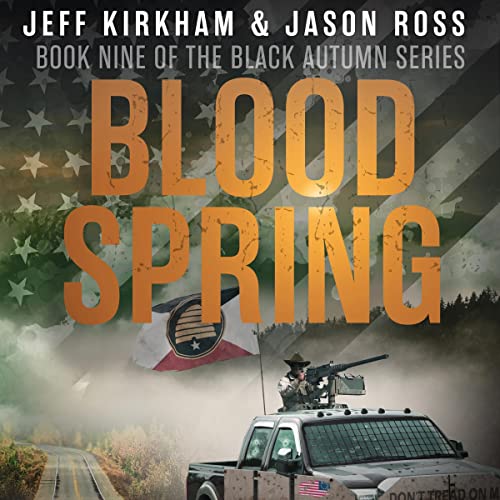 Special Forces veteran Jeff Kirkham and survivalist Jason Ross hurdle toward their final confrontation after Kirkham seizes control of the Homestead and stands between Ross, his wife and his land. But the two men's personal vendetta may cost them everything as the Mexican cartel bears down in an armored thrust to subjugate the Rocky Mountain West.

Only Jenna Ross, estranged wife of Jason Ross, sees the full measure of all that is at stake, and she struggles between dark treason and the iron anvil of tyranny. There is no manipulation she will not consider nor personal value she will not compromise to save her friends and children. Will it be enough to bridge the hatred between her two scarred champions?

Blood Spring is book nine and the final installment in the Black Autumn series and brings the full saga to completion.

Make sure you read all 9 books.It really is an interesting series.
Good character build and development

this was a great series. the characters were very real and imperfect. I enjoyed listening to the books very much. Kevin Pierce did a great job with the narrative.

Great end to the series

one of the best series I've ever experienced

this is easily one of the best series I've ever listened to / read.

Coming to a sad end!

I have been following this series from the beginning! One of the best post apocalyptic series. I can't wait for the new up coming series! I also love the narrator one of the best! He kept me enticed with his dramatic reading! Keep them coming Jeff and Jason!

Great writing. GREAT performance by Kevin Pierce
Thanks for all of the great hours of listening

It's a great book series

I have loved these books since the first one, it's a great series. I can't wait for following books!

fabulous conclusion to a wonder series

Jeff and Jason conclude their wonderful series with a bang. I just downloaded book1 to listen to it again. I'm looking forward to thier next entertaining series.

After reading the reviews I thought for sure I’d be let down, not at all. Not exactly how I thought it would work out, but I wasn’t disappointed. Looking forward to y’alls future endeavors! 🇺🇸

A solid conclusion to an amazing series. Does surprisingly well at depicting the effects of the fog of war; both among enemies and friends alike.