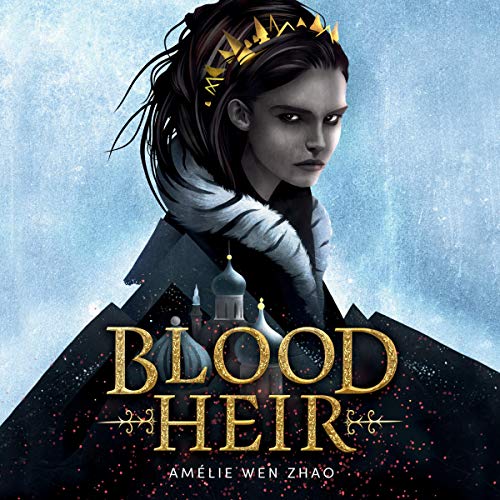 The first book in an epic new series about a princess hiding a dark secret and the con man she must trust to clear her name for her father's murder.

In the Cyrilian Empire, Affinites are reviled. Their varied gifts to control the world around them are unnatural - dangerous. And Anastacya Mikhailov, the crown princess, has a terrifying secret. Her deadly Affinity to blood is her curse and the reason she has lived her life hidden behind palace walls.

When Ana's father, the emperor, is murdered, her world is shattered. Framed as his killer, Ana must flee the palace to save her life. And to clear her name, she must find her father's murderer on her own. But the Cyrilia beyond the palace walls is far different from the one she thought she knew. Corruption rules the land, and a greater conspiracy is at work - one that threatens the very balance of her world. And there is only one person corrupt enough to help Ana get to its core: Ramson Quicktongue.

A cunning crime lord of the Cyrilian underworld, Ramson has sinister plans - though he might have met his match in Ana. Because in this story, the princess might be the most dangerous player of all.

"Cinematic storytelling at its best." (Adrienne Young, New York Times best-selling author of Sky in the Deep and The Girl the Sea Gave Back)

"Zhao shines in the fast-paced and vivid combat scenes, which lend a cinematic quality that pulls readers in." (The New York Times Book Review)

"Blood Heir is cinematic storytelling at its best. A stunning new voice in YA, Amélie Wen Zhao has drawn characters who are as complex and captivating as the fantastical world she’s built. Get ready for a retelling like you’ve never seen before." (Adrienne Young, New York Times best-selling author of Sky in the Deep and The Girl the Sea Gave Back)

"Sure to keep readers turning pages.... Perfect for fans of Amy Tintera or Sarah J. Maas, but readers should prepare for plenty of heartbreak." (Booklist)

"[A] pointed exploration into the consequences of exploitation and the defining nature of choices." (Publishers Weekly)

The good: great world building, interesting magic system, tension & action galore, a new take on Anastasia
The meh: lots of cliched phrases bandied about as if they were new, several stock characters, lukewarm romance, but they were aptly used so <shrug>
The bad: so so many flashbacks, relentless tragedy and darkness with very few breaks took away from the impact of scenes that should have been forceful, lots of repetition of phrases/characters/scenes/action, unsatisfying ending (I guess this is book 1 but idk if I'll continue)
The reader: she had a great range of voices, but she was so QUIET. I had to put my volume on max to hear her. It was like she whispered the whole book. She also had a strange staccato cadence in her narration that took time to get used to.

Overall, it was okay. I was invested enough to hear the whole story, but I doubt I'll continue.

By the end, I was in trepidation

I first heard of this novel because of the YA Twitter assault on the author and the book for supposedly insensitive references to African Americans and slavery in America. When I heard that the novel would be coming out despite the hate campaign, I decided to check it out.

First off, in case you're still wondering, there's no references to African Americans or slavery in America. This book focuses more on forced contracts and human trafficking in Asia, which is a very relevant problem today. And I feel it gives the subject both a thorough and a sensitive exploration.

Second, this is a decent novel. It started off a bit slow for me and some of the subject material isn't exactly original (Affinites are basically Marvel mutants, but have existed since the dawn of mankind and have very specific ability categories), the story and characters do draw you in and make you want to keep reading or listening. By the end, I was in trepidation as to how the climax would resolve itself. And now that I've finished it, I have just one question: when's the sequel due out? I wanna know what happens!

yall. I cant take the narrator of this story. She whisper-talks the entire time and its like she is keeping a secret.

also, the story is not worth the time because the ending gives no real conclusion.

I tried to finish but just couldn't. The main protagonist just sucks. way to much inner monalog and not enough story.

Premise is interesting, magic is interesting - kinda like Avatar the Last Airbender. But seriously over dramatic. And it seemed to be trying to create the really dramatic and intense reactions between characters when it hasn't put in the work to make us understand why they'd care so much for each other. So the intensity of the moments were always jarring.

I usually love Emily Woo Zeller as a narrator, but I think due to the melodramatic writing in the book, she performed appropriately to the material and it was just too much for me (like the whisper screaming at the top of her lungs at the loss of her friend).

This could be a fine listen for younger audiences but does not hold up past the mid teen-years in my opinion.

Its good not great

The concept and world the book is set in is very interesting and well thought out but the writer takes too much time on unimportant details and has flash backs in almost every scene that make it hard to immerse yourself. It was hard to get through the first half of the book. It’s obvious a set up for more book but don’t know if I’ll be reading them. Great idea but the writing style was not for me.

Rooting For Anastasia All The Way!

I found myself holding my breath at moments throughout this novel. Just when I thought I knew who the antagonist was, the story would shift in ways I did not see coming. I truly hope this is the first of many novels in a series and will definitely be pre-ordering as soon as it's available. I absolutely loved the story line, world building, and found connections to many of it's characters. Great job!

I loved this audible. It was the best I’ve ever heard, Emily Zeller was amazing when it came to switching between the characters and using different tones for the voices. Zeller’s voice really helped bring the story and to life, making it more detailed and lifelike. I extremely hope she will be able to do the rest of the trilogy!

Loved this!! I was blown away by how fantastic this was. Completely original and completely engrossing!! The characters were complicated with scars from their past and how they were treated. I cried a few times and got so stressed at others, but then I swooned many times!!!

Emily Woo Zeller has a great voice for this story. She nee to me, but I was very impressed!!

exactly what I love

it's been hard to find new books that match up to my favorites. this story had everything that I crave in stories. magic, battles, enemies turned lovers. I also love Emily Woo Zellar's narrations, so I highly enjoyed this book.