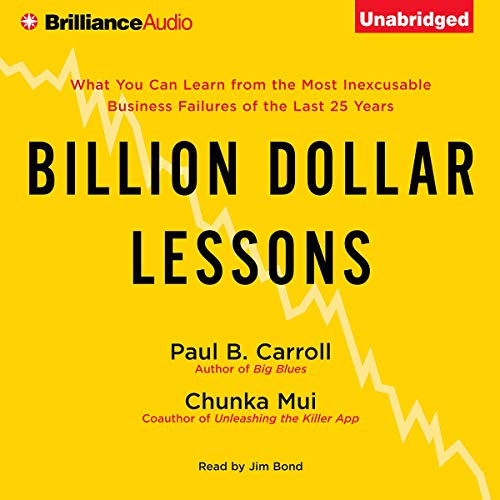 In the 1960s, IBM CEO Tom Watson called an executive into his office after his venture lost $10 million. The man assumed he was being fired. Watson told him, "Fired? Hell, I spent $10 million educating you. I just want to be sure you learned the right lessons."

In Billion Dollar Lessons, Paul Carroll and Chunka Mui draw on research into more than 750 business failures to reveal the misguided tactics that mire companies over and over. There are thousands of books about successful companies, but virtually none about the lessons to be learned from those that crash and burn.

This is surely one of the memorable books I have read. The analysis goes into different levels and tracks real lessons from these misfortunes. Although I would argue that some of the assumptions for losses were too simplified, I find it interesting and logical reasons that surely assist in the fall of these companies.

A great read for the business minded and not to miss.

Predictions are Hard - Especially about the Future

Think "Predictions are Hard - Especially about the Future" is is a Yogi Berra quote? Actually, it's first (but disputably) attributed to Nobel-prize winning physicist Niels Bohr (1885 - 1965) used by authors Paul B. Carroll, Paul Carroll and Chunka Mui in their 2009 business and economics book, "Billion-Dollar Lessons: What You Can Learn from the Most Inexcusable Business Failures of the Last 25 Years."

"Billion-Dollar Lessons" is a compendium of MBA-level case studies of abject, huge failures - like Kodak"s failure to recognize digital technology and cameras would make its products and services as obsolete as the Pony Express. Rather than adapt to a new reality, Kodak convinced itself that the threat wasn't real - and its shareholders suffered. This book discusses the individual psychological factors and group think that caused Kodak, collectively, to let itself be pushed off the proverbial cliff.

This book relies heavily on quotes from Berkshire-Hathaway's Warren Buffet. The quotes are anecdotally on point, but could have taken it much further. For example, in Part I, the authors discuss how the benefits and cost savings of synergy, or adjacent acquisition, only work about 1/3 of the time. (Translation for the NOT prematurely grey: When I was in undergraduate B-school in the 1980's, the terms were. 'vertical integration' or 'horizontal integration', and the success rate was about the same). Berkshire- Hathaway's holdings run independently of each other, and Carroll and Mui don't contrast Buffet's success with the many failures the authors found late in the 20th century and at the beginning of the 21st. Sure, Helzberg Diamonds might be romantic - but they aren't selling See's Candy.

A more apt Bohr quote, given the topic, is "An expert is a person who has found out by his own painful experience all the mistakes that one can make in a very narrow field."
As quoted by Edward Teller, in Dr. Edward Teller's Magnificent Obsession by Robert Coughlan, in LIFE magazine (6 September 1954), p. 62.

The narration - well, as much as I am fascinated by the topic, and as well organized as the book is - was a sure fire way to put me to sleep in 15 minutes or less. I know, because I use the Audible timer, and invariably had to rewind to where I drifted off.

The book is extremely informative. What I liked about it the most was that it was more about failures than successes.

Great stories, I’m sure there will be a follow-up
Including Sears, Pier 1, Montgomery Ward and a dozen more. Great read.