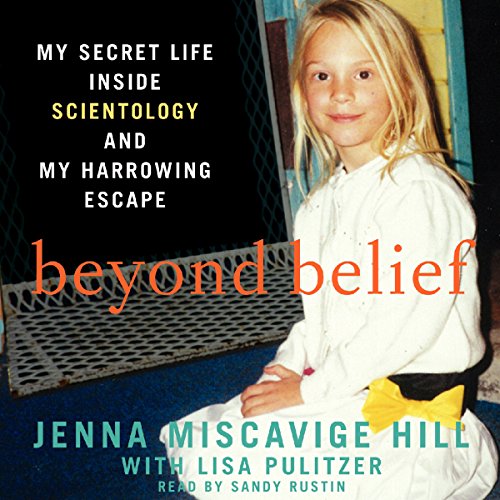 Jenna Miscavige Hill, niece of Church of Scientology leader David Miscavige, was raised as a Scientologist but left the controversial religion in 2005. In Beyond Belief, she shares her true story of life inside the upper ranks of the sect, details her experiences as a member Sea Org - the church's highest ministry - speaks of her "disconnection" from family outside of the organization, and tells the story of her ultimate escape.

In this tell-all memoir, complete with family photographs from her time in the Church, Jenna Miscavige Hill, a prominent critic of Scientology who now helps others leave the organization, offers an insider's profile of the beliefs, rituals, and secrets of the religion that has captured the fascination of millions, including some of Hollywood's brightest stars such as Tom Cruise and John Travolta.

The Despicable Truth Behind Scientology

We are all familiar with Scientology in general terms as a weird, sinister quasi religion/cult. However the depressing and shocking detail offered by this book brings home the reality of the horror to a new level. What makes the story even stranger is that the author is the niece of the current leader of the "church" and a distant relative of the Sci Fi scam artist L Ron Hubbard who created this fake “religion.”

Her story starts at a very young age with her account of life in the concentration camp like setting of a Church communal compound in California. I have read stories of the lives or orphans raised by Priests in Ireland and if you thought that kind of abuse was a thing of the past this story will set you straight. The author becomes a member of the Sea Org the quasi priesthood of the organization. Even though she is effectively a member of the Scientology elite inner sanctum the persecution, abuse and maltreatment continues well into her adult years....indeed until she flees the "Church."

Her accounts are quite as disturbing as anything you may have read about the excesses of communism, fascism or Cambodia under Pol Pot. The methods of though control and exploitation are straight out of the 1984 playbook. The fact that this kind of abuse and insanity is alive and well and happening right now in a town about an hour from where I live is doubly horrifying.

The author is obviously inexperienced and stylistically it’s a little clumsy somewhat in the vein of Anne Frank’s diary, but that doesn't get in the way of the reality she describes. This is disturbing, sad and compelling reading about a corrupt, abusive organization which currently enjoys tax exemption as a religion from the IRS.

I was hesitant to read this book because Scientology really messed up someone close to me. I didn't want to ready anything about this dangerous organization, but my instincts said to do it, and I'm glad I did!

I wanted to put this book down a few times because what happened to Ms. Hill, and others in the story, was beyond absurd and disturbing. It pissed me off because I knew I couldn't do anything about it. But then I couldn't put the book down because I wanted to witness her evolution and what it would take for her to break free.

The intelligence, courage and strength Ms. Hill showed in the end was incredibly inspiring. I am certain this book will help many who have experienced pain, suffering and damage from Scientology. Hopefully it will educate others so that they don't find themselves prey to this organizations and others like it.

This Was an Eye-Opener

I've heard people talk about Scientology. I remember seeing ads on television for "Dianetics by L Ron Hubbard." I never knew quite what it was, but they sure did advertise a lot. (As I recall the book moved toward the screen bursting from flames.)

Based on the name and the fact that L Ron Hubbard was a science fiction writer. I assumed that the people involved would be techie types, smart and educated, into cutting edge technology. Wow! Was I wrong!

The author tells her story, and what a story it is. She is a third-generation Scientologist. I had no idea it had been around that long. She basically grew up alone since she was separated from her parents at an early age. Making this even more interesting is the fact that her parents were high-ranking people in the organization, and her uncle became the head of it when LRH died. With those credentials, you would think she would have lived the good life. No so.

Describing day-to-day operations, I got the impression of people being almost automatons. They were constantly being watched by each other. Every imperfection and indiscretion was reported. It also made me curious so I Googled "Scientology uniforms" so see what they wore. This just enhanced the vision of brainwashed uniformed minions like those in a bad science fiction movie.

While the actual people who do the work are treated poorly, the celebrity members are treated very well. My daughter commented that she read some celebrities stay because the organization has a lot of personal info on them that was gathered during their auditing sessions.

I think the thing that struck me the most was the lack of education. The current head, David Miscavige, dropped out of school at age 16. The author's parents were also drop-outs. Most startling was at one point, the author had an opportunity to leave, and the reason she stayed was because she knew that she would not be able to fit into public school with her lack of education. Her only knowledge was the teachings of LRH.

This was a very interesting inside look at a non-mainstream religion that I knew almost nothing about.

Ripped away from family that was brainwashed into thinking that the scientology "ranch" was like a boarding school rather than the worst orphanages portrayed in "Jane Eyre".
Almost 20 years of scientology brainwashing, taught to be afraid of anyone outside of the cult to insure seperation, forbidden to use internet, watch tv or movies, sounds more like a North Korean dictatorship than existing in California & Florida less than 10 years ago. It almost broke Jenna Hill but she is stronger than all that and is now helping others who escaped.

I had no idea!

This is an excellent book! It doesn't exactly weave a tale like some biographies might, and the way fiction books do, but I was totally sucked in and wanted to keep listening... Perhaps it is because it was written by Jenna Miscavige herself and it's true.

I imagine few of us would have a solid understanding of Scientology, but the truth is almost unbelievable.

We've all met someone to whom the label "control freak" applies, but thank God that most of us have never come into contact with someone who's control freakishness extends to the writing of reams of rules to cover every waking moment of a person's life from the cradle to the grave, not to mention the perversity of a mind twisted from birth by those same mind-numbing, soul-sapping trivialities that then becomes one of the wardens or trustees, replacing those who move on up to the higher echelons of privilege.

Tellingly, I've never heard of one of these types of hellish utopias that doesnt enrich the few at the top with the spoils of backbreaking labor by those at the bottom. The riches derived in this manner are truly obscene, extending to the creation of world-wide properties and monies. It's "beyond belief" the types of social systems that can be constructed and maintained by self-isolating groups in these USA. I've thus far avoided reading about those Warren-Jeffs types of polygamous groups, but after hearing what was dreamed up and put into practice by "LRH" and his minions, I assume those polygamists can't be much worse, so I plan to audioread about them next.

Perverse. Abusive. Nightmarish. These are the words that come to mind while listening to this brave woman's tale of self-discovery in captivity and the strength of spirit with which she freed herself and her loved ones.

This book opened my eyes to the very sick and deranged world of Scientology. I have always been curious about this book and I appreciated the perspective from someone who grew up knowing nothing else. The obvious abuses that she went through, as well as others, and the isolation is disturbing. I don't actually know how celebrities can subscribe to this theology, unless the religion that they are receiving is much different than those in the Sea Org. I wouldn't doubt it since much of the money the church seeks is from large donors such as celebrities. It is truly shocking that people can get so brainwashed and watch their families split apart and allow it to happen! It's truly crazy making.

I really liked this book and think it shines a bright light on a very dark religion.

Sad that Scientology is allowed to abuse children.

This book is the story of a child born into Scientology. She had no freedom to even
think for herself. I am so glad she got out alive.
David Miscavige's wife has been missing for years and no one is looking for her.
Why?
Scientology is classified at or near the top of harmful cults. They take all your money, Noting is free with them. They charge for the "help", which is really brainwashing.
If you have no money they put you in the sea org. to work as a slave.
People who speak out against them are in danger of being sued and followed for
years. They have a history of being a mind control cult. They force secrets out of you to use as blackmail if you try to escape.
Please also read. "A Peace of Blue Sky." by Atack. I is not an audio book yet but I hope audible will consider it. A Peace of Blue Sky is available at amazon as a kindle e-book.

The abuse from this "religion" started from the beginning with Ron L. Hubbard.
Some think is is only the current leadership.
It is much deeper than that.

By the way. I am not a Scientologist and have never visited any of their "churches"
I am just a mom, nurse and concerned citizen who is trying to educate myself
about abuses going on in our country.
We should demand the Scientology be held accountable for the evil it is brought on
innocent people.

Must read for anyone with kids.

As a student in Boston during the late 80's.I was constantly approached on the street by these scientologists and once entered their "church". on Newbury street. They have expensive real estate which psycologically gives themselves credibility to the young people they target. And they do aggresively target them. Every year hundreds of thousands of new minds enter the city and they are waiting. This book is a highly detailed account into the inner workings of this cult. It gives great insight into mind control and manipulation. While most of us will never be threatend or affected by such an extreme organization one can learn from the writers experience on how to avoid being manipulated or controlled by any organazation. The narrator captured the authors transition from mind robbed child to angry adult, flawlessly.

Revealing about all religious cults

Would you listen to Beyond Belief again? Why?

Yes. It is a fascinating look at how people can be manipulated and abused in the name of religion. It is a primer on child abuse as well.

Absolutely. Knowing she eventually escaped made each step she took in that direction riddled with anxiety and anticipation.

Anyone who reads this book will wonder how Scientology continues to survive.