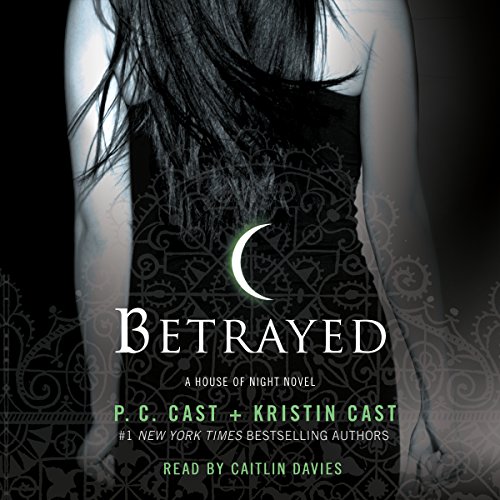 Betrayed, the second installment in the best-selling House of Night series, is dark and sexy and as thrilling as it is utterly shocking.

Fledgling vampyre Zoey Redbird has managed to settle in at the House of Night. She's come to terms with the vast powers the vampyre goddess, Nyx, has given her and is getting a handle on being the new Leader of the Dark Daughters, the school's most elite group. Best of all, Zoey's made some new friends, and she finally feels like she belongs - like she really fits in. She actually has a boyfriend...or two. And despite the best efforts of her mother and step-loser, John, to humiliate her publically during parent visitation, she's earned the respect of her professors and High Priestess, Neferet.

Then the unthinkable happens: Human teenagers are being killed, and all the evidence points to the House of Night, straining human-vamp tensions in Tulsa to a breaking point. While danger stalks the humans from Zoey's old life, she finds herself drawn into an intoxicating forbidden flirtation that threatens to distract her from the growing crisis. Then, when she needs her new friends the most, death strikes the House of Night. Too late, Zoey begins to realize that the very powers that make her so unique might also threaten those she loves, and she must find the courage to face a betrayal that could break her heart and her soul and jeopardize the very fabric of her world.

the narrators Texan and okie accents ate terrible. as an okie I'm super annoyed if you cant mimic a decent accent then please dont do one.

I have cried and had my heart uplifted and felt so many emotions with this book!! Overall this series so far is excellent!!! I love the twists that I can't predict! Knowing that many questions were answered and yet many more have arose, I look forward to seeing how this plays out for Zoey and her friends in future books!!!

I love this series, but I’m actually considering stopping before finishing because this performer grates on my ears so much. Is over articulation something that we have permission to complain about? Every single consonant that Caitlin Davies pronounces gets so much real estate that I have to listen at a faster rate to help blend it all together.

Again, love the story, totally fun, but the performance is annoying.

Great book as always, but an awesome voice to compliment it now. Worth listening to.

I think that Caitlin Davies does wonderful at giving each character their own unique voice, but I'm not crazy about how she over enunciates her words. It makes the story feel a little unauthentic. great story and okay narration though. The only thing I absolutely hate is how freely they throw around the word retard.

First let me say if you can go read the official Graphic Novel called Legacy before reading this second book in this incredible series. If nothing else it gives you a grate visual reference to the characters we have already been introduced to. With no spoilers to this story btw. Now this book itself had me engrossed from the beginning. To say her love life is um...complicated is a big understatement. And we get to start to see what Nix meant when she told Zoey “Darkness does not always equate to evil, just as light does not t always bring good”. And the relationship dynamic between Zoey and Aphrodite is quickly becoming one of my favorites. It could have been so easy to just make her the bully“hag from H*ll” and that’s all. But you learn more about her and get to see her as more than a 1 dimensional character. And on the flip side they don’t make Zoey and Aphrodite BFFs either. Keeping true to how each would react despite what would be convenient to the story. Not all issues get solved, but you get the feeling things are really Vamping up (sorry! Bad pun. :-p ). One word of warning I wish I had been given. Be sure to have some tissues, there are some tearful moments in this one.

The story was good but the voice actress detracted from the mood with awkward speech patterns. Her tone and inflections didn't always match what the story called for.

That said, it was an entertaining experience.

I liked the main character Zoey and I really like how the narrator keeps you hooked on the story.

Very great book Caitlin Davies reads it well! I enjoyed it very much I will be getting the 3rd book