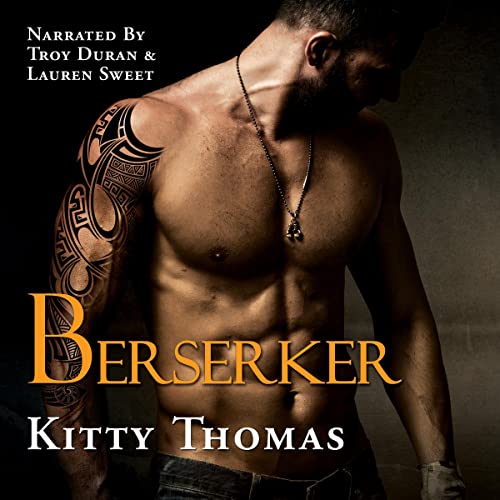 I have a special power, the ability to calm a berserker, but I’ve been warned never to use it. My mother said, “If you see a berserker in a rage…not your monkeys, not your circus. Get the hell away. They’re too dangerous, and you’ll lose your freedom.”

But the thing is…we’re flying 30,000 feet in the air in a speeding aluminum cage, and there’s a berserker raging out in the aisle beside me. Security won’t be able to hold him. They won’t be strong enough. They have no idea what they’re dealing with. And if he gets a taste of blood, he’s going to rampage through the entire plane, leaving a path of death and destruction, including me.

I’ve never used my power before. I’m afraid it won’t work and he’ll turn on me, but I know all too well what these beasts are capable of. There’s nowhere to go, and he’s just getting started. I have one option: calm him and hope I can escape when the plane lands.

This is a stand-alone. No cliffhanger. Guaranteed happily ever after.

I was totally engrossed in this! I love mythology, but this is the first time I got to really read, or in this case, listen, and learn about Norse mythology (minus what I know about Thor lol). I was fascinated from the very beginning. Lauren Sweet and Troy Duran completely captivate, most especially Troy Duran. His deep voice is extremely yummy to listen to, and extra when he is Berzerker. I want more more more!!

I really would have liked more story, longer. You just get a taste of what this book...could be and then it's over. For being so short though you do get an understanding of who the characters are. I'm just really sorry it wasn't longer. A backstory would have been great because Ms. Thomas gave herself so much to work with.

Wow! I loved this audiobook. The narrators did a great job bringing these characters to life. Chloe, Cade and the Berserker struggle to find there way. Chloe wonders how she will be able to live tied to a killer. And Cade didn’t realize what he was getting into. He hates that the Berserker is hurting Chloe. But eventually they spend enough time together that everything evens out and they all get their happily ever after. I did receive an advance copy for my honest review.

If you like dark, sexy tales, you'll love Berserker. The story was fascinating and the narration was fantastic.

I really loved reading Berserker but listening to the audible brought the book alive. It wasn't quite as dark and twisted as Kitty's other books but it still had some dark elements. The storyline grabbed my attention from the beginning and I just didn't want it to end. I was laughing to myself about the whole plane ride because I have flown to Paris and flying over water isn't the best and just thoughts of crashing into the water, but that is not what Chloe gets. She comes face to face with her worst nightmare, Berserker Cade. We go through some ups and downs, twists and turns and we are questioning what will Chloe do?? In the end we have all the answers and I have to say if you want to be entertained, I recommend listening to this book!!!

The story
I really liked this book and the lore behind the Berserkers and Valkyries and I'm excited to find out more! I really enjoyed Chloe and Cade. Chloe tries so hard to outrun the Berserker but she can't escape the magical link between them. I really liked Cade's character was just along for the ride trying to find out what is happening to himself now that the Berserker is a part of him. The novella was a slow burn but once you get to the second half things start moving quickly and I loved it. \

The narration
I love Lauren Sweet! She sounds so cute! I always enjoy her narrating. Of course Troy Duran is amazing as always also another great narrator. I also love that this book has double narration where the male characters lines are voiced by the male narrator and the female character's lines are narrated by the female narrator back and forth in each chapter rather than one chapter by one narrator and the next chapter from the other narrator makes it sound like you are actually listening to a story from two characters.

A novella but so worth it!

Kitty knocks it out of the park again! Ive been looking forward to this book for a while and it did not disappoint! Honestly, I could've done with a longer story because I didn't want to leave the world. I cant wait for the next book!
This is my first experience with both of these narrators and I have to say, I'm impressed. This is done in duet narration, which means the woman reads the female parts/lines and the man reads the males parts/lines. Duet narration is quickly becoming a favorite of mine. Make sure to listen to the authors note at the end for info about the next book! Well done, Kitty Thomas, Troy Duran, and Lauren Sweet!

I'm not sure if this is a romance or not but I did enjoy it.
I liked the twisting and turning of Kade and the berserker, and Troy did an amazing job of distinguishing between the two voices. Chloe really came into her Valkyrie power. I only wish we knew why her mother made her so afraid.
Overall in enjoyed this short story.

This was such a great story and so unexpected from Kitty. I love that she is exploring this Berserker world and I hope we get more stories from this world. Both narrators were great and really helped to add depth to the characters. I’d recommend, this story to any fan of romance (dark or light) or fantasy.

Audible Review: I am adding this to my already ebook review for the Berserker - audible.

Kitty Thomas nailed it on the narrators that she chose! The narrators are Troy Duran and Lauren Sweet. This is the first time I have heard either of them.

I agree with Kitty Thomas that Troy was absolute perfection for the narration of the BERSERKER with that husky voice. And, not that Lauren didn’t do a great job too, she DID!

I am not the kind of person that will read books over and over. But I am so happy that I listened to this book! How do I make this worth more than a 5 stars?

ebook Review: 5 STARS
Berserker is a standalone Fantasy romance by another of my favorite dark romance authors!!! Oh boy, I loved this novella! Cade is the Berserker, the Berserker is Cade. The Berserker is living in Cade’s body. Cade never knows when the Berserker is going to show up or even let him out. Like the Dr. Jekyll and Mr. Hyde. Chloe is a Valkyrie. She has been living as a human and her mother told her not to get involved with a Berserker. To run the other way if she ever sees one. Of course that isn’t what Chloe did.

I think Kitty Thomas can write anything and write it well! I loved reading the Berserker. Something a little different from her and I LOVE it!!! Here’s hoping there will be more!!!