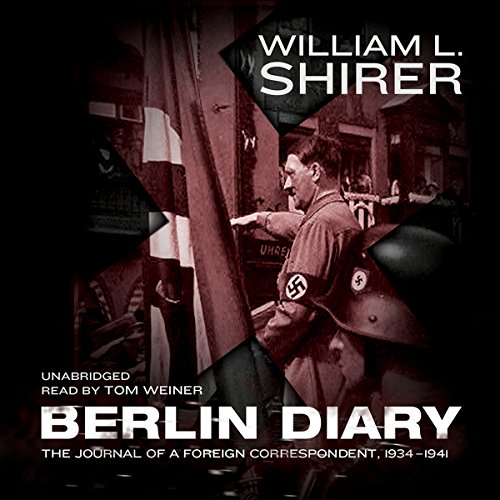 By the acclaimed journalist and New York Times best-selling author of The Rise and Fall of the Third Reich, this day-by-day eyewitness account of the momentous events leading up to World War II in Europe is the private, personal, utterly revealing journal of a great foreign correspondent.

CBS radio broadcaster William L. Shirer was virtually unknown in 1940 when he decided there might be a book in the diary he had kept in Europe during the 1930s—specifically those sections dealing with the collapse of the European democracies and the rise of Nazi Germany.

Shirer was the only Western correspondent in Vienna on March 11, 1938, when the German troops marched in and took over Austria, and he alone reported the surrender by France to Germany on June 22, 1940, even before the Germans reported it. The whole time, Shirer kept a record of events, many of which could not be publicly reported because of censorship by the Germans. In December 1940, Shirer learned that the Germans were building a case against him for espionage, an offense punishable by death. Fortunately, Shirer escaped and was able to take most of his diary with him.

Berlin Diary first appeared in 1941, and the timing was perfect. The energy, the passion, and the electricity in it were palpable. The book was an instant success, and it became the frame of reference against which thoughtful Americans judged the rush of events in Europe. It exactly matched journalist to event: the right reporter in the right place at the right time. It stood, and still stands, as so few books have ever done, a pure act of journalistic witness.

“The most complete news report yet to come out of wartime Germany.” ( Time)

The Real Rise and Fall

If you found "Rise and Fall" to be a gripping book, as I did, then I think you will find "Berlin Diaries" to be a wonderful listen. Here you learn all the thoughts of a witness to an amazing place and time. Particularly striking is the insanity of what Shirer is and is not allowed to report. The world was turned upside-down and Shirer tells you about it as if you were having a drink at the press club. Wonderful insights into easy things that the British might have done better... for example, bombing doesn't need to be massive to be effective, Shirer explains that even small bombings during the night in Berlin have the effect of keeping everyone awake and dramatically affecting war production, not to mention jangling nerves. You see Shirer becoming more and more cynical as the war begins to go badly and his access to real news vs. propaganda is limited. The book leaves you wanting to learn a lot more about his wife Tess who seems like a very interesting character in her own right. Shirer explains so clearly successes of the Third Reich early in the war; you understand what it means to build a war machine, to consider all the technical details, to keep all your aircraft hidden a short distance from the airfields so that the bombing of an airfield produces limited damage. Shirer explains Hitler's misperception of British attitudes. I found the book truly fascinating.

At first I lamented Grover Gardner was not the reader, having found Mr Gardner's reading of 'The Rise and Fall...' excellent. And initially Tom Weiner's pace was too fast for my idea of a 'Journal' reading, my ear adjusted and the content became dominant. OK I am not an historian and I did not study modern history at school. As I listen now, I am having to adjust my understanding of so much that was going on in Europe prior to the official start of WW11. Being a journal the immediacy of events as they unfolded is giving me a whole new picture. I have seen the movies, read the fiction and seen some of the propaganda films released by The Allies, Take on that this is a journal, written as events were being played out and the reflections of William L. Shirer are truly an eye and heart opener. One feels the frustrations and disbelief that leaders at the time behaved as they did.
I am still listening, and so impressed by this 'Berlin Diary" that I can only highly recommend this to any with an interest in World War11, to learn how so important our Journalists are, when free of censorship from government and employer.

Unfolding of war in real time

This diary of William Shirer, published in 1941, provides an unfolding of Europe's plunge into war from 1934-1941 by an American reporter who recorded these events as they happened while he was there during this period. Shirer proved insightful as to what the Nazi's were up to as France and Britain failed to stand up to Hitler's string of demands for more of Europe's land. The narration is excellent as he reads Shirer's diary entries and you feel like you are back there in time listening to the events unfold as Shirer describes them.

If you could sum up Berlin Diary in three words, what would they be?

What other book might you compare Berlin Diary to and why?

"All the President's Men." Although it is non-fiction it reads like a mystery thriller because it's fast paced, the characters are real and as hard as it is to believe that our government and its leader(s) could be so deceitful and cunning, it really happened.

I loved his voice, it is easy to listen to and he doesn't overact; however, you can tell by his inflections that he is relaying the author's mood.

A front row seat to history.

I have read a lot about the Nazi regime and it's march to total war; however, William Shirer's writing brings it to life. I have always wanted to read "The Rise and Fall of the Third Reich" but the length of the book put me off because it seems I never have enough time to tackle it. After listening to "Berlin Diary" I decided I had to listen to "Rise and Fall.." to hear the complete story. I am now listening to it and I'm totally fascinated. My husband and I just took a round trip by car that took a total of 10 hours and we never said much to each other because we were immersed in the story. "Berlin Diary" is a great way to segue into the full story and what a great history lesson.

PLOT: a newsman's view of Nazi Germany from the inside.

William L. Shirer and his wife Tess are living in 1930s Berlin and they view from the inside the Nazi preparing for War. This written in diary form. This starts with the march on the Rhine. This shows us first hand a glimpse into the mind set of Hitler and his Henchmen. We see the people put on rations so the Nazi War Machine can go full force against most of Europe one country at a time. Especially interesting is the Nazi Propaganda hiding the "bombings" on England to give the German People motive to continue the War. We see first hand how far the Nazi Lies go to motive, hide and deceive both the German People and the world. Shirer is both articulate and interesting as he gives us his view of the "inner circle" of Hitler. and we see first hand how FAR the lies of the Nazis go. Included in the start of the "euthanasia" in German with the mentally ill and disabled and why the German excuse of "ending their suffering" was both a threat and lie fulfilled. The READER if first rate and this is both an excellent audio plus a view inside the making of the Nazi climb to power and how they stayed there. I just purchased The Rise and Fall of the Third Reich because this audio was so very good. Typically history is not this interesting. and so very revealing of the "German" mindset and the ruthless way Nazis used it to get a foothold into power and so effectively used it to achieve total control of the German People. Especially effective is the use of Propaganda and total control of the information people received by Newspapers and Radio which "ADDED" to the 'control and motivation' on the road to World War 2. 5 STARS~~~

If you have a slight working knowledge of the Nazi rise to power, this is an amazing document. And since it's a diary being read, it's perfect in Audible form. Don't miss this!! If you're not quite up to snuff on your European Nazi history, listen anyway. That's what the pause button and Wikipedia is for! This reading reminds me of the 9/11 air traffic control tapes, available on YouTube. History in real time. Frightening and maddening. Perfect narrator and narration.

Great book, not the right medium.

Shirer is great. I really enjoyed his massive tome on the Rise and Fall of the Third Reich, and I really enjoyed this, too. Unfortunately, I really wished I had the text for this one. I really liked the story, but a diary like this exists in the twilight world between narrative and reference, and getting it from Audible only really allows you to get the narrative, because it's value as a reference is drastically diminished by the fact that you can't flip through it or search the text. I suppose I could spend a week going through and placing bookmarks and abstracts at the beginning of each entry, but that isn't going to happen soon. So as a story, I highly recommended it, but as an audiobook I would say that you really need to consider what you want it for, because the medium's inherent limitations may get in the way.

BTW, I want to make it clear that I have no problem with the narrator. I gave it low marks on performance, but that is only because it seemed like the best category under which to reflect my ambivalence.

So I am on my second go around of this audio book. I loved it, very detailed, interesting, and greatly narrated. I recommend it for anyone who might be interested in a little behind the scenes action of 20th century Europe.

An amazing insight into life under the Nazi regime

Where does Berlin Diary rank among all the audiobooks you’ve listened to so far?

I am a post-graduate history student and a World War II fanatic. This is in my top 5 audiobooks.

It is a first-hand account of living under the Nazis.

Have you listened to any of Tom Weiner’s other performances before? How does this one compare?

Tom Weiner is fabulous, although he pronounces "short-lived" as if it rhymes with "short-dived".

What did you love best about Berlin Diary?

Berlin diary presented a firsthand experiential account of the rise and conquests of Nazi Germany by Shirer, who was actually there (in Berlin and various other relevant locations) at the time. Presented in diary form, the story unfolded as events happened and became known to Shirer, rather than a narrative by one who already "knew how it would end".

The "voice" of Shirer, the personable way he wrote, the little extras of almost irrelevant diary writings.

No. The diary form made it approachable over a period of a couple of weeks.