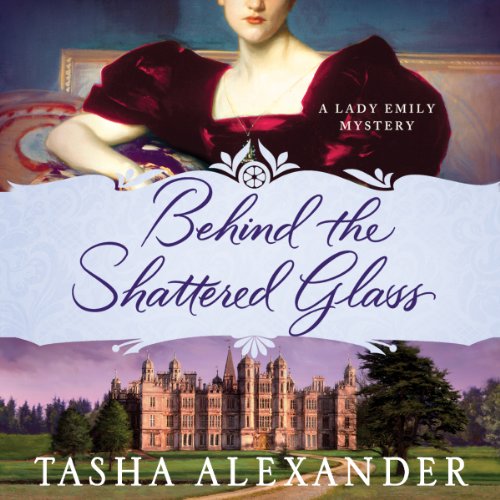 Behind the Shattered Glass

A ruined abbey on a beautiful estate in Derbyshire, a murdered peer, and a most unlikely romance make New York Times best-seller Tasha Alexander's new novel Behind the Shattered Glass absolutely irresistible

But the stately calm of country life is destroyed when their neighbor, the Marquess of Montagu, bursts through the French doors from the garden and falls down dead in front of the shocked gathering. But who has a motive for murdering the young aristocrat?

The lovely cousin who was threatened by his engagement, the Oxford friend he falsely accused of cheating, the scheming vicar's daughter he shamelessly seduced or the relative no one knew existed who appears to claim the Montagu title? Who is the mysterious woman seen walking with him moments before he was brutally attacked? The trail takes listeners into the gilded world of a British manor house and below stairs to the servants who know all the secrets. One family's hidden past and a forbidden passion are the clues to a puzzle only Lady Emily can solve.

As a mystery, I would have given a five-didn't see the resolution coming at all! However, the extremely complex issue of class distinction is handled in such a cavalier manner that it annoyed me. It is a fantasy--future reader, and a romance, with a good mystery added in to it. Enjoy!

What did you love best about Behind the Shattered Glass?

I am so glad that Audible decided to have Bianca Amato narrate all of the later half of the series. She brings a wealth of character voices to the stories and delivers her narration in a believable manner. Despite many of the negative reviews for this particular book in the Lady Emily series, I enjoyed it. Granted, the plot wasn't as complex as some of her other books and I seriously doubt the ending was overly realistic, but overall it was still an enjoyable listen.

Not really as it was predictable in several places.

Have you listened to any of Bianca Amato’s other performances before? How does this one compare?

I have listened to a few of the stories she has narrated and her performance for this story was just as good as previous readings.

I don't know about one sitting but I would say that I wanted to complete the story in a short amount of time.

It could possibly be a great story but I tried to force myself to listen and couldn't. The speech was so hurried I had to keep backspacing to make sure I heard it right.
There was nothing in the beginning of the story to grab the attention, it started out very boring and I don't know if the rest of the story was like that as I stopped listening. It was a shame as I like Bianca Amato as a narrator.

I love these mystery novels! The reader for this novel is fantastic, too. Highly recommend this book for those who like mystery and historical fiction.

I love that there are still great stories not filled with smut. thank you Tasha Alexander