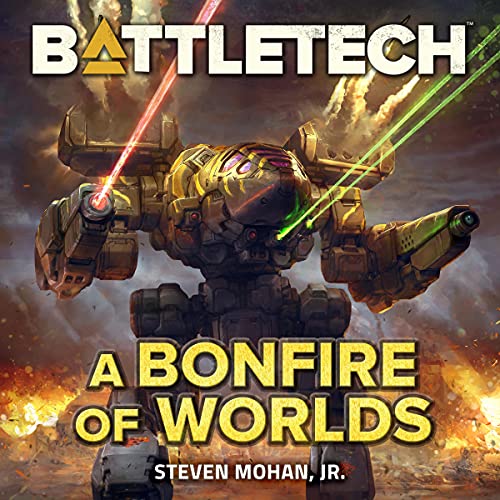 The universe has gone dark. Interstellar communications has been lost across the Inner Sphere, threatening the corporate giant ComStar - and maybe civilization itself. Risking everything on a last chance for survival, ComStar has kidnapped the engineering genius Tucker Harwell, hoping he can unravel the mystery of the blackout. But Tucker isn’t just working on why it happened...he’s also trying to figure out who’s behind it.

Meanwhile, Khan Malvina Hazen solidifies her hold on a purified Clan Jade Falcon while hunting for the next enemy to crush under the talons of her brutal Mongol Doctrine. Hundreds of light-years away, Clan Wolf is carving out territory along the Lyran Commonwealth/Free Worlds League border - and Alaric Wolf is primed to make his moves in the halls of power.

Plans years in the making begin to come together across hundreds of star systems, and secrets hidden for decades will finally be revealed while an empire goes up in flames....

First off, this is the first book I have read or listened to from any timeline later than clan invasion.
While I still prefer the earlier timelines this book was well written enough to get me interested in reading more of the newer books.

The narrator performance is great in this and the Grey death trilogy. The only complaint I have if Tren Sparks is to be the main narrator for Battletech is that I want all the books NOW and he can only do one at a time.

Audible needs more battletech titles only use audible for this franchise. It's such a great and deep lore

Alric is an awesome character in this book.

loved this book. its a great book taking place in the ilclan era of battletech. Alric is an amazing character. smart, strong, bidding his time. look forward to more books like this.

I got lost in the story and had great time listening to it. it was great.

I have been a follower of the Battletech/Mechwarrior/Etc Universe for much of my life, but the novels have always alluded me. Finally however, I decided to give them a go, and started with this one.

The story is written in a very novel way, never really committing to one main protagonist, and instead bouncing between around half a dozen main characters throughout. These characters sprawl over the many factions of the battletech universe, and in fact many of them are in direct opposition to one and other, but somehow the novel never managed to confuse me, and throughout I had a very good understanding of each scenario and situation.

And these stories all managed to be very engaging, There was a lovely air of tension to the story, and I found myself rooting on the characters from the sidelines. The way it is written is also beautifully descriptive, painting a vivid picture of the scenes being portrayed. The universe of Battletech has hundreds of Mechs/Vehicles/Armors/Etc, and I would go so far to say almost no one has memorized every such design. But whenever one of these such machines is involved, the author gives it such a vivid description, you can basically always get a good picture of it in your head.

One scene that stuck out to me in this way involved one such Battlemech acting as a guard for some high royalty. The author really portrayed its massive scale in contrast to the small but valuable noble, describing the static in the air as it guarded them, the deafening crack of is firepower. It all gives off this sense of awe and horror of the machinery this universe is written around.

If I had to make one small critique, it would be some of the writing is a bit dated and awkward. From what I can gather, this novel is a collection of shorter works from 2009 (Which would explain the piecemeal format of the book). And while it hardly ruins the novel, you can at times tell when this was written. Namely in how women are often described, frequently committing multiple paragraphs to her physique, putting focus on things such as her 'Hourglass figure" or "Massive chest". And while this could just be the writer making sure to paint a vivid picture of the characters, this level of detail is never given to the men.

Again though, this hardly hurts the story, it is just a bit awkward at times (Coming from someone who is in the process of getting their girlfriend into Battletech).

Finally, I would like to take a moment to appreciate the voice acting talent of the narrator of this story, Tren Sparks. I have often been scared away by audiobooks due to a narrator. As they often far too bombastic/exhausting, far too disengaged, or simply fail to reflect the tone of the story. Sparks however gives each scene the justice it deserved. With calm/idle scenes being given a serene, idle air to them, tense scenes spiked with just a touch of malice, and action scenes being told with a sense of urgency, he always manages to get the tone right.

His falsetto tone for when he voices female characters is also somewhat entertaining, but never takes away from the scene. After the initial shock wears off and you've got something of a chuckle out of a full grown man voicing a 10 year old girl, you immediately are snapped into the role, and the voice suddenly feels right.

So, all in all I quite enjoyed the listen. Despite its length the story stays engaging throughout, the narrator does an incredible job, and despite some personal gripes with how some characters are written, the story paints an incredibly vivid, and at times horrifying picture of the universe. I would recommend it to most, perhaps not as a starter piece to the universe, but certainly for the novels.

And with the IlClan Arc just beginning, I am hopeful the audiobooks for those as well will be added in due time.