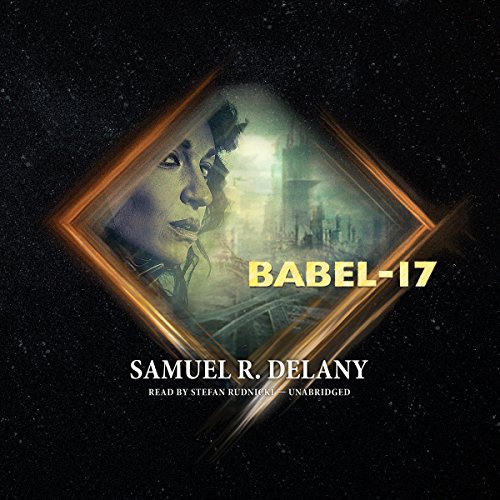 Babel-17, winner of the Nebula Award for best novel of the year, is a fascinating tale of a famous poet bent on deciphering a secret language that is the key to the enemy's deadly force, a task that requires she travel with a splendidly improbable crew to the site of the next attack.

Looove it the story but...

The story is amazing and unlike nothing I've ever heard. My only complaint is that the narrator's voice is so deep that it's sometimes hard to understand. Sometimes it sounds like a low rumble or growl. I did find myself having to go back every now and again, but overall Mr. Rudnicki did well.

Great Concept, Not Quite the Narrative Tech

He has a beautiful voice, but his register is so low that it's sometimes hard to hear.

Reading this book is a little like going back and playing one of those early home video games, something like the first generation of Castle Wolfenstein. There’s something to it, something you know you sensed when you played the game way back when, but you can also clearly see how the technology limited the final effect.

This one has a fabulous premise: the “bad guys” develop a language that corrupts its speakers. It functions less like a human language and more like Fortran or Basic – languages that direct a machine to do a thing without giving it the vocabulary to comprehend itself. Without that sense of self – without the concept of “I” – it isn’t possible to resist the codes one’s programmed to do. In the world of the novel, it turns its speakers into sleeper double-agents, people who aren’t aware of their own duplicity.

I can give that kind of a summary largely because of what I learn in the final pages of the novel, when one of the characters – having been reprogrammed of deprogrammed – explains the phenomenon to everyone else. Otherwise, this is a hard-to-follow story. We get a lot of quick cuts, a lot of characters introduced by pronouns rather than given names, and a lot of action committed by characters under the control of other wills.

Much of the story moves forward through dialogue, often a clunky narrative technology but especially so here. How, I ask, can we contemplate the power of language when we are so trapped in conversation. There are “technologies” that might work better – stream-of-consciousness, multiple narrators, deliberate fragmentation – but Delaney tends to stay with a conventional approach here. He does push against it a little – we get some attempts at weird-angle limited omniscient third person and he opens each chapter with long, allusive quotes from Marilyn Hacker’s poetry – but, ultimately, he doesn’t seem to have the tools to get his fabulous question across.

I don’t think he’s alone. I’m cooler on his contemporary Philip K. Dick than most, and there was a lot of other high concept, overly pedantic sci-fi in those era. It was common for sci-fi to come across as cold, peopled with characters who seem props for ideas rather than characters in their own right. In some ways, the original Star Trek had the same problems: big ideas without quite the special effects to pull them off. It took Star Wars (on screen) and Dune (in print) to begin to develop that technology, and now we have Guardians of the Galaxy (on screen) and Neal Stephenson (in print, when he’s on his game).

There’s certainly something here, and I also acknowledge I read this too quickly to get everything from it. I suspect I’d have been in awe of it if I stumbled onto it as a 13-year-old in 1978. I don’t mean to say I’d have gotten all the bio-linguistic points it raised, merely that I think I’d have sense it even then as pushing toward something it couldn’t quite yet say.

I have the chance to hear Delaney a few weeks from now, and I’m keeping an open mind. I’m blaming him here for a limited technology, but it’s just as possible I’m not bringing all the reading tools to this that I should.

Reader's voice is very deep, which sometimes made the words difficult to understand, especially when driving. Story line felt like it jumped around a bit and was difficult to follow.
Story intrigued me enough to listen to the end of the story.

Good book, would recommend to read but, not to listen. There recording is defected and narrator's voice is layered and unintelligible about half way throuh.

Very good performance. The editors of this need to fix the defect in the recording.

Don't order this, as the defect makes the entire listening experience frustrating.

If you're widely read in SF, this is probably your best introduction to Delany. It's one of the most conventional novels that he has written. It has a plot! Wow. And a bunch of SF troupes. Stick with it.

I've read most of Delaney. It's always a little off. The books got better once I learned something about the author's life and epoch.

The story is focused heavily on ideas from linguistics, in particular the Sapir Worf hypothesis. While that may have been cutting edge in the 1960s, it is pretty outdated now. While words certainly can be used to frame arguments and manipulate people, that ability is not all that tightly bound up with the language itself.

This audio book ensures that I will never again listen to a novel with characters as an audio file unless the narrators are proven to be exceptional. The narrator delivered the lines of the central brilliant woman protagonist in a simpering whimper offensive to the politics of both book and its feminist queer author. Shame on the makers of audio books for continuing to deliver predominantly male titles with predominantly clueless, boring male narrators. Back to the drawing board.

I'm old but this is OLD

Pretentious and dull. I don't need fifteen words to express this book but it is required.

I honestly couldn't see the point of this story. Stephan was great as usual. Rather disappointing.

The performance is so natural and compelling that I forgot everything and was sucked into the world.

The writing is so enjoyable. The multitude of layers all work together to drive the experience.
This author is either very naturally talented or a crafts person at using language like puppet strings.