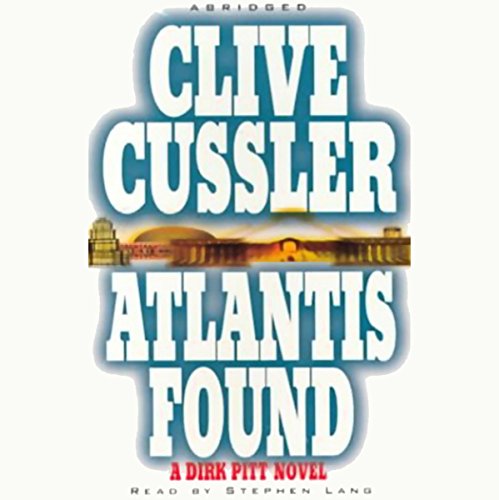 September 1858: An Antarctic whaler stumbles across an aged wreck, her frozen crew guarding a priceless treasure.

March 2001: A team of anthropologists is buried under a mountain by a deliberate explosion.

April 2001: A ship that should have died 56 years ago reappears, and almost sinks a National Underwater and Marine Agency ship.

Dirk Pitt knows that somehow these events are connected. His investigations lead to an ancient mystery with devastating modern consequences, and a diabolical enemy unlike any he has ever known. Now, he is racing to save not only his life, but the world. The trap is set. The clock is ticking. And only one man stands between the earth and Armageddon.

If you could sum up Atlantis Found in three words, what would they be?

you should always offer every book in an unabridged version and let the customer decide on which version to buy. Also what the heck is going on with discontinuing older books from this author if my device fails and i lose the book now there is no way to download it again, is audible willing to reimburse for those titles that were previously purchased but now are not available anymore, I don't think so

I'm sorry I need the whole story, where can I find the unabridged version.

Would you ever listen to anything by Clive Cussler again?

yes the unabridged ones

If you could play editor, what scene or scenes would you have cut from Atlantis Found?

you already cut too much

What disappointed you about Atlantis Found?

I realize that abridging a Clive Cussler novel is difficult. The books are long with many interweaving plots and characters. However, I have listened to a few abridgments of Cussler novels and been satisfied with the abridging. This abridgement of Atlantis Found was incredibly poor. It is very difficult and frustrating to follow. Whomever chose the text to include in this abridgment did a very poor job. I would not recommend this abridgment.

Well done but can tell it's abridged. To many things happen to fast without the great detail Cussler provides. Shame full version is not available.

The Abridged version is poorly edited. Much of the story is lost with out the missing edits.

It is a shame that it was abridged

when I was much younger I read this book and so much enjoyed it. I thought I would listen to it this time and was sad to see all there was was a bridged versions. there was so much of this book cut out. that I would say it was only okay to listen to

At this point Dirk Pitt, the main character of Cussler's books, is getting a little long in the tooth but it is fun to fall into his world of adventure and suspend belief for an afternoon.

Is there an Atlantis? Only Dirk could find it, probably by diving all by himself and holding his breath the whole time! He reminds me of the guys from the old movies whose hats never fell off while fighting. Hey but who cares? The story is fun, regular characters in full force and once again the world is safe!

I found this Clive Cussler book shorter than ones I normally listen to, so it went very quickly for me, BUT - This was a fast book very entertaining and would be great for a day car trip for vacation,
Heather

this narrator was hard to listen to, he was very bland. love this authors stories.