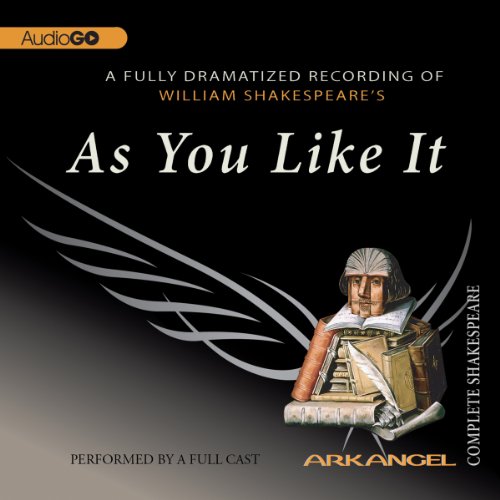 This pastoral comedy is one of Shakespeare's best loved, owing to its delightful heroine - the wise, witty, and virtuous Rosalind.

Rosalind, daughter of the deposed Duke Senior, is exiled from the court by her wicked uncle. Disguising herself as a young man and accompanied by her cousin Celia, she takes refuge in the Forest of Arden. In the forest Rosalind meets Orlando with whom she is in love, but her male disguise complicates matters, especially when Rosalind finds she has unwittingly attracted the shepherdess Phebe. But out of the confusion comes reconciliation and forgiveness, and all ends happily.

Rosalind is played by Niamh Cusack, Orlando by Stephen Mangan. Victoria Hamilton is Celia, and Gerard Murphy is Jaques.

Ce que les auditeurs disent de As You Like It

I read along with the version edited by Dolan, and I believe there was only 1 word that was different from this version. I cant imagine having to read this alone/without separate voices. Well done.

Can't bother with a title

&quot;All the world's a stage,
And all the men and women merely players:&quot;
-- William Shakespeare, As You Like It, Act 2, Scene 7

'As You Like It' has many things to commend it as a play. It is entertaining and filled with fantastic lines. It contains many of Shakespeare's favorite tropes: gender bending, mistaken/hidden identities, family squabbles/usurpation, love/lust, revenge, etc. It starts off well too -- but in the end, for me, it just sort of fizzles and farts out a bit. Limps out, perhaps, is a better way of stating it. Surrenders to an almost contrived and overly neat &quot;happy Hymen ending&quot;. THIS is Shakespeare at his most fit. He is at the top of his game. This play, however, seems to be a bit phoned in at the end. Perhaps, Shakespeare knew he was about to deliver Hamlet.

Also, to be fair, this play does GET a lot of play. It is a crowd pleaser. A romance. A fancy. So, perhaps I'm just wanting him, unfairly, to hit home runs every time at bat. Mostly, I was displeased with how easily the villains (if you could call them that) turned. What? Suddenly, out of the blue Oliver de Boys sees the light? What? And all it takes is for Duke Frederick to run into a hermit in the woods and becomes religious. Ok. Weak, but OK.

Also, I'm not a big fan of music in Shakespeare's plays. Some probably dig it. I'm not in that camp.

Here are, however, some of my favorite lines, as you like:

-- &quot;Always the dullness of the fool is the whetstone of the wits.&quot; (Act I, Scene 2)

-- &quot;Oh! how bitter a thing it is to look into happiness through another man's eyes.&quot; (Act 5, Scene 2)

I got a copy of the text from the Folger Shakespeare Library and printed it out. (You can also read it online.) Then I listened to this Arkangel audio production and followed along in the text. For the first time, the magic of Shakespeare was revealed. The production of the audio is wonderful. In a theater, it is hard to catch the dialog and just the audio is not enough. I plan to do this with every Shakespeare play. I wish I had discovered this sooner!

This really great. The dramatization is excellent and the voices are all well distinguished. Of course it helps a lot to read the text of the play while listening. The songs are also really good. As You Like It has more songs than any other Shakespeare play and here the music is very well done.

Excellent accents, pacing, and dramatic effects. You can understand plot without knowing every single word's definition.

...with one of Shakespeare's weaker plays. Lots of singing and music that were really enjoyable.

I love all things Shakespeare. This comedy is a refreshing piece from all of the drama and tragedy more commonly associated with his works. The Arkangel production never fails to inspire and mesmerize.