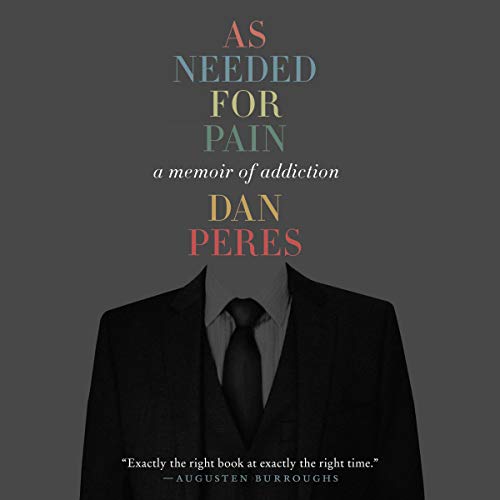 As Needed for Pain

As Needed for Pain

In the vein of Mary Karr’s Lit, Augusten Burroughs’ Dry, and Sarah Hepola’s Blackout, As Needed for Pain is a raw and riveting - and often wryly funny - addiction memoir from one of New York media’s most accomplished editors which explores his never-before-told story of opioid addiction and the drastic impact it had on his life and career.

Dan Peres wasn’t born to be a media insider. As an awkward, magic-obsessed adolescent, nothing was further from his reality than the catwalks of Paris or the hallways of glossy magazine publishers. A gifted writer and shrewd cultural observer, Peres eventually took the leap - even when it meant he had to fake a sense of belonging in a new world of famed fashion designers, celebrities, and some of media’s biggest names. But he had a secret: opiates.

Peres’ career as an editor at W magazine and Details is well known, but little is known about his private life as a high-functioning drug addict. In As Needed for Pain, Peres lays bare for the first time the extent of his drug use - at one point a 60-pill-a-day habit.

By turns humorous and gripping, Peres’ story is a cautionary coming-of-age tale filled with unforgettable characters and breathtaking brushes with disaster. But the heart of the book is his journey from outsider to insecure insider, what it took to get him there, and how he found his way back from a killing addiction.

As Needed for Pain offers a rare glimpse into New York media’s past - a time when print magazines mattered - and a rarefied world of wealth, power, and influence. It is also a brilliant, shocking dissection of a life teetering on the edge of destruction, and what it took to pull back from the brink.

As Befuddling as His Addiction

Dan Peres is no Graydon Carter. He's no Art Cooper. He's no David Remnick. He's no Jann Wenner. They wouldn't have given us pat explanations for it all. I wanted this book to be so much more than it is. Dan Peres spent years at the top of the most glamorous ladder in the mag world -- a (sort of I guess) powerhouse editor for a deeply influential magazine, at one of the world's great mag publishing companies. And yet, he could have been a lad in the mailroom. Why he's at the top, how he got there, what he did that made him an editing superstar...it all remains a mystery within an enigma. So, for that matter is his addiction. He seems to be hooked on Vicodin just because, I don't know, it's Thursday and it seems like something to do. The book is (sort of) entertaining...but so shallow. More, I want more. Had I been his editor, I would have sent this manuscript back, demanding...depth, insight. Like I said, so much more. There's a void at the heart of this book. And Peres does little to fill it.

As Needed For Sleep

I couldn’t even finish this bloated, self serving and uninteresting memoir. It’s no wonder Details will be remembered for its great design and writing because this unapologetic pos had nothing to do with it. The narrator? Just like Dan Peres skipped work, they must have skipped auditions.

An honest and forthright story. Actually left me wanting more...Who was the rock star??

The performance was spot on. I forgot it was being read by someone other than the man who wrote it.

Get Ready to Pull an All Nighter

Wow! Dan’s book is quite a nail biter. I can’t believe that he’s living to tell his story. It takes such courage to tell it. It’s a not a pretty one by any means. Highly recommend this novel. Get ready to pull an all nighter.