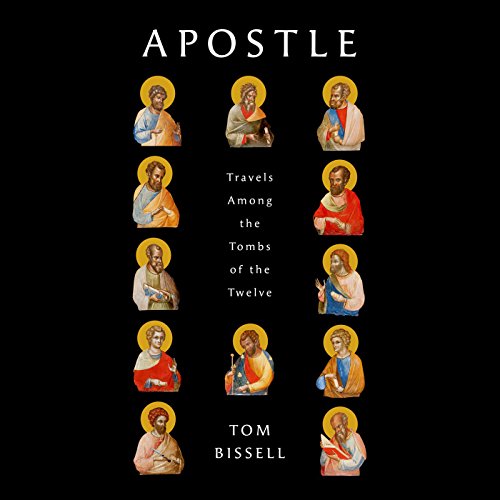 A profound and moving journey into the heart of Christianity that explores the mysterious and often paradoxical lives and legacies of the 12 apostles - a book both for those of the faith and for others who seek to understand Christianity from the outside in.

Peter, Matthew, Thomas, John: Who were these men? What was their relationship to Jesus? Tom Bissell provides rich and surprising answers to these ancient, elusive questions. He examines not just who these men were (and weren't) but also how their identities have taken shape over the course of two millennia.

Ultimately Bissell finds that the story of the apostles is the story of early Christianity: its competing versions of Jesus' ministry, its countless schisms, and its ultimate evolution from an obscure Jewish sect to the global faith we know today in all its forms and permutations. In his quest to understand the underpinnings of the world's largest religion, Bissell embarks on a years-long pilgrimage to the supposed tombs of the 12 apostles. He travels from Jerusalem and Rome to Turkey, Greece, Spain, France, India, and Kyrgyzstan, vividly capturing the rich diversity of Christianity's worldwide reach. Along the way he engages with a host of characters - priests, paupers, a Vatican archaeologist, a Palestinian taxi driver, a Russian monk - posing sharp questions that range from the religious to the philosophical to the political.

Written with warmth, empathy, and rare acumen, Apostle is a brilliant synthesis of travel writing, biblical history, and a deep, lifelong relationship with Christianity. The result is an unusual, erudite, and at times hilarious book - a religious, intellectual, and personal adventure fit for believers, scholars, and wanderers alike.

"What a fine and wise book this is.... In its wisdom it ought to be a guide for the future." ( The New York Review of Books)
"Well-documented, with an extensive bibliography, this is a full-bodied read for the intellectually curious." ( Library Journal)

In perfect conformity with its title, this work reports the author’s travels to the purported resting places of the twelve Apostles. To his often overly detailed wanderings, Tom Bissell adds his thoughts on Christianity and religion in general. Strangely, it is not explicit exactly when the visits to Italy, France, India and other countries were made and whether they are presented in chronological order. It is striking that the author planned his visits rather poorly, arriving for instance in Chennai and asking around for the place where Saint Thomas is believed to have been martyred. Why didn’t he use the Internet or good old guidebooks and maps? Similarly, he claims to walk into a Church in Rome and to ask for someone knowledgeable to guide him around. Why not have planned and set up a meeting or again simply have used written material? Regarding religious matters, the author must have used outside sources but hardly refers to them, what curtails the reader from deepening his own thoughts. It appears as if the author ran out of steam (and probably of time) and the book ends rather abruptly, without a fitting conclusion or even a satisfying rendering of his visit to Santiago de Compostela. In the audio version, there are of course neither photos nor maps which would have added considerably to the work’s depth. Overall, it appears best to pass over this offering.

A great read stumbled upon by chance.

I actually found this book only after listening to "The Disaster Artist", which the Bissell co-wrote with Greg Sestero about the latter's experience filiming "The Room". What a leap in subject matter! I've always had a curiousity about the Twelve Apostles, and this book is pretty much unique in covering them and visiting their tombs, and after "The Disaster Artist" being such a great listen, my interest was piqued. Bissell reads the book himself, and is quite good. While scholarly in presentation in parts, he injects the odd bit of humor, too, and he discusses his experiences with quite a bit of intimacy. His experiences in India and Greece were the sections that stood out the most to me, and I really felt for him in his misery visiting the tomb of Thomas in India.

Fascinating book. the author is entertaining, insightful, and extraordinarly informative. while he does wear it on his sleeve the author does let his personal bias slip through a little too often. a greater level of detail on the academic background of some of the topics discussed would be appreciated.

This work is an absolute failure as a history of the Apostles. Worded with flat ideas that define themselves with words or phrases like; probably, might be, could have, and then builds upon endless suppositions. Like a cheap documentary, this is a work of fiction, which poses as a credible work of fact. No way would I recommend this work to any serious reader.

What made the experience of listening to Apostle the most enjoyable?

slowing the speed of the narrator on my iPod. I am rookie in Christian history and the original narration speed is much too fast (for me, at least) to catch all the ancient names.

Whew, I learned so much. Three things stand out. 1) the description of different groups of Jewish-Christians and 2) how writings were slanted towards a specific group. And, three, the little amount of actual historical truth there is in the whole story of Christianity.

again, speed of narration. Once I slowed down the narration, all was fine.

No, material is academic in nature. However, I did look forward to my half hour listen time each evening.

End of book is not fulfilling. The author goes to great lengths to describe other apostles and the last chapter is very short.
Even with my criticisms, this book is a must read for general liberal arts knowledge. I have found the material to be useful in both my daily life and other readings. I wish the author would write books on similar topics such as the Resurrection, the Gnostic and other non-biblical accepted writings, the chapter of Revelations, etc. The research and time to write this book are to be admired. Bravo!.

This book is a great listen. The author is engaging and what he has to say is well worth listening to. The final paragraph and the last sentence in particular is thought provoking to say the least. Complimenti à Mr. Bissell.

A fascinating historical inquiry into the lives of the apostles; travelogue visiting purported burial places; archaeological questionings; intersections and development of various early Christianities and other religions; and contemplation of religion itself, by an author who clearly has a deep interest in the subjects but is untainted by a religious point of view himself.

Not What It Appears To Be

This audiobook pretends it is a historical investigation of the 12 apostles and what happened to them after the resurrection. However, as the author admits at the opening(which I wish had been in sample), he has lost his faith and is not a believer. So he appears to be writing this book on his investigation of the actual available history of where the apostles went and what they did. Instead Mr. Bissell tries to debunk every bit of what historical evidence there is and point out inconsistancies in the Biblical texts. What comes off is a strong criticism of the Bible, the apostles and the people then and now involved. He does try to throw in some insights but his viewpoint is very biased and often pointed. So please, Bible study fans, avoid this one.

enjoyed immensely. found excuses to go on long walks, drives, etc so i could keep listening. bissell is a great narrator of his book, and really communicates the irony, brevity, or personal incredulity he experiences as he travels the world. he is not a believer, yet he has no particular mission to undermine anyone's faith. in fact, he makes the bible an even more interesting document from a historical standpoint, and he brings a dimensionality to it the King James version of the bible I grew up with simply doesn't have. if clergymen and women could speak to its history, could place the bible firmly in the tensions, debates, and critical challenges of interpretation of their day, and speak to the material life of the document as it went from translation to translation, century to century, they'd have me in church every sunday. i learned a great deal from this. highly recommended. trying to find other audiobooks on this subject.

"Apostle" is worthy of a historian's review but he/she needs to be steeped in religion to offer justice to its review. On the other hand, Bissell's story is a fascinating travelogue.