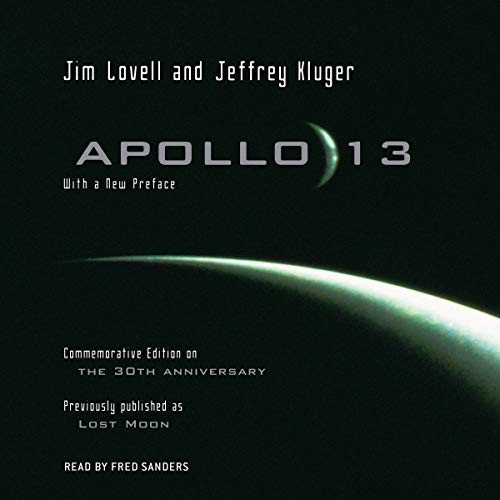 An all-new recording of the landmark number one best seller!

In April 1970, during the glory days of the Apollo space program, NASA sent Navy Captain Jim Lovell and two other astronauts on America's fifth mission to the moon. Only 55 hours into the flight of Apollo 13, disaster struck: a mysterious explosion rocked the ship, and soon its oxygen and power began draining away. Written with all the color and drama of the best fiction, Apollo 13 (previously published as Lost Moon) tells the full story of the moon shot that almost ended in catastrophe. Minutes after the explosion, the three astronauts are forced to abandon the main ship for the lunar module, a tiny craft designed to keep two men alive for just two days. As the hours tick away, the narrative shifts from the crippled spacecraft to Mission Control, from engineers searching desperately for a way to fix the ship to Lovell's wife and children praying for his safe return. The entire nation watches as one crisis after another is met and overcome. By the time the ship splashes down in the Pacific, we understand why the heroic effort to rescue Lovell and his crew is considered by many to be NASA's finest hour

Decades after the launch of the mission, Jim Lovell and coauthor Jeffrey Kluger offer an incisive look at America's waxing and waning love affair with space exploration during the past three decades, culminating only recently when the Apollo 13 spacecraft itself, long consigned to an aviation museum outside Paris, was at last returned to its rightful home in the United States. The story of Apollo 13 is a timeless tribute to the enduring American spirit and sparkling individual heroism.

Great story but a terrible narrator

The story itself is exactly as I had hoped. Unfortunately, the narration is wooden, almost mechanical. There is no emotion in the voice. He literally just sounds like he is reading something for the first time and just pausing at every comma and period. I let my husband hear some of it in the car and we joked that I could've just as easily had it read to me by Alexa and it would've sounded the same. It's too bad because the topic of the book itself is very interesting but the performance had me yawning throughout.

I'm an Apollo nerd that has read every book and watched every documentary I could get my hands on. Many times things get a little repetitive because essentially they are all about the same thing.

Your book provided a deep insight into everything about Apollo 13, far more than any other book or documentary. Just when you think you know what happened, hearing it on your own words has made this a beautiful experience for me to listen to. I'm sorry for what you 3 went through but thank you for it as NASA and all of its space programs and astronauts are what makes me proud to be an American.

Again, fantastic book and this story from a living legend is something I'll be revisiting again soon.

Must listen for space history fans

This book doesn’t drag around, it gets right to the point of the story of 13 and of course little bit of 8.


More compelling and Hardy pounding than any fictional thriller, this account of the Apollo 13 space mission and it's tense moments (of which there were many!) are told in this account of the program by one of the astronauts on the mission, Jim Lovell. Not only does the authenticity of the story make this a superior listen on this message, but the narration by Fred Sanders is also excellent. If the movie is not enough for you to commemorate the 50th anniversary of this memorable act of bravery by these astronauts and the outstanding work in Mission Control to get them h

I have watched the movie Apollo 13 about 20 times. so obviously I loved it. but I have never read the actual account before. so when I got this book and listened to it I could not put it down. it was an insightful account by Jim Lovell of events leading up to the Apollo 13 flight and taking us through bit by bit of what actually happened. I highly recommend.

One of the Best Apollo Books

Read this twice when it was still called Lost Moon, well before the movie. It makes the space program so human, and Lovell has a genuine, compelling perspective that few people possess. The science involved with space travel is presented clearly, and while the focus is on the three astronauts, many dozens of technicians share the billing as heroes. The Fred Sanders narration is outstanding.

I was 13 when this happened and my dad worked for North American Rockwell. This was a great telling of the story.

Riveting! What an amazing story

I was a child when Apollo 13 flew and still remember how focused we all were on this flight and the astronauts’ survival. This first-hand tale of what the astronauts and flight control were doing and the numerous obstacles they encountered brings it all to life. I found myself holding my breath at times. Well done!

So much better than the movie

Great book, so in depth. Movie was good but missing so much. Understandable with the limited time given to the movie

I loved this book...

This book had so many good things (information) that you wouldn't get any where else. I'm going to listen to this book many, many times to fully appreciate it. I highly recomend this book to everyone especially if you like things about space travel.