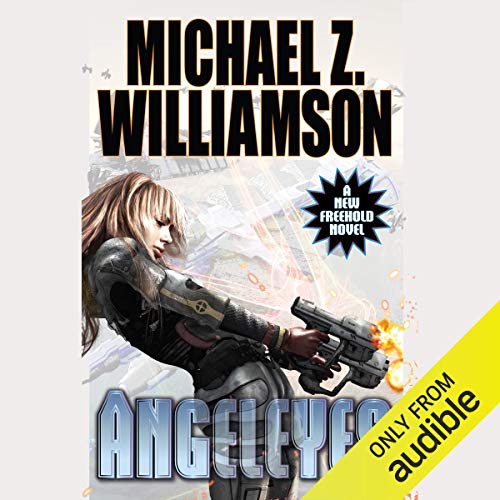 The Freeholders return in a new novel in the nationally best-selling Freehold universe series. A return to the libertarian world of Grainne and its battle against an Earth government that will not let the Freeholders remain free!

Angie Kaneshiro never planned to be a spy. She was a veteran of the Freehold Forces of Grainne and was now a tramp freighter crew-woman who hadn't set foot on the dirt of a world in 10 years. Angie was free, and that was the way she liked it.

Then the war with Earth started. One thing Angie knew was human space. She knew where the UN troops garrisoned, the methods they used to scan and chip their own to control them. Even better, she had a mental map of the access conduits, the dive bars, and the make-out cubbies people used to get around restrictions.

The UN forces may hold most of the stations, the docks, and the jump points, but now the Freehold of Grainne has its own lethal weapon. The Intelligence branch sends a freighter crewed with Blazers, special forces troops. All Angie has to do is lead them through the holes. Responsibility for the explosions and wreckage will be theirs. But war is complicated, and even the most unwilling of heroes can be forged in its crucible.

It's your basic MZW book. He tries adding sex to it. Could have just as easily left it out.

SWF screws her way around the galaxy, oh, and some war stuff happens too. it's poorly written erotica, not sci-fi.

Would you ever listen to anything by Michael Z. Williamson again?

Yes, I really like most of his stuff. I'm back to waiting for a decent next story in this universe.

What does Samantha Prescott bring to the story that you wouldn’t experience if you just read the book?

Was Angeleyes worth the listening time?

Not a waste of listening time, but I'll never re-listen to it again.

Please write another one in this universe soon, it's one of my favorites.

This was my first audiobook (aside from some lectures from the Great Courses but that is a different matter than this) and while I still most enjoy the written word, this was an excellent introduction to the format.

The story was well done as always from Mr. Williamson and a good addition to the Freehold universe. A good expansion on the black ops that ultimately made the difference in the Grainne - UN conflict, sort of like The Weapon only this detailed actions in the space based industries, stations, etc. It is interesting in that it is from the POV of a woman who clearly enjoys sex and makes no bones (ba-dum, tsss) about it. She is a person who differs somewhat from the primary characters of previous books in the universe in that she did her service in the Freehold military and is very capable vet but is now a civilian and is initially in the conflict for her own purposes though later it becomes so much more than that.

The narrator was obviously enthusiastic about the material and did an excellent job throughout with appropriate inflections throughout depending on the character's thoughts or words, also voice tones and accent changes that lined up well with other characters' origins and personalities. Made the main character come alive and feel real, look forward to more of her work.

Danielle Steele could have written this.

I'm no prude, but this read like a romance novel for men. The performance was excellent though. She never seemed to balk at the constant references to codename ANGEL EYES' "cooze" and "cleave." So I guess there's that. It was kinda a disappointing entry into a series that I've really liked.

For Freehold fans, and fans of strong women

Sci-fi fans of good space opera will enjoy this tale from the freehold. Some harsh events show the dark side of war. Worthy addition to the series I wil be listening to again in the future.

Would have been Gr8 SF But 2 Much Lame Pron!

Michael Z writes excellent, engrossing military SF and this book would have been one of his best ever, but for one major flaw. It's almost as if he saw fit to decorate every other chapter with a sex scene more explicit than Penthouse's Letters. Thank you Audible for adding a "Skip Forward 30 seconds" button to the app! I never would have been able to finish this otherwise exciting and interesting story about clandestine ops in the UN/Freehold War.

Best one of the lot

Great story With an INCREDIBLE narrator. Well done, Lady..... I enjoyed the entire series, but this one brought tears.

I have read everything this man has written , some books more than twice. His ability to describe an entire universe while telling a specific story reminds me of the immortal Heinlein. His understanding of science and warfare are impressive. His understanding of human nature and human interaction however is flawed. While this is not the best example of his work I found the story entertaining and an example of good old fashioned "hard" science fiction unlike most of the generic fluff that is found under that label today.