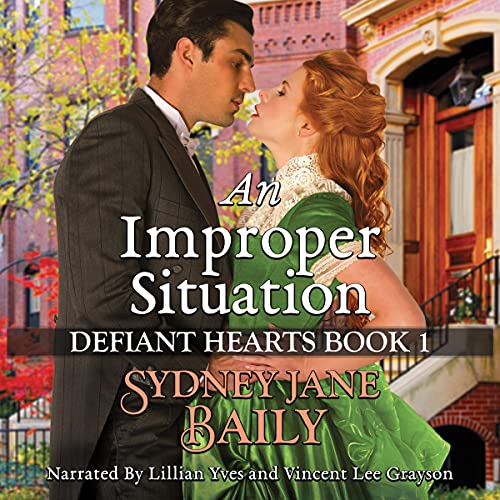 He traveled over two thousand miles to find her....

And yet she is firmly saying, "No, thank you" to raising her orphan cousins. Boston lawyer Reed Malloy cannot believe it. After an exhausting train ride west to a dusty Colorado town, he's not prepared for Miss Charlotte Sanborn, who wears her independence like a suit of armor, cloaks her identity behind her pen name, and flat out refuses to raise her kin!

Of all the gall! How dare this man stride into her home and expect her to rearrange her life?

Charlotte won’t risk any more heartache, not after raising her brother by herself and watching him leave. So why do these children and this handsome stranger awaken a yearning for something more than the life she has painstakingly created?

One letter changes everything....

When Charlotte forsakes all that’s familiar and enters Reed’s world of Boston high society, concealed malice abounds in the Beacon Hill mansions and ballrooms. Facing sinister forces and scorned women - and with passions ablaze - can Reed and Charlotte escape an Improper Situation?

An Improper Situation is Book 1 in the Victorian American series Defiant Hearts. Engaging characters, attention to period detail, and sensual romance - all in this series by highly acclaimed writer Sydney Jane Baily.

"....the ending was perfect.... Many wonderful characters including nasty villains and villainesses. I had a hard time putting it down!" (Lady McNeill, Mrs. Condit, & Friends Read Books)

Charlotte Sanborn is an independent woman, a published reporter who hides behind a male pen name and forsakes society, passion and love. Enter Boston lawyer Reed Malloy, who represents all that Charlotte has forsaken. An Improper Situation is filled with humor, and delicious angst. There are wonderfully rich characters, beautifully drawn and fully developed. Some you will want to invite for tea, and some you will want to invite to tour a maze, draw them deep inside and then abandon them. There is intrigue, complete with a villain and ending I did not see coming! And of course there is romance, searing heated, beautiful romance. Then there is the narration. Beautiful, heartfelt, stunning narration that draws you completely into the story, holds you tight, and does not let you go until the very last words are spoken. I fell in love with this story and I believe you will too! Five fabulous stars!

Historical Romance from Colorado to Boston

I loved every minute of this story..the changes that take place in the heroine and hero from the addition of two orphaned children
Each had found a way to protect their hearts in different ways and yet needing and wanting love and companionship once they grew to know, respect and are attracted to each other
First experience with the author and look forward to more..well written and excellent characters
Of course the two narrators are my favorites who give life and emotion to the story
Well done! I received a free audiobook for an honest and voluntary review.

This is an excellent historical romance story. I loved both main characters, but thought the heroine was a bit too much. She wasn't afraid to ask for anything, yet she refused to tell the hero why she was holding out on his proposal. Wasted time!!!! Smh. Otherwise a great story. I voluntarily listened to a free copy of this and am giving an honest review. The narrators did a brilliant job bringing the characters and story to life.

This is the first book in the Defiant Hearts Series, a modern Victorian American Romance. The title can't be more accurate! Charlotte and Reed's story is beautifully written, sweet, and captivating. Impossible to stop listening! Charlotte, a writer, is a fantastic character, smart, strong, modern, solitaire, and independent. Reed, a lawyer, is handsome, caring, and supportive. They share an undeniable and sizzling chemistry. I liked their banter! Lilly and Thomas, Charlotte's cousins, are awesome. The supporting characters are great, and they have an important part in this story. I liked the fantastic characters, the engaging storyline, the humor, the modernism, the mystery, the twists and turns, and the sizzling romance. Lillian Yves and Vincent Lee Grayson did an outstanding job with the duet narration. I liked their acting, and their flawless performance. This audiobook was really pleasant to listen to, and I highly recommend it. Looking forward to listening to An Irresistible Temptation, the next book in the Series. I received this free review copy audiobook at my request and I have voluntarily written this review.

The story captivated me from the beginning. The story is full of twists and turns but also easy-going. I am looking forward to hearing the following books in the series.

PS I was given this review copy audiobook at my request and have voluntarily left this review.

I received a free copy of this audiobook from Audiobook Boom in exchange for an honest review.
I liked the story, but grew a bit frustrated with the "he didn't actually say he loves me" trope. The story traversed the country when a lawyer from Boston shows up in Colorado on Charlotte's doorstep. With two children in tow, he changed the lonesome writer's life forever. Initially she rejected her cousin's request to take on her children after a tragic accident, The lawyer's insistence and charm changed her mind. Wrought with one disaster after another the story was engaging throughout. The narration was seamless and both voices were diverse and entertaining.

Another interesting, sensual and engaging story from the pen of Sydney Jane Baily which I have thoroughly enjoyed.
Lots of twists and turns, great communication between the characters, a new genre, a fair amount of heat and delightful emotions are written into this story.
I have just finished listening to the audiobook version which was really well narrated by Lillian Yves and Vincent Lee Grayson. This pair have a truly amazing way of helping to bring the story to life and they make it an absolute pleasure to listen.
Such fine entertainment!