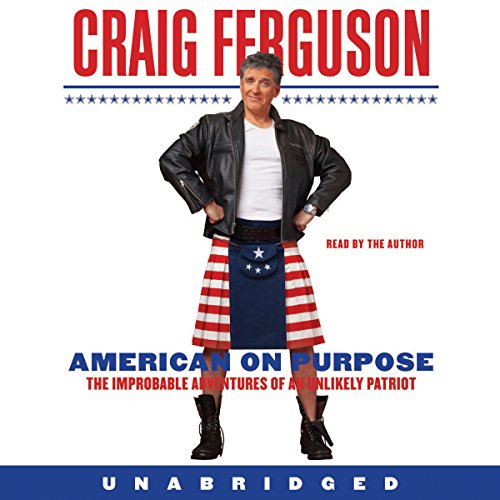 “With American on Purpose, Craig Ferguson somehow manages to avoid the pitfalls of self-indulgence and self-importance that plague most (okay, all) Hollywood autobiographies. He has, instead, written a book that is hilarious and irrepressibly daft, yet also kind, poignant, and undeniably wise. It was a joy to read.” (Dennis Lehane, New York Times best-selling author of The Given Day)

Ferguson delivers a moving and achingly funny memoir of living the American dream as he journeys from the mean streets of Glasgow, Scotland, to the comedic promised land of Hollywood. Along the way, he stumbles through several attempts to make his mark - as a punk rock musician, a construction worker, a bouncer, and, tragically, a modern dancer. To numb the pain of failure, Ferguson found comfort in drugs and alcohol, addictions that eventually led to an aborted suicide attempt. (He forgot to do it when someone offered him a glass of sherry.) But his story has a happy ending: success on the hit sitcom The Drew Carey Show, and later as the host of CBS's Late Late Show. By far Ferguson's greatest triumph was his decision to become a US citizen, a milestone he achieved in early 2008.

In American on Purpose, Craig Ferguson talks a red, white, and blue streak about everything our Founding Fathers feared.

This is an excellent auto biography penned completely by the author himself. Many Hollywood stars use ghost writers but Craig Ferguson does not. It is a pleasure to listen to Craig, with his scotish accent, tell the tale of his upbringing, turbulent years and eventual success in Hollywood. The audible boook allows use to literally hear his pain, struggle, humor and love throught this journey. His story keeps the reader enthralled and wanting more. I have listened to this from start to finish twice and I know I will listen to it many more times. Thank you to Mr. Ferguson to allow us to take a peak into your amazing, terrifing and triumphant life journey.

I first bought this book because I liked Craig on the Late Late Show. I didn't realize it was quite the interested tale of his life. I don't usually like stories of recovering (fill-in-the-blank-aholics). But Craig's is a very engaging and unabashedly frank telling of how he became and is to this day, a person who "screwed" up in many of the ways life doesn't forgive and yet lived to tell about it. His genuinely talented comedic mind takes you on a journey to understanding how he became the man so many of us enjoy laughing with. Welcome to America Craig. We need more people like you who have reccaptured yourself and can share so openly and elequently your heart-felt apologies, your wit and your perspective on what it means to be American.

Craig Ferguson is brilliant in many ways -- writing is just one of them. His memoir, "American on Purpose," is unapologetically honest, inspirational, chock full of unexpected wisdom and teeming with both humor and heart. This audiobook version, read by the author, really brings the book to life in a most enjoyable way. (No, it's not a laugh-a-minute, but neither is life. This is an autobiography, not a television show monologue.)

For the politically-minded, there are a (very) few political thoughts and comments thrown in that not everyone is going to agree with. However, nothing is said/written that is overly vitriolic or hateful, and it in no way overwhelms or otherwise detracts from enjoying this book. It's just one guy expressing his opinion. Which, let's face it... the right to do that is part of the beauty of being an American, whether native born, or -- in Craig's case -- on purpose. Well done, Mr. Ferguson. Proud and pleased to have you as a citizen.

Good listen if you're a fan

As a fan of his tv show and his stand-up, I thought this was a great listen. It certainly sheds light on many of the life experiences he references on the Late Late Show. While there are laughs to be had, this isn't a comedic work, however, so don't purchase it with that expectation.

Craig Ferguson made me almost pee my pants

I never knew how freakin hilarious Craig Ferguson was - I thought he was funny before, but the pure genius of this book won me over. His accent is adorable and the man knows how to tell a story - I could listen to him all day. Really great job of mixing his personal history in with his hilarious musings on how weird the people in your life can be. I thoroughly enjoyed this and recommend it to anyone wanting to be entertained & amused.

This was a great listen! Engaging, funny and heartfelt. Made me laugh, made me cry, made me appreciate my life as a born and bred American. Highly recommend it.

Great Scot! ..and what a patriot

Also being American by choice this book spoke to me in several ways.

Craig takes the listener on an entertaining journey from being a wee Scottish lad, insecure and unsure about himself, through his range of achievements and life experiences.

Understandably he keeps you laughing through the highs of his life but his story telling abilities shine through as he drops you down again and again into his struggle with addictions, yet he still keeps you laughing.

A great listen, and a highly recommended read for the entertainment and motivational value.

I love Craig and this is funny but not pure funny Ferguson. I wanted it to be either longer (more in depth) or shorter with more punch. Still a good listen.

Inspirational and a rollercoaster

As a First generation American myself, I loved to read his story of a fresh-faced new American. It's amazing he survived so much in his young life and turned the corner to a happy ending. Loved this book and gave gifts of it in print. Thanks Craig, write more!!

I loved this book! Craig's sense of humor shines through, even in his darkest hours, and it's even more enjoyable to listen to with his lilting Scottish brogue. He never let his struggles get him down and his love for America is evident. It makes me proud to be an American. I hope someday he takes the top spot in late night TV, he's better than all the rest.

Downright honest but on the other hand warm und subtle.
Craig’s early years full of setbacks and failure made him what he is to this day: an (almost) role model for people who struggle in life but don’t know what to do about it. Read, listen what Craig has to say. Don’t copy and paste his path but extract bits for your own. It’s worth it.
I love(d) it.