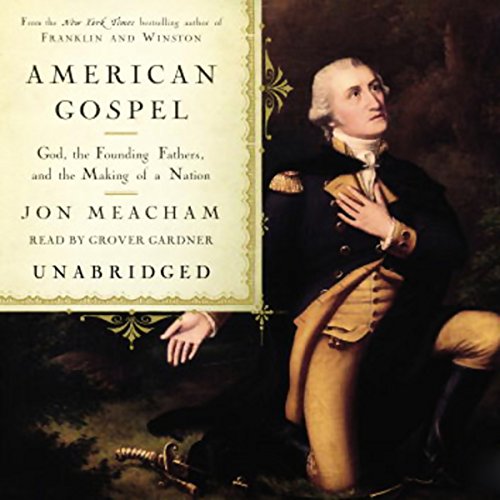 In American Gospel (literally meaning the "good news about America"), New York Times best-selling author Jon Meacham sets the record straight on the history of religion in American public life. As Meacham shows, faith, meaning a belief in a higher power, and the sense that we are God's chosen, has always been at the heart of our national experience, from Jamestown to the Constitutional Convention to the Civil Rights Movement to September 11th. And yet, first and foremost, America is a nation founded upon the principles of liberty and freedom.

Every American is free to exercise his own faith or no faith at all. And so a balance is struck, between public religion and private religion; and religious belief is distinct from morality. As Meacham explains, the well-known "wall" between church and state has always separated private religion from the business of the state, yet religious belief is part of the basic foundation of government. Brilliantly articulating an argument that links the Founding Fathers to an insightful contemporary point of view, American Gospel renews our understanding of history, and what public religion has meant in America, so that we can move beyond today's religious and political extremism toward a truer understanding of the place of faith in American society.

"An insightful and eloquent account of the spiritual foundation of the early days of the American republic." (Tom Brokaw)
"A refreshingly clear, balanced, and wise historical portrait of religion and American politics at exactly the moment when such fairness and understanding are much needed." (David McCullough, author of 1776)

what you weren't taught in school

Do you think the early settlers on our shores wanted to escape religious intolerance and to plant the seeds of religious liberty? Do you think America was founded to be a "Christian nation"? Do you think the founding "fathers" were men who shared a religious or world view with today's Christian fundamentalists/evangelicals? Think again.

Our history is very much more complex and fascinating than quick yes answers to those questions might suggest. Founded by religious men -- without a doubt. But founded too by deists, by agnostics, by men who felt the divinity of Christ to be an idea created by a corrupt Catholic church.

The author does have a point-of-view, of course, and he's not shy about setting it out. But it's fair to say that his aim is to help readers see through our national myths to the varied religious and intellectual currents that brought the country together.

He does it masterfully -- an engrossing yarn filled with information you didn't hear in school, well told, and well read.

Meacham succeeds in a well balanced historical examination of the debate about church and state. Not only is it raging now, globally, it has raged since before the founding of the USA. Well researched and presented. Reader was a bit monotonous, but the content rises above that.
Great read for anyone interested in history, politics, and/or religion.

Meacham offers an excellent and accurate and balanced story of religion in America. He offers a true account of how the two forces of faith and politics danced with one another in the history of the nation. Thank God we have good historians like Meacham!

Public vs private religion in america

I always enjoy Meacham books, but I struggled to finish this book because it reminded me of a history book I needed to read for credit. it's full of good information but it sloughs on and on, going nowhere like this review.

In God We Trust

American Gospel is a wonderful book. Jon Meacham takes us through each era of American History and shows how our relationship with religion as a society has evolved over time. Most notably, he explains how the founding fathers foresaw their impact on our society, in respects to religion, and how the blueprint should be to ensure complete freedom for all regardless of personal belief.

I have listened an average of an hour a day the last 2 years. This is the best listen ever. That includes other Meacham works. It is timely and timeless. Highly recommended.

The issue of religion, both public and private, has had a place in the United States ever since our founding. Jon Meacham brings a historian's eye to this interesting and complex issue. The men who founded the United States came from diverse backgrounds, yet they had many things in common. Meacham shows that the ethics and morality of the Bible have informed and defined the history of the United States from the beginning.

Religion informs the way that we discuss issues and forms our public lives as well as our private lives. Jefferson used religious imagery when writing the Declaration of Independence. Abolitionists used the gospel to fight slavery. The issue was not couched in economic terms, but in the terms of a system that was evil in its nature. Franklin Roosevelt believed that the New Deal was a Christian imperative to help the poor. Martin Luther King, Jr. couched the Civil Rights movement not as a political movement, but as a spiritual movement.

This is an issue that still divides our nation today. This book will help to set the stage for understanding the complex ways that religion in general and the Christian religion in particular still defines how we talk about political and social issues. Both liberals and conservatives will take issue with different points of this book, but maybe that's a good thing. Whether or not you agree with every point you will find a lot to think about with this book.

Neither cold nor hot.

I have read both extremes politically and religiously, regarding this subject and this author's opinion is in the middle. There were several quotations from the founding fathers that would have swayed the reader toward another opinion but they were not included, perhaps due to space limitations, perhaps intentionally. I believe one needs to read a variety of points of view to form their own. Therefore this books serves a purpose, but I would not use it alone to form an opinion. Read other books on the subject and primary sources, but include this book also.

Again, Americans should be reminded of the beginning and the historical impact of that beginning. The Founders intention and the nation's process. Consideration and reflection.