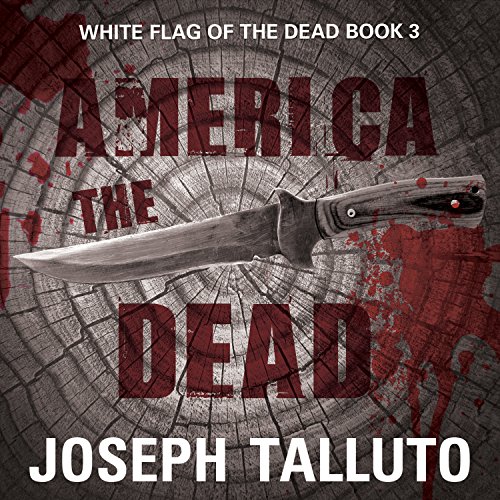 John Talon and his son have survived the Upheaval, the event that saw the dead rising to feed on the living. After two years of fighting off the worst the infection had to throw at them, a new danger emerges that threatens to take apart their small hold on humanity and the one chance they have to rebuild the country.

Sometimes the biggest threat to humanity isn't the living dead, and the survivors will learn if they will live in America the beautiful or America the dead.

Awesome series, can't wait for the next to come out. Book has some slow moments, but well worth the wait.

nope, the entire Major story line is nonsense and cringy enough to make me laugh. Real soldiers wouldn't be caught off guard by murder, real soldiers that are smart enough to point out fake medals wouldn't stand around waiting to be shot. The author tries to make the Major seem crazy but it just comes off as edgy and dumb. No group of half sane people would follow him or let him rape little girls for fun. I hated this book.

It's an entertaining listen

What stands out for me is the banter that the characters have between each other. It helps flesh them out and makes them more rounded for me.

I didn't get very far into this story when I had to turn it off. While I love zombie stories there are just some things that should be off limits. When you hear someone describe the rape of an eleven year old girl it's just sick. I couldn't get my headphones off fast enough. I'm thankful I was using them since my own twelve year old was next to me at the time. I honestly don't know how far he went with his description, I don't care. It made me want to vomit. I bought the first two books and audibles in this series and I'll be deleting them from my device. I likely would have bought the whole series had it not gone that direction. So disappointing. Some lines just shouldn't be crossed.

great addition to the story

very interested to see where it goes. looking forward to next book. narrator is slot on, enjoy listening to him.

all the books while short, are well worth the credits.

I love this Authors work so far however I felt the ending of this one was very gimmicky...to me it said I'm more concerned with making more money off of you by forcing you to read my next book to find out what should of been in this book. I like the authors style and everything I've read thus far but it seems more and more that he is taking one book and making it into two so he can make more money.

Can put it down

I do have to chuckle at their accents like a Texans when they're Yankees from Chicago area. I think this author must have read a lot of Louis lamour in his day. Enjoying them.