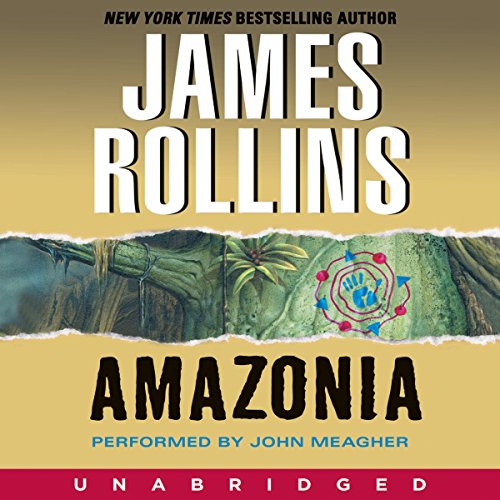 The Rand scientific expedition entered the lush wilderness of the Amazon and never returned. Years later, one of its members has stumbled out of the world's most inhospitable rainforest - a former Special Forces soldier, scarred, mutilated, terrified, and mere hours from death, who went in with one arm missing...and came out with both intact.

Unable to comprehend this inexplicable event, the government sends Nathan Rand into this impenetrable secret world of undreamed-of perils, to follow the trail of his vanished father...toward mysteries that must be solved at any cost.

But the nightmare that is awaiting Nate and his team of scientists and seasoned U.S. Rangers dwarfs any danger they anticipated - an ancient, unspoken terror, a power beyond human imagining - that can forever alter the world.

"Amazonia" reminds me a little bit of Tolkein's "The Lord of the Rings," where a stalwart band of allies sets off on a hopeless mission, against insurmountable odds, to save the world. At each turn, they face a deadly danger that their inscrutable quarry has cast into their path; while behind them stalks an evil hunter out to wrest their prize from their very grasp. Unlike "The Lord of the Rings," however, Amazonia takes place not in Middle Earth, but in the eponymous rain forest; and, rather than Orks, these questers face every other kind of creepy, crawly, venomous, wickedly-toothed creature imaginable ... and then some unimaginable ones, as well. As with all of Rollins novels, "Amazonia" does not lack for thrills or chills. Also in line with Rollins' other novels, "Amazonia" explores one of Nature's mysteries -- in this case: prions. (If you haven't yet heard of prions, you will learn a lot about them here. Suffice it to say that they are real-life deadly pathogens.) However, unlike with his previous novels, with "Amazonia," Rollins adds in a couple of timely, apposite environmental/ecological messages:

1) Don't decimate the habitats of our fellow creatures;

As an herbalist, I very much appreciate Rollins' investigation into the power of native medicinal herbs. As always, he has done his research! Since "Amazonia" was only his fourth novel, I suspect that he was probably still doing that research himself, rather than hiring a team of experts to do it for him. Whatever other reviewers may think of Rollins' writing style (and, I have to admit, he sometimes does write a bit awkwardly in these early novels), I think that his very curious, very intelligent open mind more than compensates for any such shortcomings. I appreciate beautiful writing as much as anyone; but, if I have to choose, then I would value a questing, curious mind even more.

Exciting from the start. Intriguing it keeps you wanting more. fabulous blend of science adventure and creature horror.

Rollins is a creative genius!

As always, Rollins captivates the reader from the very beginning of the story and continuing with intricate twists, personal attachment to the characters, and a sense of "being" in the story. A true story-teller, Rollins will have you on the edge of your seat. I never wanted to leave my car while listening to the audio version!

So dumb its campy

My wife and I listened and found ourselves laughing and comparing notes on how goofy this is. Lots of action for certain. Plot developments could be seen miles away. Characters are one dimensional. And the book needed some editing; the author couldn't get away from the word "mumbled" . So, it is fun in terms of action, and enjoyable if you like to roll your eyes. The reader was fine.

I enjoyed the story. I actually read the paperback years ago too. I understand that with many books, particularly the adventure fiction genre, it can require a bit of a stretch of the imagination, but I struggled to get past the the narrator's voice/voices. It's hard to describe, but he does not have the voice for adventure fiction and some of his accents, tones and characters are laughable. As fantastical as this story is, the narration was the most unbelievable aspect. He reads well, but his voices were a distraction for me. If you're interested in this book, listen to the audio samples and decide for yourself or buy the paperback and enjoy.

Entertaining! Grabs your attention and keeps it

What a great read. This book has it all … love, sex, the supernatural, family relationships and even a worldwide medical dilemma. James Rollins has a unique way of grabbing his reader at the first of his book and taking them on a wild ride throughout the story line and this book was no exception. Rollins always has a bevy of characters that are intriguing, with some being good and always some bad, and intertwines them in a distinctive way. Was the book realistic? Absolutely not. But I don’t read for realism. I read for entertainment … and that is exactly what this book does. It will keep you reading even when you have other things you NEED to do. Even though it is one of his older books, I would still recommend it.

I'm torn on this one. The action, suspense, overall story, etc... was great. On the other hand some of the little things really bothered me. The rangers seemed poorly equiped. I would think thermal imaging would be needed along with night vision considering the importance of the mission. The tribesman that followed the rangers really hated them but didn't mind the "bad guys" that were behind them. Seemed like the other team was able to waltz in while the rangers were being taken out. Just a few things that bothered me a little but overall a good listen. Will listen to this author again.

very interesting story , kept me listening and didnt want to stop...definitly check out more from this author..

Another Excellent Suspense Story by this author. Hard to put down. Amazing author who has created many tales with some truths entwined to make the story more ralistic.

Really? James Rollins? Author of Ice Hunt, one of the most exciting books on the planet? God this book was awful. What a difference a year makes. I'm glad this wasn't my first Rollins book. You got credits? Spend them elsewhere, that's all I'm saying.