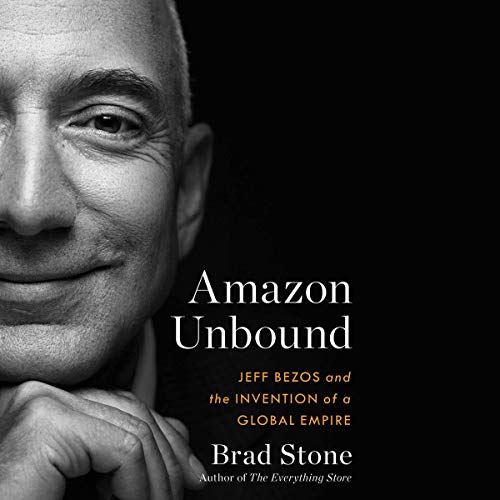 This New York Times best seller is a “masterful” (The Washington Post), “juicy tour of the company [Jeff] Bezos built” (The New York Times Book Review), revealing the most important business story of our time by the best-selling author of The Everything Store.

Almost 10 years ago, Bloomberg journalist Brad Stone captured the rise of Amazon in his best seller The Everything Store. Since then, Amazon has expanded exponentially, inventing novel products like Alexa and disrupting countless industries, while its workforce has quintupled in size and its valuation has soared to nearly two trillion dollars. It’s almost impossible to go a day without encountering the impact of Jeff Bezos’ Amazon, between services like Whole Foods, Prime Video, and Amazon’s cloud computing unit, AWS, plus Bezos’ ownership of The Washington Post. We live in a world run, supplied, and controlled by Amazon and its iconoclast founder.

In Amazon Unbound, Brad Stone presents an “excellent” (The New York Times), deeply reported, vividly drawn portrait of how a retail upstart became of the most powerful and feared entities in the global economy. Stone also probes the evolution of Bezos himself - who started as a geeky technologist totally devoted to building Amazon, but who transformed to become a fit, disciplined billionaire with global ambitions, who ruled Amazon with an iron fist, even as he found his personal life splashed over the tabloids.

Definitive, timely, and “engaging” (Jon Meacham, author of The Soul of America), Stone has provided an unvarnished portrait of a man and company that we couldn’t imagine modern life without.

The narrator is terrible

This is a good book but the audio version is terrible. The narrator is dreadful. He sounds like if was drunk.

Great second part to « the everything store »

Loved it. Especially via Audible, with great voice acting.
My only disappointment is the fact that this book seemed to me more or a collection of facts, rather than a true analysis.

The Best Value You Can Find In Audiobooks

This book is worth ten times it's cost, the time it will take you to read/listen to it, and all of the time you will spend thinking about the subject matter going forward. Seriously, Stone hit it out of the park again with a well-researched, well-formatted, and well-written book that will undoubtedly be read for years to come.

After reading Stone's 'The Upstarts' three years ago, I immediately went to his Twitter to keep an eye out for what he would be working on next. When I saw it was another book about Amazon I was slightly bummed, because I felt like he was THE startup chronicler, and Amazon no longer felt like a startup, but WOW, I was wrong.

Stone weaves enjoyable and exciting narratives across decades. He always has me leaving a book feeling like I'd closely followed the business news surrounding the company (or companies) for years, with the added benefits of a rigorous book editing/fact-checking process and phenomenal insights gathered from exclusive interviews.

Overall, I'm confident you will greatly enjoy this book, just as I have.

not about Amazon but about Bezos

the title lies and that’s the only reason for the 2 stars about the story. I wanted to know a lot about Amazon, and I got entire chapter about blue origin, Washington post, a divorce and a tabloid scandal. They had unfluence on amazon direction so should maybe be mentionned in passing. but there is almost nothing about actually amazon ! sSince the author explained Bezos had less time to give to amazon, this is not excusable. if you re title it as a story about Bezos and not about Amazon, it should be 5 stars

the audio quality is great however

The narrator has such a thick and slurry pronunciation that it makes it hard to follow. Would highly recommend re-recording that book.

Where do they find the narrators?

Enjoying the content a couple hours in, but where do they find these people to narrate? The reader constantly slurs like a drunk person, feel like I need a drink too to get through the rest of the book.

Not the Everything Store

I listened too and enjoyed the authors previous book on Bezos, the Everything Store, however this current book, is poorly written, much of the consent is drawn from Marxist advocates from Union workers to anti business Government officials. The author sites comments by one or 2 disaffects, to lambast the whole Amazon empire. Whether its a disgruntled employee in NJ or an anti business activist fresh out of University, it is short on hard meaningful data. It views anything Amazon says as probably dubious. Very disappointing listen.

Wish it was recounting facts only. Way too politically opinionated. Sounded like objective journalism.

This is no JOBS

Unlike the book JOBS, which illuminates Steve Job’s character through the lens of his inventions and business, this book is all facts and figures — raw research — that does not illuminate Jeff Bezos’ character and is less than the sum of its parts. In short, it is extremely boring, notwithstanding the intelligent and clear performance of the reader.

Enjoyed this one and was surprised by how much! it really captures the ups and downs of Amazon's rise and let's the reader come to their own conclusions.

Really good laying out of the Amazon story. The reader however is just awful. His voice sounds like a half drunk chain smoker from a 60’s corporate training video

Not enough focus on Amazon

The primary reason for my low rating simply is due to the fact that I didn't learn as much as I hoped for. I wanted to learn much more about Amazon, its state and future, but instead I learnt about gossip regarding Bezos. That unfortunately isn't relevant knowledge on any future time frame. AWS also not discussed as much. Too many old stories, not the book update Amazon deserved.
Podcasts with Brad Stone in recent times were better.

Interesting story and continuation of the first book.
A little bit long in the end.

The speaker was perfect