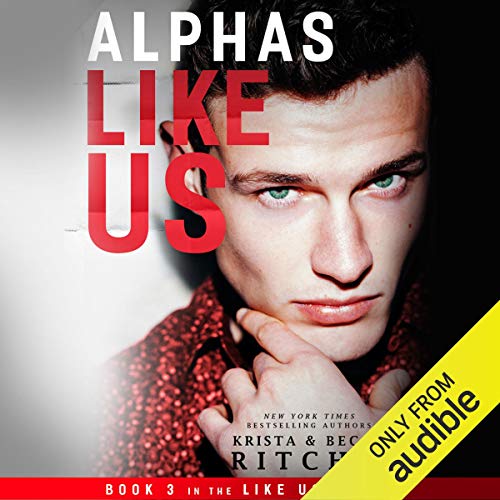 His Bodyguard. His Love.

Maverick, know-it-all bodyguard Farrow Keene knows publicly dating American royalty comes with a great cost. Everyone wants a piece of their relationship. And as a protective boyfriend, he’s not here for the malicious hands that grab at their love life and seek to rip them apart. But Farrow is confident. He’s confident that he could’ve never prepared for the storm to come.

Maximoff Hale isn’t a big fan of change. And to regain the charity CEO position he lost, he agrees to a task that he’s always rejected. One that could uproot his unconventional world. But Maximoff is afraid - he’s afraid of the consequences that could destroy his boyfriend and his family.

Changes are on the horizon. Big. Messy. Complicated. Changes.

Maximoff & Farrow will fight for their forever. And with every breath, they promise that their love story won’t end here. ​​The Like Us series is a true series, one continuous timeline, that follows a family of wealthy celebrities and the people that protect them. You must listen to Books 1 and 2 before listening to Alphas Like Us.

Alpha all the way

Both narrators are just right and bring those characters to life perfectly - laughing and crying moments all accounted for.
Thank you for the amazing work

I never wanted it to end.

Nooooooooooooo! <------- My exact reaction when the audiobook ended, although I think I need a few more ooooos. Add in the fact that I was throwing my head back against the headrest like a toddler having a tantrum and I'm sure I was getting more than a few looks from my fellow commuters last night. I know this series isn't ending, but with the focus moving off of Maximoff and Farrow, at least temporarily, I'm now in a period of mourning.

I love #Marrow so much! I had no idea when I started this series how deeply and completely I would fall. But man did I ever! Fall that is. I am head over heels for these 2. I don't want to ever say good-bye to them! (Whiney toddler tantrum mode in effect.)

Alphas Like Us is more emotional than the previous 2 books. So many tears at different points! Mostly happy tears, but some *hit you right in the feels* tears, too.
Moffy and Farrow love each other sooo much and you could just *feel* it. Ugh, is it wrong how much love *I'm* feeling for fictional characters??? But I can't help it! Seeing how much they cared for each other, how they weren't afraid to show it once they were finally able to be a "regular" couple, they are just so sweet and funny and freaking adorable. How can you not love them!

J.F. Harding and Alexander Cendese are Maximoff Hale and Farrow Redford Keene. They are so perfect as their respective characters! Every time there was a chapter change and Alexander would say "Farrow Keene" I was saying it right along with him- I don't know why, but it just felt right. I want to go back and listen to these books all over again. I foresee them being in heavy rotation in my car.

I am still in love with this series and the narrators! I totally get sucked in to the story partly because of the fantastic writing but also because each narrator makes the characters come alive in ways that me reading text on a page just can’t.

This series is everything. So unbelievably good! I think I might listen to the whole thing again! The narrators are perfect. I can't say enough good things about these books!

Not my favorite of the series

while this book wasnt bad, if you werent as invested with the characters I could easily see how this book would be a boring let down. while I knew these books wouldn't be the addicted series at least the first 2 books had more excitement and turmoil in them. This book was just kind of a let down. I mean the summary for the book literally only touches the first couple hours of the book then that conflict is resolved. theres really no great conflict, I think they tried to make farrow switching jobs the problem but it was honestly just stupid, his whole character was kinda changed for me when he made that switch, and while I I dont agree with how Thatcher handled it, I was like seriously confused and irritated too. then they tried to create something with Farrows EX towards the end and with the porn star but all that too was stupid and kinda pointless. in all the other books the little things or big things all had a purpose, and I just dont see the purpose for alot of the stuff in this book. maybe it will be revealed in a a later book. I will still read this series, but this was a definite let down. at least in the other books when they were in the HEA phase, there was so much emotion behind every scene that the lack of angst wasn't boring! This book was missing a lot of that.


gravely, " and go on till you come to the end: then stop ". Lewis Carroll, AIW

It sounds so simple and it even sounds as a jest; but I did what the King said, I kept going.

I am reading/listening to the Like Us Series till the end. To the last book of this on going series.

Why? Because at this point , I am invested. I care about all the characters in the series.

With that said, it took me a bit to get into Alpha Like Us. This series have so many MC's , main plots, subplots , under-cover-plots😏 über-plots , trivial -plots 😳 that at times it's exhausting . Few times many of those extra, extra plots are left open , unresolved or/and simply forgotten and that is annoying.

At this point of my review, I imagine explanations about who is who in Alpha Like Us is unnecessary as to get here , you had to read books 1 and 2 . These books aren't standalone.

What I liked: Farrow and Maximoff alone time to be a couple. The 5 days in Greece were great. Farrow letter to Beckett . #Marrow 😍 and Maximoff and Farrow's conversations.

What I didn't like: Xander subplot that went no where and didn't contribute anything to the main plot, the same goes to Beckett subplot.

I realize that the Charity auction was part of the plot to introduce a villain but the actual resolution
and consequences of why Maximoff and the others participated and then pull out wasn't really address .

Also , why Maximoff was fired as CEO , when he is the one who brings the money and he the main attraction, it doesn't make sense , at all. In book 2 , it was said because he wasn't in the office enough , but to get money for charity, organizations and individuals reach to the donors not the way around. Sitting in a office doing paper work and staff meetings won't get you donations.

In summary: Even if I wanted to stop with this book, I cannot.

Becca and Krista Ritchie writing style and likeable characters creates a spider web that frankly is impossible to get out.

Onwards towards Tangled Like Us , Thatcher and Jane's story.

As with the previous books the narration and Alexander Cendese and J.P. Harding , actors portraying Farrow and Maximoff did an splendid job bringing these two heroes to live.

Review for the Kindle and Audible versions.

ive listened to this probably more than anyone over and over again. all 3 books. The ritchie girls have created characters especially Maximoff & Farrow that you truly just fall in love with. reminding us all the power of books

I can’t get enough!

I just finished listening to this 3 book series again! That’s how much I love it! Cendese and Harding are excellent narrators who bring the The Ritchie’s characters, Maximoff and Farrow, to life. I can’t wait for their next book.

I really enjoyed this book and finished it pretty fast because I just couldn't get enough of it.