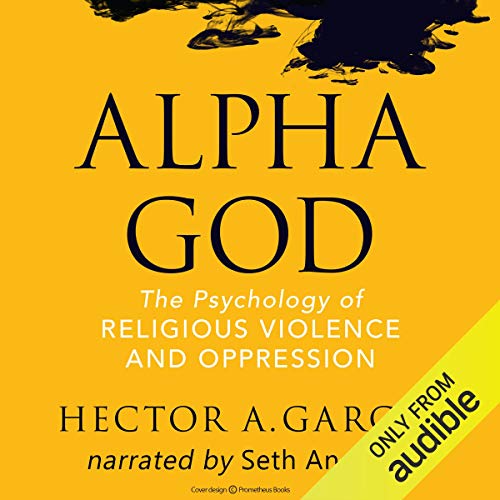 Alpha God: The Psychology of Religious Violence and Oppression

This book uses evolutionary psychology as a lens to explain religious violence and oppression. The author, a clinical psychologist, examines religious scriptures, rituals, and canon law, highlighting the many ways in which our evolutionary legacy has shaped the development of religion and continues to profoundly influence its expression.

The book focuses on the image of God as the dominant male in Judaism, Christianity, and Islam. This traditional God concept is seen as a reflection of the “dominant ape” paradigm so evident in the hierarchical social structures of primates, with whom we have a strong genetic connection.

The author describes the main features of male-dominated primate social hierarchies - specifically, the role of the alpha male as the protector of the group; his sexual dominance and use of violence and oppression to attain food, females, and territory; in-group altruism vs. out-group hostility (us vs them); and displays of dominance and submission to establish roles within the social hierarchy. The parallels between these features of primate society and human religious rituals and concepts make it clear that religion, especially its oppressive and violent tendencies, is rooted in the deep evolutionary past.

This incisive analysis goes a long way toward explaining the historic and ongoing violence committed in the name of religion.

I am finally able to understand where my low self esteem is rooted. I can't thank the author enough for unveiling the horrible psychology housed in religious faith. Every woman on earth should read this book and put religion where it belongs...in the past.

A thoughtful look into alpha-male behavior in the animal kingdom-- humans included-- and how this hierarchical approach to tribal management is reflected in the establishment of religions. Worth reading, or listening to. Beautifully read by Seth Andrews.

Garcia's theory about the primate alpha male origins of our religious and social institutions explains a wide range of modern phenomena including racism, elitism, xenophobia, terrorism, even economic exploitation. I love the references to the original sources too. I highly recommend the book to all deep thinkers involved in public social discourse.

This book is well-researched and well written. Seth Andrews delivers an amazing performance in his radio quality voice. this is a must-read for anyone looking to understand the roots of religiosity among us human primates.

I really loved this book. I saw it advertised on a youtube video and decided to look into it and I'm really glad that I read it. I appreciate the way that the author both acknowledges his own perspective and points out when his perspective may be coloring things, but then justifies his position and moves on. I may not come to all of the same conclusions as he did on everything but it really made me think about how people think and act in a context I hadn't considered it before and it may give me a certain perspective and understanding behind behaviors I still find abhorrent. I couldn't understand why people felt hate until I read this and now I think it puts it into perspective. It doesn't make the behaviors behind that view okay but at least I better understand where they're coming from. Hopefully in time a greater understanding of such ideas might put people within the world in a better position to confront destructive and antisocial attitudes with a lens to adjusting the behavior through discourse and knowledge.

Extremely impactful book. I loved it 100% it’ll be something that I keep in mind long term

This book gives me a deeper understanding of our society. No doubt, it shall inform my view of the world henceforth.

so the book discusses violence in various religions but focuses mostly on Christianity from a darwinist materialist point of view. this book is definitely not for the faint of heart, brutal book to read. the problem with the authors thesis is he makes the faulty presupposition that all religion is about is seizing political power, the author having this moral relativist view that there is no good or evil, it's a might makes right thesis.

the book is openly hostile to orthodox Christianity comparing God the Father to an ape. the book even goes as far to promote eugenics, depopulation, and the overpopulation climate change hoax.

so to make a long story short the book promotes men joining religions simply to seize power and not truth.

In The Image of Man.

Why is God a man? More specifically, why does he exhibit so many of traits favorable to men? At least in ancient times. Is it a coincidence that God happens to emulate the desires of superstitious, violent, and bigoted men of the past? Or that men of the past created God in their own image out of an attempt to deceive or an overactive narcissism? Read this book, and then answer.

It was a good survey from an evolutionary perspective, but awful way of promoting a political prescription