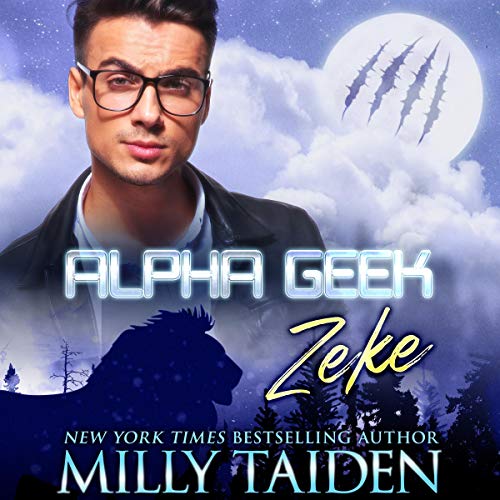 Lioness and personal security to the stars, Alexa Milan doesn’t do romance. But when she meets her latest job, she’s unsure how to proceed. The sexy geeky scientist is making her girl parts tingle and her heart do flip flops. How’s she supposed to focus on shooting the bad guys when it takes all her concentration to stop herself from tearing tall, pale, and geeky’s clothes off and riding him on his lab table?

Zeke Tristone has always hated being the weak guy. Family genetics cursed him, but a near-death experience allowed him to change his future. Now he’s big, strong, and alpha. He also has the biggest hard-on for Alexa. Getting her naked is at the top of his to-do list, along with finding clothes that fit.

Running from the bad guys almost gets Zeke killed, but Alexa and four needles to his neck keep him alive. Now he’s got more than big muscles to worry about. The dangerous animals inside him want her more than their next meal, but he’s holding back. He needs to ensure her safety from others...and himself.

Another very entertaining read from Milly Taiden. I like that the females of this series can all kick some tail with the best of them and that the men are the ones who need the ladies to 'protect' them. Well.... at least at first they do. I also really like the multi-animal shifter detail the author added. It gives the story a bit more excitement and intrigue. Well done to the author. I'm looking forward to listening to the next book.

I loved this story..... So much so that I searched the car for my headphones so that I could continue listening as I did the groceries...... The story was captivating and the characters where brought to life by the narrator and made the story jump out of the phone and into my mind.

I loved this book. It was so good and well worth listening too. A must read.

Well this is a great story..... how shifters came to be? This is sure something different and epic....
The fact that Zeke a gamer/comic book fan is ... I want him..I am not a DC fan...but I accept his way.. IT was a nice turnout for a shifter story and I look forward to listening to the rest..
Well done Milly Taiden

Alexa Milan is not thrilled when her boss assigns her to babysit the geeky Zeke Tristone, but once she sets eyes on him, she might change her mind. Her lioness says he is her mate, but Alexa doesn't believe that for one second. Zeke's science saved Knox, but he can't seem to replicate those results. He is determined to find the solution. When his own life is in danger, he urges Alexa to use the vials of his research to save him. After his change, Zeke revels in his new size and power.

If you're interested in a combination of the power of the mind and body, this is the book for you!

This is book 2 in the Alpha Geek series and is a stand alone book with a wonderful HEA. Zeke is the perfect geek and Alexa is the perfect kitty for him. The narrator does an awesome job of bring each character to life and taking you on their adventure. Recommend it all shifter lovers. Looking forward to the next book in the series.

New narrator for me who does a good job.

New narrator for me who does a good job.
I enjoyed this more in audible than eBook, which is very unusual for me. Probable due to the smoother flow of the story though I still picked up the same things wrong in the plot.
BOOK REVIEW
A good short and quick coffee time read.
Glad to see Ms Taiden is adding to this series.
This book is a good follow on from the original Alpha Geek, which is now Alpha Geek - Knox.
Though I loved the story and characters. I have to say this book needed smoothing out, another read through and tidy up. A bit jerky in places and too many proofing errors missed.
It was easy to know who the baddie was but that didn’t detract from the overall story.
Did find it strange that Alexa, being a trained bodyguard and shifter lioness, was taken down and unable to defend herself by a human.
Loved how Marie played into this.
Hoping we get another story with Marie and Brent maybe.

Thank you! Once again, an awesome listen! I cant wait for more audible. Loved it ♡

OMG. ABSOLUTELY AMAZING. THE VOICE OF THE READER DRAWS YOU IN AND DEFINITELY KEEPS YOU. SHE HAS A WAY OF BRINGING THIS BOOK ALIVE. IT IS FANTASTIC.

Lexi Evans does an amazing job with this ! Zeke and Alexa's story and boy is it so good !! We met Zeke in Alpha Geek Knox when he save him . Zeke is scary smart and so hot that Alexa , from the first site and scent was so drawn to him with her lioness growling MATE ! This is so fast paced that from the first you will be pulled into it ! This one has it all danger , drama , some twists and plots that will keep you going ! So well written and read that EVERYONE whom loves paranormal romance needs to grab this audible !