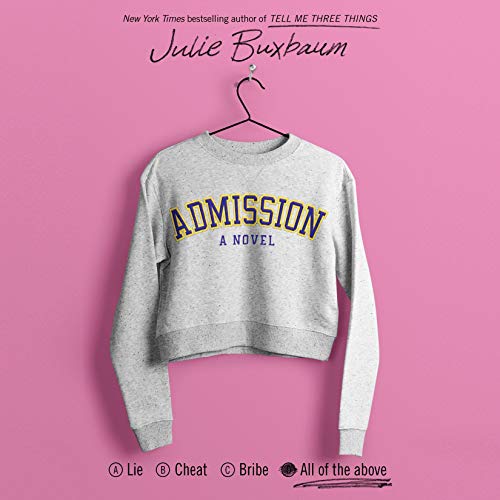 Lie. Cheat. Bribe. How far would you go to get into your dream school? How far would your parents go? Inspired by the recent college admissions scandal, this ripped-from-the-headlines YA novel by the New York Times best-selling author of Tell Me Three Things sees one teenage girl's privileged world shatter when her family's lies are exposed.

It's good to be Chloe Wynn Berringer - she has it all - money, privilege, and a ticket to the college of her dreams. Or at least she did until the FBI came knocking on her front door, guns at the ready, and her future went up in smoke. Now her B-list celebrity mother is under arrest in a massive college admissions bribery scandal, and Chloe might be the next one facing charges. The public is furious, the headlines are brutal, and the US attorney is out for blood.

As everything she's taken for granted starts to slip away, Chloe must reckon not only with the truth of what happened, but also with the examination of her own guilt. How much did she really know - or guess? Why did her parents think the only way for her to succeed was to cheat? And what does it really mean to be complicit?

Best-selling author Julie Buxbaum takes on the college admissions bribery scandal that rocked the country in this timely tale of the hyper elite and the hyper competitive, and the lengths they go to stay at the top.

Waaaaay too political and very divisive no resolution

I was looking forward to this because I really like this Author’s writing & the fact that it’s usually pretty clean. But as the plot unraveled and I kept waiting for it to resolve and get better, it doesn’t. The best friend ditched her when she needed a friend. All because she’s white, rich & “privileged”. And every person of color in the book is automatically a victim. This book feeds racist ideologies by not allowing either person to practice empathy for the other, they part ways because being white and rich is unforgivable. It doesn’t matter that she learned what she can do to be more aware. The friendship never heals. And the best friend of color stays angry, bitter, & unforgiving for something that the protagonist had no control over. How is this helpful?! It perpetuates the idea that we can’t have common ground and find commonalities for building relationships all because of our socio-economic and/or racial status. And therefore, we must be “separate, but equal.” This ideology sets us back like 100 years. I kept listening hoping for a resolution (because why else do we listen to fiction?!) but, nope. The only character who gets a happy resolution is the older brother who gets his 1 year sobriety chip at the end. Super disappointed. Will be asking for a refund.

This story was fantastic! Very interesting and it wasn’t fairytale-like at all. It seemed to play very well into social norms and privilege.